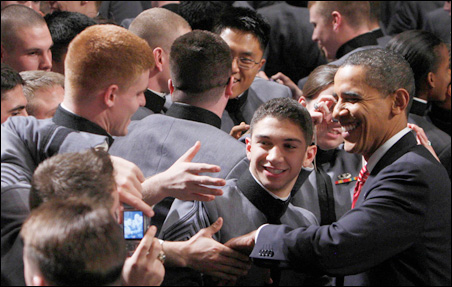 With considerable regret, I must report that I found President Obama’s big Afghan speech almost completely unconvincing. It was full of contradictions and raised many unanswered questions.

I’m neither a pacifist nor an isolationist, but I do believe that the United States uses its military too much in the world. But if I was convinced that 30,000 additional troops, who will reach Afghanistan in the spring of 2010 and will begin to come home in July of 2011, would bring significant goals to the goals of defeating Al Qaida, preventing the Taliban from returning to power in Afghanistan and reducing the chance that terrorists will acquire Pakistani nuclear weapons, I would say that those benefits would be worth the likely costs in blood and treasure. But President Obama provided little reason for a skeptic to believe that those benefits will likely be realized, and his promise that the benefits of the surge will “allow us to begin the transfer of our forces out of Afghanistan in July of 2011” was too vague to give me confidence against a quagmire.

The Pakistani nukes are a very serious worry. But the nukes are in Pakistan and the U.S. troops are going to Afghanistan. There was nothing in the speech to explain why the new strategy (which Obama has unfortunately chosen to call by the sad Bushian phrase “The Way Forward”) will secure the nukes in a neighboring country. Perhaps underlying the whole strategy is a secret U.S.-Pakistani understanding that makes this more believable. I hope so. But I can’t be convinced by what I haven’t been told.

We are told by reporters, and even the resigned-in-in-protest U.S. official Matthew Hoh, that many who are drawn to the insurgency in Afghanistan are motivated by the U.S. role in installing the corrupt Karzai government. Obama addressed the corruption in this passage:

“This effort must be based on performance. The days of providing a blank check are over. President Karzai’s inauguration speech sent the right message about moving in a new direction. And going forward, we will be clear about what we expect from those who receive our assistance. We will support Afghan ministries, governors and local leaders that combat corruption and deliver for the people. We expect those who are ineffective or corrupt to be held accountable.”

Personally, I do not expect that. Is there more reason than a few words in Karzai’s second inaugural to believe that it is so? I hope so.

The new way forward would seem to depend on a credible Afghan government more than ever. Obama’s argument that the recent Afghan election — “although it was marred by fraud — …produced a government that is consistent with Afghanistan’s laws and Constitution” felt kinda sad and pitiful, did it not?

Of course, the real key to the strategy, as described, is the build-up of an effective Afghan Army that will stand up, and take over the fight, so the U.S. troops can stand down and come home. It frightens me to think that this is a new idea in Afghanistan, but it is an old idea for selling an aging war to the U.S. public. Remember Vietnamization anyone?

Speaking of Vietnam, Obama took on the analogy directly, and disputed it. I appreciated that, and deeply, deeply hope that he is right about the comparison being inapt, but I found this passage also sadly unconvincing. He gave three differences to undermine the analogy:

I’m a big fan of learning from history and, like the president, I’m aware that historical analogism can be tricky. No two situations are identical. Obama’s distinction No. 1 is wishful thinking. There were U.S. allies in Vietnam too, and there are more now, but both wars were American wars, fought with vastly disproportionate levels of U.S. troops and U.S. dollars. I hope I will be surprised by the level of new troop commitments from some U.S. allies to the next phase of the war.

Obama’s distinction No. 3 works for me. Under international law, it is legal to use military power in response to an attack on your own country (not your elastically defined “interests”). I believe that — unlike any of the many U.S. invasions since World War II — the United States can make a very reasonable claim to be responding to an attack that emanated from Afghanistan, maybe even fighting in self-defense, although stretching that one all the way from 2001 to 2009 gets a little thin. But if the question is whether Afghanistan has the quagmire quality of Vietnam, I’m not sure No. 3 is terribly apposite. An invasion that starts from a legitimate grievance can still turn into a quagmire.

So I’m really hoping that Obama’s No. 2, the lack of popular support for the insurgency, is true (although if it true, it would seem a lot more valuable if the U.S.-backed government had more popular support).

But it’s cheating in the historical analogy game to look only at the differences and not mention the similarities between the two situations being analogized. In the Vietnam-Afghanistan analogy I would say that a few big ones are: 1. Afghanistan is far away from us but close to home — well, it actually is home — for Afghans. Time — and pertinency, too — is usually on the side of the home team. 2. Trying to win the war is unimaginably more costly to us than just trying to keep it going is to the Taliban-Al Qaida-anti-American side. And especially 3. A war against any enemy that isn’t an Army and doesn’t fight on the battlefield is not the kind of war in which having the greatest military power in the history of mankind is any guarantee of victory.

I admire President Obama and wish him well. I hope I’m wrong about everything above and he is right.

I liked when he dismissed the absurd Dick Cheney complaining about Obama’s alleged “dithering.” I liked the quote from Eisenhower (although it wasn’t as good as the two Bob Herbert used at the top of his Tuesday column).

I liked it when he told the audience of West Point cadets:

“As your commander-in-chief, I owe you a mission that is clearly defined, and worthy of your service.”

I wish I was convinced he had done it.