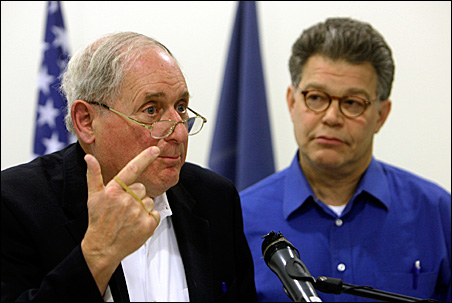 From the airport in Dubai as he heads home from a visit to Pakistan and Afghanistan, Sen. Al Franken expressed cautious optimism that things might be heading in the right direction and gave an impressively weak endorsement of the overall surge strategy that President Obama announced in December.

Franken cited a poll of Afghans, that showed they were optimistic about their future and that more Afghans support the Karzai government than support the Taliban, and said he had picked up a sense of optimism from President Karzai, Gen. Stanley McChrystal and “guarded optimism” from the U.S. troops he met during his brief visit.

In a conference call with reporters Franken clearly wanted to give an encouraging report but just as clearly couldn’t muster any real confidence or enthusiasm.

For example, pressed to say whether he now endorsed the Obama surge plan (which he has previously declined to support or oppose) Franken said the only vote he will have to cast will a vote for funds to support the 30,000 additional troops who will be arriving in the months ahead, and he will of course vote for it because you have to fund the troops. There was a similar tone of reluctant semi-support for the plan throughout the call.

Another example: When, after several such vague semi-endorsements, a reporter asked him to say flatly whether he endorsed the Obama surge or not, Franken said:

“The president has made his decision, froma list of options, none of them good… I don’t like sending 30,000 more troops there [a reference here to the military funerals he has attended]  I don’t want to see one more soldier go there than has to go there… The president’s plan is probably the best of a series of options that weren’t so great. I might have done some things differently but I will support him in this.”

Franken did seem almost enthusiastic about one aspect of the Obama plan, namely the announced (but vague and elastic) intention to begin drawing down U.S. troop strength in July of 2011. Franken said a couple of times that this may have been “kind of a brilliant touch” because it sent the message to President Karzai and his top military and police officials that they had better get cracking because the Americans won’t be there forever.

Recruiting for new Afghan police had spiked immediately after the Obama “surge” speech and, in fact, Afghan authorities have now cut off the recruiting becuase they don’t have enough trainers for all the new recruits. Franken  said this was probably because Karzai’s ministers “really got the message” that they will have be ready to defend and police the country, starting in 2011.

Franken traveled to Afghanistan and Pakistan in a delegation that included Senate Armed Services Chair Carl Levin of Michigan. In addition to visiting troops and bases, he met with Karzai and McChrystal. Although the additional troops have not arrived, McChrystal has been saying for a while that he senses an improvement in the Afghan situation.

For those who are looking for metrics by which to measure the success of the strategy, Franken suggested we measure “how we’re doing in those districts” and “how we’re partnering with the Afghan Army and police.” As you can see, those are not really metrics that can measured, and Franken acknowledged as much. He said that when he pressed McChrystal for measurements, the general said “forget numbers. You can’t measure it with numbers.” The signs of success will things like “Is there freedom of movement, do people feel secure?” Things like that are hard to measure.

Franken has previously expressed skepticism about whether the Karzai government was the credible, reliable partner the U.S. needs. “There is still reason to be skeptical” about that, Franken said, but he felt a little better about it after his visit. He described Karzai as “a very charismatic guy,” and said that although Karzai stole the election last year, he would have won anyway.

But he said that Afghanistan doesn’t have much history of being governed by a strong national government and has a history of corruption, tribal enmities and other factors that complicate the task. He said that when the delegation asked U.S. Ambassador to Afghanistan Karl Eikenberry about these issues, every answer started with “it’s complicated” — so much so that the group started laughing (not mockingly, Franken said) every time Eikenberry used the word “complicated.”

During the brief Pakistan portion of the trip, Franken concluded that the Pakistani military had “made some excellent steps in pursuing the violent extremists, especially in the Swat Valley,” and also in South Waziristan and that the Pakistani people supported those efforts. Franken said he got “mixed signals” on whether the Pakistani government was really trying to capture or kill elements of the Afghan Taliban who take refuge in Pakistan while conducting operations across the border in Afghanistan. It’s complicated.

He said he didn’t get the feeling that the government of Pakistan is “ontologically insecure” or about to be overthrown, although Pakistani President Zardari has continuing legal problems.

Franken’s report from Afghanistan: A lukewarm endorsement of the surge