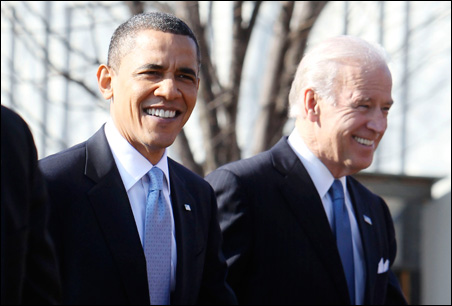 REUTERS/Larry Downing
President Barack Obama and Vice President Joseph Biden walk towards the Blair House before the beginning of a health care summit on Thursday.

On the occasion of the big bipartisan health care summit (which is today, starting at 9 a.m. central time, although it’s not clear that you can watch it all live on TV unless you get C-SPAN 3), I was working myself up to write a piece blasting Republicans for one of their talking points that I consider illogical and hypocritical. But the hypocrisy on this one is bipartisan.

For starters, the talking point to which I refer is the Repub complaint that the Dems can’t really be seeking bipartisanship if, while they are supposedly negotiating with the Repubs, the Dems are simultaneously scheming to pass the hated-grandma-plug-pulling-big-government-takeover-bill-that-has-been-rejected-by-the-American-people via the “reconciliation” process without any Republican votes.

Why do I call this talking point (I’m talking about the reconciliation angle — I just threw in that grandma-and-big-government stuff to be funny) illogical? Because it is perfectly reasonable for the Democrats to take the following position, and in fact I believe this is their true position:

We would like to pass a comprehensive health-care bill, that accomplishments the main objectives we’ve been talking about all year, through the normal, non-reconciliation process. And if we can agree on some changes that will make it a bill for which  Republicans can vote, we will make those changes. We are here to ask, in good faith, whether you can specify some changes that will make it a bipartisan bill. If you do, and if we feel we can embrace those changes, we will have a bill and reconciliation will be off the table.

But we have never heard from the Republican leadership a set of changes that will turn this into a bill for which Republicans can vote. You say you have health care ideas, but not that putting your ideas our bill will get your support. We suspect that there is no such compromise available. We fear that your real plan is to prevent any bill — or any bill that reflects the main elements of Democratic thinking on the topic, or any bill that might give us a record of accomplishment on which to run for reelection — from passing. When you say, “Take the whole bill down and start from scratch,” we hear, “Let’s make sure this is nothing that can pass this year.”

To suggest that we should guarantee we won’t use reconciliation would be like an employer negotiating with a union and saying, “To prove that you are negotiating in good faith, you must guarantee that whether or not we can agree on a contract, you will not strike.” In fact, it would be roughly like us saying today: We will assume that you didn’t come here to negotiate with us in good faith unless you promise us right now that you will not filibuster our bill.

Frankly, I think that the Repubs are not negotiating in good faith. They aren’t really negotiating at all. And I think the Dem strategy is to use this summit as one last effort to either make a deal or to demonstrate for public relations purposes that they tried to make a deal. And if they can’t, to move to a reconciliation strategy. And, given everything that led up to this point, it’s a reasonable strategy.

Repubs apparently think that using reconciliation to get around a filibuster is fine when they hold a less than 60-vote majority. But if the Dems were to use it to pass a health care bill, Repub. Sen. Judd Gregg of New Hampshire has said it would be “an act of violence against the system here in the Senate.” Repub Sen. Kit Bond of Missouri, who supported reconciliation when his party used it, said it would be a “steamroller” tactic that Obama must have learned in Chicago, where “they coat them in cement and drop them in the river.”

So, yes, I had myself all primed to write about Repub hypocrisy on the idea of using procedural tricks to get around the filibuster.

But then someone sent me a link to the video below (John Iacono also mentioned it in one of yesterday’s threads) of various Dem senators in 2005 — and we’re not talking just any Dem sens, we’re talking Barack Obama, Joe Biden, Hillary Rodham Clinton and  Harry Reid, among others — expressing their outrage over the suggestion that the Repubs would use an aggressive procedural tactic, based on a friendly ruling from Dick Cheney, to allow the Repubs to break the Dem filibusters against several Bush judicial nominees.

That kind of “majoritarian absolute power” is “not what the Framers intended,” said then-Sen. Obama. (By the way, the framers had nothing to do with the filibuster.)

“The right of extended debate is never more important than when one party controls Congress and the White House,” said then-Minority Leader Harry Reid. (By the way, as practiced in modern times, the filibuster has nothing to do with limiting debate. It has to do with allowing a minority to prevent the majority from voting on a bill.)

“We are on the precipice of a crisis, a constitutional crisis,” said N.Y. Sen. Chuck Schumer (by the way, the right to filibuster is not in the Constitution). “The checks and balances which have been at the core of this republic are about to be evaporated…” (By the way, the filibuster does not go back to the earliest days of the repubilc.)

Sen. Chris Dodd of Connecticut said he had never passed a bill worth talking about without a Republican co-sponsor, which I doubt, but then upped the ante and said there had never been any bill passed without sponsors from both parties.

Then-Sen Biden called what the Repubs were trying to do “an example of the arrogance of power,” and upped the ante by saying that he “prayed God” the Democrats would never do such a thing if they ever got into the majority again.

Well, you get the idea, but I implore liberals and Democrats especially to force yourselves to watch this video.

A friend of mine recently told me that the best rule of thumb is that procedural arguments are insincere roughly 100 percent of the time.

I called filibuster expert Steve Smith of Washington University and asked him whether there was any such thing as principle in these matters. He said 100 percent was a little too high, but “my perception would be that 98 percent of senators are hypocritical, and baldly so, on these issue. When there’s a change in majority control, I swear to God the members of both parties go into a dark room and swap their speeches on Senate procedures.”

My final thought is that the filibuster itself (not in the Constitution, not created by the Framers, nothing to do with preserving the right of debate) is the core of the problem. If it continues to be used as heavily as at present, frustrated majorities will seek more and more creative procedural gimmicks to reach a final vote. I know it isn’t happening any time soon, but the most fundamental fix would be to get rid of the supermajority requirements (except the ones in the Constitution). In other words, majority rule with protection for minority rights, but I’m talking the rights in the Bill of Rights, not the right of 41 percent to prevent the majority from taking a vote. And that will be my position whichever party is in the majority.