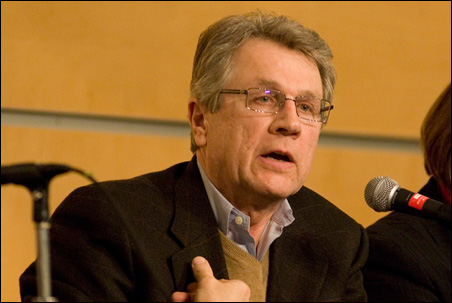 If DFLers really believe (and I don’t doubt that they do) that the Independence Party has been costing DFLers statewide races over recent cycles, they should enact Instant Runoff Voting (IRV, also known as Ranked Choice Voting) as soon as they are able. That could be next year if the DFL wins the guv’s office, although it would probably be several more years before IRV would be ready for statewide races.

The IP is totally solid for IRV, for obvious reasons. Under IRV, anyone inclined to vote for the IP could do so without worrying about the wasted vote syndrome. The logic of that syndrome is a killer for third parties since many voters figure that either the Dem or the Repub is going to win, and voting for a third party, like the IP, means their vote won’t really count in determining the winner. So, many potential IP voters (no one knows how many) choose the lesser of two evils from the major parties.

Under ranked-choice, that voter can cast their first-choice vote for the IP and their second choice for whichever major party they view as the lesser of two evils. If the IP finishes third and neither the Dem nor the Repub gets 50 percent of the vote on first-preference ballots, then the second-choice ballots of the IP voters would quite likely determine whether the Dem or the Repub candidate wins.

I’m mostly sold on the principled arguments for IRV: basically, why settle for a plurality winner when you can have a majority winner? And, because the IP is the strongest state-based third party in the country, Minnesota is much more likely than most to have a plurality winner. The 2008 U.S. Senate race plus the last three races for guv have been decided by plurality. I expect the 2010 race will be as well.

But this post is more about the partisan analysis of who would gain and who would lose under IRV. As I said above, IP-ers are solid for IRV. Both of the IP’s top candidates for governor, Tom Horner and Joe Repya, are listed as IRV supporters.

This could be based on some important principle, but I assume it is mostly because Repubs believe IRV will not increase their chances of winning statewide elections in Minnesota. I assume they share the common DFL view that IP voters, if they could express a second choice, would choose the DFL candidate. (For some reason, with all the polling that is done, we don’t have polls that clearly indicate the second choice of IP voters.)

DFL is pretty sold for IRV

Until I talked to Jeanne Massey of FairVote Minnesota over the weekend, I hadn’t realized how solid the DFL was for IRV. Seven of the nine remaining DFL candidates for governor (all except Tom Bakk and Susan Gaertner) are listed as supporters. All of the DFL’s top legislative leaders (Speaker Margarent Anderson Kelliher, House Majority Leader Tony Sertich, Senate Majority Leader Larry Pogemiller and Assistant Majority Leader Tarryl Clark) are supporters.

On Saturday’s Strib op-ed page, former DFL congressman and 2002 IP gubernatorial nominee Tim Penny, made the principled case for IRV. He said it had nothing to do with partisan advantage, although the advantages of IRV to the IP were thinly veiled.

Just below Penny on the Saturday page, Jim Lenfestey piece, headlined “Third parties are nothing but trouble,” bemoaned the recent trend of plurality winners. But Lenfesey never mentioned IRV, although it would seem that IRV would be the solution to Lenfestey’s problem, unless of course, DFLers are worried that IRV will lead to the IP actually winning some of the elections. (IPer Jesse Ventura did, of course, win in 1998, with 37 percent of the vote).

Come to think of it, although Penny finished third in the 2002 race for guv (it was Pawlenty 44 percent, DFLer Roger Moe 37, Penny 16), Penny likely believes that he would have won, or perhaps finished in the top two, if not for the wasted vote syndrome. I can’t say if that’s true or not, but Penny was polling much higher earlier in the race. And there is a strong historical pattern of third party candidates fading in the stretch, presumably as their supporters lose confidence that their guy can win and start to apply the wasted-vote, lesser-of-two-evils logic. (Jesse Ventura is obviously a big, local, recent exception to this general historical rule of thumb. But the fade-in-the-stretch pattern happened to Ross Perot twice and John Anderson in 1980. And it seemed to happen to Penny in 2002.)

I do believe this. IRV would probably help the DFL beat Republicans in close races. It will also help the IP make a stronger showing in the first-choice voting. If the IP starts breaking into second place, under IRV, I believe the IP will win most of those elections on the obvious (but seldom remarked) logic that both DFL and Repub voters are likely to rank the IP ahead of the other major party.

If Minnesota adopts IRV for statewide races (it’s already adopted for Minneapolis, will be tested in St. Paul’s municipal election in 2011 and Massey said it looks likely that Duluth will follow), we’ll get some big tests of that proposition.

If The DFL nominee wins for guv this year (every handicapper rates the race a toss-up at this point), and assuming the DFL still controls the Legislature, the votes and signatures will probably be there for IRV to be applied to statewide races.

FairVote Minnesota has been operating on a long-term plan, bubbling up from the municipal elections, but they have always said their goal was to eventually go statewide. Massey said it would be a mistake to rush things. It’s vital that the system and the machines all be tested and proven before the big statewide application. Most of the current machines couldn’t handle IRV scoring, so the ballot would have to counted by hand. New machines, that could be programmed for IRV, will be adopted around the state during this decade. Massey suggested that the earliest practical date for a statewide IRV election is 2018, mostly because of the new machines.

The DFL platform had a pro-IRV plank in 2008 and likely will again this year. Massey still seems focused on the step-by-step plan. But if the DFL holds the guv’s office and controls both houses of the Legislature in 2011, it would seem crazy for IRV backers not to push for a law that would schedule IRV for statewide implementation as soon as the system and the machines are ready.