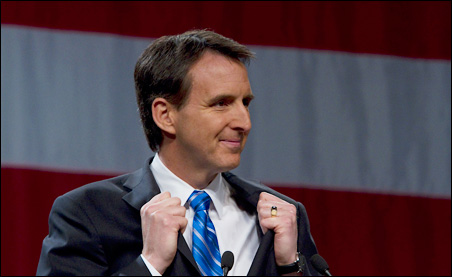 MinnPost photo by Terry Gydesen
Gov. Pawlenty: “Wall Street gets a bailout. The poor, understandably, get a handout. The rest of us get our wallets out.”

Gov. Pawlenty’s speech to the Repub convention didn’t exactly rock the hall, but it was solid Pawlentyism and appropriate to the occasion.

He spent enough time on national issues — I would say roughly half national, half Minnesota — to make clear what he’s thinking about. He ran through the litany of alleged new taxes and expansions of government authority under Obama, ending each with the refrain “Have You Had Enough.” In each case, the delegates said yes they had.

He also made clear that Republicans will run hard this year against the idea of a state-based single-payer health care bill. He brought it up twice, noting that DFL endorsee Margaret Anderson Kelliher favored single payer and that some of her endorsement rivals, when they threw support to her, said it was because she was more enthusaistic about the single-payer plan than her chief opponent, R.T. Rybak.

Here are the laughlines from the speech:

We meet here a short time after April 15, which most Americans call “Tax Day.” Or, “as Democrats like to call it, Christmas.”

More people died from the Hiawatha Light Rail line than from concealed carry in Minnesota.”

“Wall Street gets a bailout. The poor, understandably, get a handout. The rest of us get our wallets out.” (Note that “understandably.”)