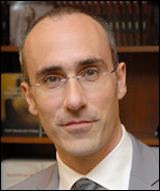 Arthur C. Brooks is a smart, serious scholar and propagandist for conservatism.

That word “propagandist” sounds a little judgmental doesn’t it? I could have said “spokesman” and it would be just as accurate without sounding like one of those veiled insults.

But Brooks — president of the American Enterprise Institute, who spoke in Minneapolis Wednesday to a luncheon of the Center of the American Experiment — is quite strategic in his own word choices.

Take his current best-seller, titled “The Battle,” which was the subject of his well-received Wednesday luncheon address in Golden Valley. Its subtitle is “How the Fight between Free Enterprise and Big Government Will Shape America’s Future.”

If a lefty had written it, perhaps it would have been something like: “Should your elected representatives be on the side of Big Business or average Americans?” Well, that wouldn’t make a very good subtitle, but it would certainly let you know which side the author thought you should be on.

Based on various poll results and other data, Brooks argues that America is a “70-30 nation,” in which 70 percent of the country favors “free enterprise,” while only 30 percent wants to see the government use its power to “redistribute income.”

“The idea of forced income redistribution is loathed by Americans,” Brooks said. I wonder if he has looked at poll results on what Americans think of Social Security. (The promoters of Social Security pulled off a pretty good semantic coup back in the pre-Orwellian 1930s when they came up with that two-word phrase, didn’t they? I wonder how close they came to naming the public pension system “forced income redistribution from workers to old people.” At least it would have had a cool acronym: FIRFWOP.)

Anyway, Brooks is smart, articulate, factual (as long as he gets to choose the facts and the words used to describe them). And I don’t doubt his sincerity when he studies the data and comes to the conclusion that most Americans want to buy the three things the America Enterprise Institute is selling, which — and these are his word choices — are “expanding liberty,” “increasing individual opportunity” and “defending the free enterprise system.” These controversial goals must be defended,  Brooks said, against what he called “a culture war on free enterprise.”

Well, as you can tell, once I started, I couldn’t stop obsessing on Brooks’ skillful word choices. In his book and in his talk, he made three main arguments: