Last week, I launched small project called Taking Tentherism Seriously. Tentherism refers to those small government conservatives who argue that the federal government has expanded way beyond its constitutional limits, which are summarized by the Tenth Amendment.

The Tenth Amendment pretty much says that the federal government can do only those things it is empowered to do, more or less explicitly, by the language of the Constitution, as that language was understood by the framers (this is a little sleight hand in which I’m linking Tentherism to “Originalism” as the proper way to interpret the Constitution).

I have in mind a couple of posts about anecdotes, from the early days of the republic, raising questions/challenges about both Tentherism and Originalism. This post is about a shameful episode from the early constitutional period when Congress passed, and President John Adams signed laws that blatantly violated the First and the Tenth Amendments.

Originalism depends on the ability of modern day justices to understand what the words in the Constitution meant to those who wrote and ratified them. Anecdote 1 is troubling for several reasons, but may be a special challenge to Tenthers and Originalists because it calls into question whether those men who participated in the drafting of the first 10 amendments (aka The Bill of Rights) were very serious about accepting the limits that they themselves have help place on federal power.

Anecdote 1:
It’s 1798. John Adams is president, having narrowly defeated Thomas Jefferson in the 1796 election. Adams and Jefferson, who had once been friends and would become pen pals after their retirement, are bitter rivals in 1798. 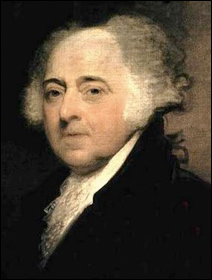 The framers of the Constitution, and the founders in general, had hoped that American politics could develop without political parties. No such luck.

In fact, the division of factions into the “Federalists,” starring Adams and Alexander Hamilton (although they were also political foes), and the Democratic Republicans, starring Jefferson and James Madison (the modern Democratic Party often traces itself to this faction, which is also ironic in light which party favors a bigger federal government) is quickly becoming (in the 1790s) the first U.S. version of the two-party system.

Under the quaint, curious and discombobulated Rube Goldberg contraption known as the Electoral College system, before it was substantially amended (see 12th Amendment to the U.S. Constitution), Jefferson, as the runner-up in the election, is Adams’ vice president. But the two are estranged and have no personal contact as they both prepare for a rematch in 1800.

France (during the French revolutionary period) and England, are at war. Federalists favor England, Democratic Republicans favor France. Adams hopes to stay out of the war. The United States never does enter the war fully, but real acts of naval warfare occur between French and U.S. ships. Historians sometimes refer to this as the Quasi-War.

Democratic Republicans, who like to portray Federalists as lapdogs of the Brits, are harshly critical of what they believe is the drift toward war with France. Federalists, who control Congress, pass a series of laws known as the Alien and Sedition Acts, which are hyper-partisan and are designed to hurt the Democratic Republicans.

The crackdown on aliens is substantially intended to prevent foreign-born residents from becoming citizens. This is at least in part motivated by Federalists belief that most aliens who become citizens will become Democratic Republicans. This may be in some sense a precursor to the modern immigration law issue, but let’s not go there today.

The Sedition Act, on the other hand, is among the most unconstitutional laws ever passed. It makes it a crime, punishable by imprisonment, to:

In other words, no criticizing the government (although technically the criticism has to be false, scandalous or malicious). Under this law, 25 men, many of them editors of Democratic Republican newspapers, were arrested and prosecuted. Sopme went to prison. In many instances, the newspapers were shut down.

Repeating for emphasis: In 1791, the First Amendment to the Constitution was ratified, clarifying that Congress could pass no law abridging freedom of speech or press. There have been tough questions since then on what the limits of this guarantee might be. But this is not one of them. Arresting people for criticizing the government. And shutting down opposition newspapers. In the United States of America. When there wasn’t even a real war on. Is an unconstitutional law that violates the First Amendment.

You could say it also violates the 10th Amendment, also ratified in 1791, because the Constitution did not empower Congress to regulate the press. In fact, the Constitution, as amended, ordered Congress to do no such thing. (Jefferson and Madison made exactly these arguments against the Alien and Sedition Acts. I’ll get to that in the next installment.)

To his credit, President Adams did not propose this law. To his shame, he signed it and his administration enforced it, actually sending people to prison under it (although the sentences were short and the Sedition Act was adopted with an expiration date of 1801).

John Adams was not one of the framers of the Constitution. He probably would have been, since he was one of the authors of the Declaration of Independence, an expert on constitutionalism, a top lawyer and a leading Massachusetts political figure of his time. But Adams was the U.S. ambassador to Britain at the time of the Philadelphia Constitutional Convention.

Adams was, however, back in the U.S.A. during the debates over ratification, and was around for the congressional debates over the Bill of Rights, including the 1st and 10th Amendments. As vice president, he was the presiding officer of the Senate when the amendments came through Congress. He is clearly among the group we refer to as the Founding Fathers, and his understanding the 1st and 10th Amendments would have been as good — and as relevant to the real original meaning — as anyone’s, except possibly those who participated in the writing and ratifying of the Constitution and the Bill of Rights.

Question 1 raised by Anecdote 1: In the context of understanding what the Founding Generation meant by the 10th Amendment, what are we to make of John Adams’ signature on and enforcement of the Alien and Sedition Acts or by the enactment of the Alien and Sedition Acts by a Congress full of members who participated in the creation of the Constitution and of the 1st and 10th Amendments?

It’s a tough one.

Debate over Tentherism: Some history to consider