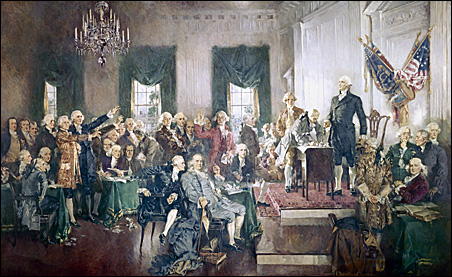 aoc.gov
The framers of the U.S. Constitution: What federal power did they envision?

The impulse that is sometimes called Tentherism is part of the larger small-government conservative movement. Tentherism is an effort to take the 10th Amendment seriously. The amendment states:

“The powers not delegated to the United States by the Constitution, nor prohibited by it to the States, are reserved to the States respectively, or to the people.”

But lately, the 10th has become a leading talking point for small government conservatism. When Tenthers see a proposal for a federal law or program they don’t like, they are wont to say, “Show me in the Constitution where the federal government is empowered to:  take over the health care system, set a national speed limit, bail out auto companies, bail out Wall Street, set minimum wages, require someone who doesn’t want health insurance to buy it,” etc. 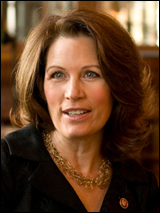 Some of Rep. Michele Bachmann’s statements about the constitutional limits on the power of the federal government and some of Tom Emmer’s legislative ideas for using state law to challenge federal power give new Minnesota currency to the Tenther momement and its theme of the runaway federal leviathan.

For example, in arguing on the “Hannity” program last year that the ObamaCare bill was unconstitutional,  Bachmann said:

Where does the questioning end?
But it sometimes seems when Tenthers demand to see the Constitutional enumeration for something that Congress has done, they are usually using the logic of the 10th to oppose on constitutional grounds something they already oppose on political/ideological grounds. Do they believe in strict constructionism as an inviolable principle, or only when it advances their own agenda?

Shortly after Bachmann started calling the Obama health bill unconstitutional, I tried to ask the congresswoman, via her staff, whether she felt that the 1965 creation of Medicare likewise exceeded the bounds of constitutionality. Medicare, essentially a single-payer system for the elderly, comes closer to being a “national takeover of health care” — at least for the over-65 set — than the Obama approach of new federal regulations over the health insurance industry.

Bachmann didn’t reply at the time, but I resubmitted the question as I started working on this post and I did hear back (more below). I suppose my question was obnoxiously passive-aggressive, but also a sincere effort to take Tentherism seriously. Perhaps that’s also a mean trick.

In the case of Medicare, there may be some small-governmenters who would truly like to see it go away. I don’t claim to know. As a matter of political reality, no one who hopes to seek election or reelection to public office dares to say so. Not even Bachmann and Emmer have suggested that Medicare should be struck down as an overreach of federal gigantism.

But that’s the point, at least of this post. If Tenthers are serious about the principle — if they are not just engaging in “results-oriented” Tentherism — why aren’t they also asking: “Show me in the Constitution where the federal government is authorized to create Social Security, set up national parks, or do anything to protect the environment, or declare national emergencies and provide aid to flood victims, or plug oil-spewing holes in the floor of the Gulf of Mexico?”

And speaking of health, where in the Constitution is the federal government empowered to provide lifelong health benefits to military veterans? Are tenthers bothered by this? And speaking of federal activities that many conservatives approve, which enumerated power of the president allows him to start undeclared wars? Which branch, if any, is empowered to create and indefinitely maintain dozens — or is it hundreds — of foreign military bases? Any basis to believe that this is something the Framers envisioned?

And speaking of things that we all just assume are in the Constitution, here’s a real mind-blower: Where exactly does the Constitution empower the U.S. Supreme Court to strike down laws duly adopted by the Congress and signed by the president? Go ahead, look for it. Ain’t in there. Not if you believe that federal power is strictly limited to those authorities that are explicitly enumerated in the text of the Constitution.

The 10th Amendment is in play, at least on the political/rhetorical battlefield. But if you take it seriously, it’s a mind-bender. So I renewed my question to Bachmann: Is Medicare covered any of the enumerated powers of the federal government? If so, which power? If not, what does she think should be done about it.

I did hear back, from Bachmann press secretary Rachel Horn, as follows:

“As a State Senator, Congresswoman Bachmann saw what happens to a state budget when Washington dictates services States must provide to the people.  The 10th amendment was included to prevent those kinds of situations and to preserve the small government principles the Founders preferred.  It clearly outlines that powers not given to the Federal level of government are for the individual states to deal with as they see fit.  The federal government overstepped its boundaries with the health care bill and essentially took the right to regulate and legislate health care away from the states.

“Massachusetts is the perfect example in the case of health care, they went ahead with health care reform on their own, and they have that right. And now every other state can learn from Massachusetts’ system and address health care accessibility and affordability in a way that will best serve their individual constituencies.

I replied that Horn’s statement is slightly helpful but doesn’t address the main point of my question. “If Congress can’t do anything that isn’t explicitly enumerated, I don’t see how Medicare (also Social Security and a great many other federal programs) would be constitutional. I would like to know whether Rep. Bachmann believes the creation of Medicare was also unconstitutional, and if so, what should be done about it…

“I am interested in taking Rep. Bachmann’s view of the 10th amendment and strict construction of the constitution seriously. But if it is serious, she can’t cherry pick particular federal actions with which she disagrees for 10th amendment scrutiny.”

I asked for further guidance on the question. That was just a few days ago. I’ll keep asking, and I’ll also go a bit deeper in a couple of future post about taking Tentherism seriously.