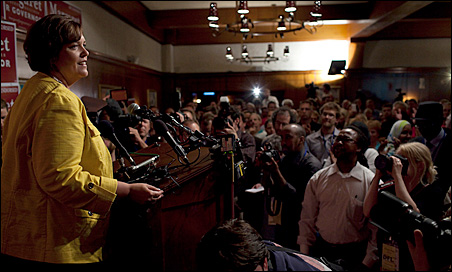 As you’ve probably figured out by know, Sen. Al Franken has had to rein in his formerly outrageous sense of humor. Even safe jokes aren’t politically safe coming from Franken. But at Jax Cafe last night, the former satirist/comedian managed to make a mild joke that perfectly predicted the next few hours of torment.

I think it was about 9 p.m. Franken took his turn warming up the crowd. The Twins were ahead, well ahead, against the White Sox in a pretty big game. Margaret Anderson Kelliher was also ahead in the early count of the primary. Said Franken: “The question is: Can the Twins build a big enough lead to withstand the late returns from St. Louis County?”

Not really that funny. But dead on correct, as things will turn out.

Jax was crowded, noisy, festive, then tense. The room was jammed with familiar DFL faces. Early on, the buzz was that MAK had exceeded expectations in Ramsey County. She was up by double digits. Every half hour or so, someone would address the crowd. DFL Chair Brian Melendez took the first turn, announcing that anecdotal evidence coming in from the field suggested that the undecided voters (and there were a jillion of those, in my own limited sample) were breaking toward Margaret.

The early mood was on the high side of cautiously optimistic, and Doug Grow, who was MinnPosting from Dayton headquarters, confirmed that the early mood there was glum.

The crowd at Jax wants a win not just for MAK (which they do) or for the first woman nominee (which they do) or for the candidate that they believe will give the DFL its best chance against Tom Emmer (whom they believe is Margaret), but also a win for the endorsement process, and that win would be especially sweet if it came in a low-budget effort against two self-financing millioinaires.

Sen. Amy Klobuchar took the stage early and said that if Margaret wins, “it will be a grass roots win,” which was a reference to that angle.

House Majority Leader Tony Sertich, acting as master of ceremonies, told the crowd that he had received a call from his good friend Tom Emmer. Emmer (Sertich claimed) wanted him to tell the DFLers at Jax to be sure and tip their servers generously. As you can imagine, that brought down the house.

As you know by now, Kelliher’s lead never got any bigger than it was in the first hour, with those good Ramsey returns. The lead lasted almost all night, on a big screen where results posted by the secretary of state’s website were displayed. But it kept shrinking.

Around the room, there was a quest for a new conventional wisdom, in which a big turnout could be good for MAK, perhaps because the vaunted DFL get-out-the-vote campaign had exceeded all expectations.

Kelliher running-mate John Gunyou spoke, emphasizing again that the Kelliher campaign was “people-powered” in contrast to its opponents’ reliance on TV ads. He said that as of the poll closing hour, Kellliher/DFL phone bankers had called two million voters, 100,000 of them on Tuesday alone.

Gunyou said that as an Air Force veteran, he hated to admit it, but in this race “it’s not the air war that wins. It’s the ground game.” This got a cheer, but slow steady shrinkage of Kelliher’s lead on the big board was deflating the mood.

At Dayton headquarters, the candidate has remained accessible to press and supporters all through the evening. But Kelliher is following the tradition of remaining in seclusion, apparently at the home of a friend in the neighborhood, until she is ready to either concede or announce that her opponent has conceded.

Her lead keeps shrinking. Now there’s talk of a recount, which will apparently be triggered if the final margin is 2,000 votes or less.

As we head toward midnight, the big screen still shows Kelliher ahead (although now within the recount range) but those in the room who are getting an Associated Press feed know that votes, not yet on the SOS website, have put Dayton ahead. There’s an awkward 20 minutes or so, with half the people in the room seeming to know the bad news, and half still staring at that screen where Margaret’s microscopic lead is still displayed.

I ask Melendez what he knows about where the last uncounted votes are located. He says the most common rumor is that most of the late votes are in St. Louis County, but that everything he knows is coming from David Brauer’s Twitter feed. Nice going, David.

At 11:55, the AP says Dayton is ahead by 335 votes. The big screen is still way behind. Every update is bad news for the MAK supporters.

Now Dayton’s lead is outside the range that would trigger a recount. We still haven’t seen Kelliher all night. Klobuchar has made a second appearance to try to pacify the crowd. Keith Ellison also tried to lift spirits.

Now it’s 12:30 and there is a lot of bustle near the stage. Gunyou and his family are assembled near the stage, a path is being cleared, presumably for the candidate herself, and it seems palpable that Margaret will concede momentarily.

She appears, striding purposefully through that path, stops to hug Gunyou, she has as big a smile as I’ve ever seen on her, but the eyes are not smiling. Then, surprisingly, she says no, she’s not ready to make an announcement. She’s “optimistic” that the last votes will improve her situation. She’s on the stage less than a minute. A powerful sense of anti-climax as we are told that that’s it for tonight.

Wednesday morning, Kelliher spokester Matt Swenson tells me MAK will make an announcement at 3 p.m. at a location to be determined.

A night with the Kelliher campaign: She has a big smile, but her eyes are not smiling