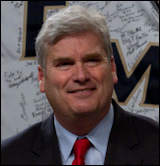 At the Minnesota Chamber of Commerce-sponsored Nisswa debate last week, which I have been obsessively fact-checking ever since, Repub guv nominee Tom Emmer said to Mark Dayton, with reference to education funding:

Emmer: “Senator, if dollars were the answer we would not have a 60 percent dropout rate in the Minneapolis schools and those kids would be succeeding in closing the achievement gap. And it’s not happening…

“The issue is not dollars. The issue is the union is standing in the way of any real reform in the state. Senator, if you follow the path that the union [Education Minnesota] that just endorsed you wants you to follow, we will not get alternative teacher licensure, we will not get the accountability measures that we must have and we’ve gotta have pay for performance in some fashion. Where else in our society does someone get to keep their job simply because they’ve been there the longest?”

A lot of assertions and issue positions are packed in there, but really only one fact that can be checked. And that fact is wrong. The Minneapolis School District does not have a 60 percent dropout rate.

Emmer acknowledged as much when I asked for backup for that statement. Emmer spokester, Chris Van Guilder, says Emmer “misspoke.” Van Guilder e-mailed:

The second version of the statement is defensible. There is no way to accurately claim that Minneapolis has a 60 percent dropout rate, but there are ways to claim that Minneapolis has a graduation rate of 60 percent and even lower than that. But those ways are oversimplifications, especially if you don’t define “graduation rate” and if you assume that a 60 percent graduation rate means a 40 percent dropout rate. (That’s what I would have assumed, until I got educated by researching this fact-check). Most of what follows was explained to me by Dave Heistad, research chief of the Minneapolis School District.

If all kids either graduated from high school within four years of when they started or dropped out of high school and never came back, and if the schools kept track of every kid, this would be fairly simple. But that ain’t the case. Some kids are still in high school for a fifth or a sixth year, still trying to graduate. You can’t count them as dropouts until they stop trying to graduate, right? And there’s another category of kids who attend a Minneapolis high school for some period, leave, and the district loses track of them.

There are also multiple ways of dealing with these possibilities for purposes of calculating a dropout or graduation rate. One simple way — which is how Minneapolis reports its graduation rate to the feds — is to count only those kids whom the district knows have either graduated or dropped out. This method is sanctioned by the U.S. Department of Education and is used by Minneapolis to report its results to the feds for “Adequate Yearly Progress” measurement under No Child left Behind.

By that measure, Minneapolis had a graduation rate of 76.36 percent in 2009, and a dropout rate of 23.64, according to Heistad, which would be a heckuva lot better than Emmer said at the debate or even what he meant to say.

The National Governors’ Association (NGA) has been pushing a more complicated, and I would say more accurate, measurement that sorts kids into four categories: those that graduate on time, those that are still trying after their fourth year, those that have dropped out, and those whose status is unclear because they have transferred away from the district where they started. According to Emmer spokester Van Guilder, this is the methodology used by the Minnesota Department of Education and the one Emmer had in mind when he spoke at Nisswa.

Here’s how Minneapolis looks on that one for the most recent year available:

(There’s yet another round of numbers in which those who graduate, or who stop trying, during their fifth year is taken into account. By then, Minneapolis shows 50.95 percent have graduated, 19.57 percent have dropped out and the rest are either still trying or lost from the accounting.)

According to those numbers, Van Guilder said, if you grant that Emmer’s reference to dropout rate was supposed to refer to a 60 percent graduation rate, Emmer was not only accurate but generous.

Anyway, perhaps you see why I say Emmer’s statement, once you turn dropout rate into graduation rate, is defensible, but quite likely misleading, since it disregards a significant number of students who are still working toward their diplomas and another number who may have graduated.

Now, if you can stand some good news — I would say surprising good news, considering the degree to which the entire political discussion of the public education system seems to be about what is wrong with it — Heistad noted to me that the Minneapolis district’s graduation has been rising, steadily and quite a bit.

Using the simple method that I described above — where only students who have either graduated on time or dropped out are considered — here is the record of the graduation rate of Minneapolis’ public high schools over the past eight years: 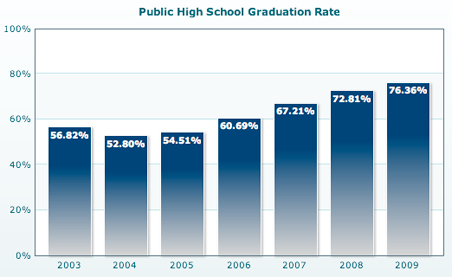 Emmer is implying that nothing very positive can happen in public education until the power of the teachers’ union is broken. DFL nominee Mark Dayton is asserting — and this fact did check out — that funding for public schools has declined (on a per pupil, inflation-adjusted basis) over the past eight years. (That’s why Emmer’s quote at the top of this post starts out “the issue is not dollars.”)

Acknowledging that Minneapolis is only one district (although one of the biggest, and one that faces among the most difficult challenges), the graduation rate of Minneapolis Public Schools has risen every year for five straight years.

Seems to me this is something we should be celebrating. Sometimes it’s kinda hard for good news to break through.