If there was room, I would headline this post: “Everything I needed to know I learned in kindergarten but I forgot it when I went into politics.”

And it’s not about Michele Bachmann, at least not really or not only, although it is inspired by one of her recent misstatements. My plan is to risk being willfully naïve and raise a question that has often occurred to me covering politics namely, why don’t we hold elected officials and candidates to a standard of truthfulness and integrity that we would hope to meet ourselves, teach to our kids and demand from those whom we are thinking about trusting?

At the Values Voters Summit two weeks ago, Bachmann said that “Speaker Pelosi… has been busy sticking the taxpayer for a $100,000 bar tab for alcohol on the military jets that she is flying.”

Of several arguable or questionable things she said, this one had a factier quality, so it got the fact-checkers going and it turned out to be a whopper. Politifact, the Pulitzer-winning fact-checking organization, gave the statement its lowest rating, “Pants on Fire,” which is somehow reserved for statements that are falser than “false.” (“False” is the second worst rating on Politifact’s scale).

Read the Politifact piece if you want the full details, but Pelosi doesn’t drink alcohol and although some alcoholic beverages were purchased for someone on some of the many overseas flights taken by the speaker on official business, the documentable “bar bill” was “$560.28, purchased at what appears to have been a no-frills base exchange at Maryland’s Bolling Air Force Base near Washington, D.C.

Neither Bachmann’s congressional office nor her campaign returned calls to Politifact when they were looking into the accuracy of the statement, nor to me nor to MinnPost D.C. guy Derek Wallbank.

But back to the kindergarten bit. My own query (submitted by e-mail to her campaign spokester who has not responded in two weeks) was specifically to ask whether Bachmann had retracted the statement and/or apologized to Pelosi for maligning her.

As a journalist, I was taught then when I make a factual error, correct it. As a kid, my mom and my kindergarten teacher taught me that if I say something both false and hurtful to someone else, to take it back and say I’m sorry. I guess this is the willfully naïve bit, but I wonder why we don’t hold those who or seek great power through public office to that simple kindergarten standard.

I called Bill Adair, editor of Politifact, and ask him how often, in his fairly extensive experience with these cases, has a public official, when confronted with evidence that something they said was false, retracted and apologized.

Yes, he laughed. At first, I assumed he was going to tell me a funny story along those lines. Then I realized he laughed because he assumed my question was a joke.

He’s had very little experience with the “retract and apologize.” OK none.

“I’ve never seen that happen,” Adair said, at least not in response to a Politifact factcheck..

Sometimes, when the official or candidate or their spokester is presented with evidence that they have been circulating a falsehood or a pernicious half-truth, they will tell Politifact, “OK, we’ll stop saying it.” In a couple of instances involving the 2008 Obama campaign, the campaign would revise the details of the questionable statement they had been making to reflect what Politifact had found. 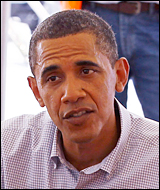 (Example: President Obama was regularly claiming that gas prices were at their highest level ever. Confronted with the evidence that, on an inflation-adjusted basis, it had been higher in other periods, Obama changed the reference to say that gas prices were among the highest they had ever been.)

Just the other day, Adair said, after being fact-checked on a statement that a campaign had on its website, the campaign revised the website. But that’s still different from doing what my mom would’ve made me do, which is to state clearly that I had been saying something untrue and that I apologized for any damage I had done.

Adair’s reaction (I think he may have feared that the laughter hurt my feelings): “You can dream for that, Eric. But I’m surprised enough when they just admit to us that they made a mistake and stop repeating it. (Adair estimated that occurs in about 5 to 10 percent of cases.)

How a campaign pro sees it
I also spoke to an experienced Republican campaign tactician, whom I promised not to identify in order to get a candid explanation of what goes on inside a campaign in case like these. He was very pragmatic.

Some candidates (he acknowledged that Bachmann seemed to be in this category) seem to be gaffe prone, in part because they will casually repeat something they have heard without checking them out. This isn’t good, but in most cases, the staff would not recommend a retraction or apology, for fear it would only call more attention to the matter, which would otherwise pass as an obscure, momentary embarrassment.

In my Bachmann example, he said, the staff’s attitude would be that the difference between what Bachmann said and what Politifact wrote was “so nuanced,” and that 98 percent of the audience the campaign cares about (the voters of the district) don’t know that Bachmann ever said it or that Politifact ever wrote about it.

It would be more serious if the inaccuracy occurred in a TV ad, but the campaign goes to considerable trouble to make those scripts at least defensible.

The most serious cases are not usually just misstatements but one in which the candidate has been caught in a huge embarrassment, where he was unfaithful to his wife or embezzled funds or violated campaign laws or perhaps got caught in a big untruth about his own biography. (Seems like a couple of candidates this year already have been caught claiming falsely to have been Vietnam vets.) In those, the campaign team may recommend a big apology session where the candidate will answer every media inquiry in hopes of putting an end to the embarrassment.

That all makes sense, if you are thinking pragmatically. In a sense, the pragmatic approach starts from the assumption that voters don’t really care that much about being deceived. This makes no sense, but it does have the ring of truth and, if it is true, we the electorate bear substantial responsibility for creating a culture in which politicians feel able to play fast and loose with the facts.

I had pretty much drafted this post yesterday when I took a break to finish reading the newspaper and found that John Helgerson of Victoria was thinking along the same lines and put it better than I could.

In a letter to the editor headlined “What kind of Message do campaigns send to kids?” Helgerson wrote:

“Nearly all candidates and their advocates conduct political campaigns laced with wildly distorted false claims, accusations not based on facts, impossible promises and, sometimes, outright lies. Is this the standard our youths ought to follow and emulate?

“After all, we preach to our kids that they should always tell the truth, not cheat in school, treat others with respect and avoid all manner of questionable behavior. How do candidates reconcile doing whatever it takes to get elected, even when that involves bending the truth, lambasting opponents with false accusations and essentially resorting to trickery? Furthermore, how can we trust people who forfeit integrity in order to win an election?”

Why don’t politicians apologize when caught telling a whopper?