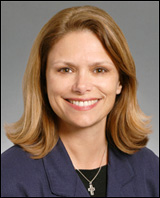 Tarryl Clark’s ad attacking Michele Bachmann for wanting to “wean everybody off” of Social Security has now been fact-checked by KSTP’s Tom Hauser, who gave it an F, and by WCCO’s Pat Kessler, who doesn’t assign simplistic grades but who rated the ad’s main claim an “exaggeration.”

Me, I don’t see how Hauser gives an F to an ad that doesn’t contain a factual statement that is explicitly false.  I’m with Kessler. The ad is not honest and seems designed to make you think (without saying so directly) at least one thing about Bachmann’s current position on Social Security that isn’t true. Bachmann has never suggested that seniors already receiving Social Security should be cut off, nor even that their benefits be cut.

And Clark’s own position on Social Security, which is to do nothing because the latest trustees report projects that SocSec can pay all promised benefits until 2037, is short-sighted and simplistic, since it ignores the impact of the drawdown of the SocSec Trust Fund. Clark says economic growth and job creation are the best things the government can do to help Social Security. In my view, tax hikes and/or benefit cuts, however disguised, will be necessary. U.S. life expectancy keeps rising, which is a good thing, but a threat to SocSec’s balance sheet. When the program was created, life expectancy was 65.

On the other hand, Bachmann has said a lot of false, contradictory and bizarre things about Social Security. Certainly the Clark ad was not wrong to imply that those who want to preserve SocSec in its traditional form have plenty to fear from Bachmannism (which, one might say, is the real message of Clark’s ad). But — as in so many issue areas — Bachmann won’t level about what she supports for Social Security (hint: it’s privatization), won’t retract the inaccurate things she has said about Social Security and won’t respond to simple requests from journalists for her position on the issue.

Bachmann hopes to get away with saying in front of righty groups, on Fox News or in front of her base supporters things like:

But, when speaking to a wider public audience or to groups that value Social Security in its traditional form, Bachmann tends to say that she just wants the big senior entitlement programs fixed.

Privatization and the big Bachmann whopper
In truth, Bachmann favors the privatization or at least partial privatization of Social Security. She was very clear about that in 2006, and she ran as an advocate of the plan that President Bush was promoting at that time.

The basic idea was to allow younger workers the option of diverting a portion of their future Social Security taxes into a private investment account, which could be invested in stocks and bonds (or maybe limit the options to a small range of conservative mutual funds). In exchange, the younger workers would give up a portion of the fixed lifetime benefit that is promised by the Social Security formula, but they would own the mutual fund shares instead, draw on them in retirement or leave them to their kids. 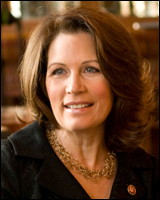 (Unlike many liberals, I personally am not unalterably opposed to all such ideas, but I don’t see how they can be introduced without trillions of dollars in transition costs to keep the old system going until the new version is ready to take over.)

This idea, with various differences of detail, has been on the table for decades and was always called Social Security “privatization.” The Cato Institute, which provided much of the intellectual muscle behind the idea, publicly called its operation “The Cato Project on Social Security Privatization.”

At some point, the language and spin geniuses who decide such things decided that “privatization” was not the best word for selling the idea. You will now note that Dems throw “privatization” around all the time (it’s not an idea they are selling) and Repubs avoid it, using terms like “individual investment accounts” or ‘Social Security choice” and other focus-group tested word choices.

Bachmann seems to have a particular favorite phrase, which revolves around the word “own,” as in: “Who should own our retirement?” If you listen for it, I predict you’ll hear a version of that phrase from her. But mostly, when away from her base, she avoids even hinting at privatization.

Still, in one of her most brazen falsehoods, Bachmann answered a 2006 AARP questionnaire about whether she favored private accounts thus:

“Whatever reforms we adopt, we must find a way to strengthen and protect Social Security without raising payroll taxes, without reducing benefits, without raising the retirement age, and without privatizing the system.”

In my own practice as a fact-checker, I avoid the use of the world “lie,” because to call something a “lie” you have to see into the intentions of the person making the statement. Many of Bachmann’s erroneous statements seem to stem from a reckless willingness to publicly repeat something that she has heard without checking its accuracy or grasping the details. But it is impossible to believe that her claim to reject privatization is anything less than a willful attempt to deceive.

Such blatant prevarication ought to come with a political price, but apparently not so.

At the time, I highlighted the sleight-of-word in my old Strib blog. Back then, Bachmann would sometimes return my calls and I worked hard to pin her down.

“Congresswoman Michele Bachmann has been clear she does not support ending Social Security.  Michele has stated both Medicare and Social Security need to be fixed.  Under their current conditions these programs can’t be maintained for our future generations because of liberal spending by politicians like President Obama, Nancy Pelosi and Tarryl Clark. Michele remains committed to maintaining benefits for those who are receiving benefits as well as protecting the money future recipients have paid into the system.”

There are two problems with this. First, if one were to take Bachmann’s original “weaning” statement seriously and literally, it would lead to the end of Social Security. Even if you were to grandfather in all the seniors now on SocSec, while “weaning off” everyone else, you would eventually do away with the program when the current grandfathers (and mothers) died off.

I agree that when Rep. Bachmann made her “wean everybody off” remark, she excluded those seniors who are now receiving benefits. But after current beneficiaries die off, and the rest have been weaned off, what would be left of the program?

I never received a reply. Perhaps that doesn’t surprise you. I’m only a MinnPoster now, and the congresswoman and I have developed a contentious history. But Kessler, a notoriously fair reporter from mighty ‘CCO, ended his “Reality Check” piece thus:

“Despite repeated requests, Bachmann would not provide us with her detailed position on Social Security, and there’s nothing about it on her campaign website.”

I feel the need to emphasize that Bachmann is far from alone in creative vagueness about Social Security. Clark, as I mentioned, doesn’t favor any changes to the program. Bachmann’s “change-is-vitally-needed-but_won’t-say-what-change” positions if very common on both sides of the aisle. When the House Repubs released their big Pledge to America program, it included the pledge that republicans “will make the decisions that are necessary to protect our entitlement programs for today’s seniors and future generations.”It didn’t specify anything about the content of those decisions.

House Repub leader John Boehner was asked why not. He said that such decisions would have to be preceded by “an adult conversation” with America about the depth of the problem and the range of solutions. On Fox News, Chris Wallace asked whether Americans weren’t entitled to have that conversation before an election with control of the House at stake. Boehner replied:

“Chris, this is what happens here in Washington. When you start down that path, you just invite all kinds of problems. I know. I’ve been there. I think we need to do this in a more systemic way and have this conversation first. Let’s not get to the potential solutions. Let’s make sure Americans understand how big the problem is. Then we can begin to talk about possible solutions and then work ourselves into those solutions that are doable.”