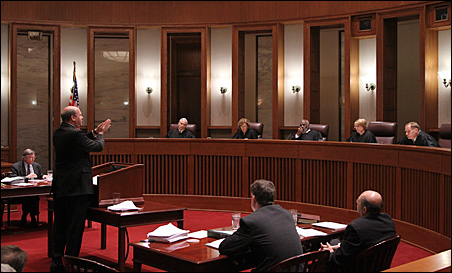 Pool photo by Jeff Wheeler
Dayton lawyer Marc Elias made his case before the Minnesota Supreme Court on Monday.

Teammate Jay Weiner continues to give MinnPost readers great coverage of the guv recount. A few thoughts from the back bench.

Happy Thought No. 1
For those cynics who have trouble believing (I struggle with this myself, even though I should know better, especially after the Franken-Coleman experience) that some judges are able to call them as they see them without following the party line of the party that got them their judgeships, the fact that the Republican-appointee-dominated (and Pawlenty-appointee-dominated) Minnesota Supreme Court rejected the MNGOP and Team Emmer reconciliation argument and kept the recount on track for an on-time departure should be noted, praised and cited as still more evidence that this is not Florida.

Happy Thought No. 2
Those who assume that every Republican challenge to the process is part of a scheme to extend the Pawlenty term and create an all-Republican lineup for a few weeks in January: I’m not saying you have been proven wrong, but so far you have very little evidence.

The recount process certainly entitles the side that is behind to look for any irregularities that might turn the situation around to their favor. The very technical argument yesterday about whether the vote counts should be reconciled with signatures versus receipts had very little chance of moving the vote tally very far in Emmer’s direction (see the statistical analysis at the bottom of this Pi-Press story), and, judging by their questions from bench, the Supremes seemed underwhelmed by the Repubs’ technical legal argument as well.

But the Repubs’ decision to take the reconciliation argument to the Supreme Court before the meeting of the State Canvassing Board, rather than throwing that argument in as a late monkey wrench, is more consistent with a theory of good faith on the timeline than the reverse.

The real indication of whether the Repubs are following a dilatory strategy will come later.

To really know how ReconciliationGate factors into the issue of stalling, we have to see whether the Supremes rejected Emmer’s petition yesterday on the merits (or lack thereof) of the reconciliation argument, or whether they wanted to keep the Canvassing Board process going but might be open to a fuller discussion of reconciliation later in an election contest. For example, yesterday’s ruling could simply mean that the justices want to let the Canvassing Board (which includes two members of the Supreme Court) rule on reconciliation and then deal with an appeal of that ruling.

Chief Justice Gildea’s terse order of yesterday doesn’t quite close the door to a future reconsideration of the argument based on a fuller record, but there’s not a syllable in it that suggests the court is drawn to the Emmer argument.

The big test of the Repubs’ intentions will come during the third week of December. If everything else stays on track and the Canvassing Board issues a final decision Dec. 14 that Mark Dayton got the most votes and is entitled to an election certificate, Team Emmer will have one week to file an election contest. If that happens, and if such a contest follows the normal process of a trial and perhaps an appeal, there is little chance of a final result by Jan. 3. As I have written previously, if a contest is filed without the Repubs having brought forward credible evidence that they have a chance to overcome Dayton’s lead, they will be playing with political fire.

Happy Thought No. 3
The fact that we are having another major statewide recount so soon after Franken-Coleman is not evidence that Minnesota’s election system is all messed up. So far, the two recounts are worlds apart, mostly because Dayton’s lead is so much bigger than any lead Coleman or Franken ever had in 2008-9.

On the contrary, if Minnesotans can look past the annoyance of two recounts in a row, there is plenty of evidence that Minnesota’s election process is among the best and getting better. After the last recount, which demonstrated that absentee ballots had been scrutinized differently in different counties, improvements were made in the process for accepting and rejecting absentee ballots. As a result, there is little talk of absentee ballots this time. I have little doubt that after this recount concludes, the Legislature will be asked to clean up and clarify the statutory language around reconciliation in time for the next election.

And, when the next big recount comes along, whether in two years or 20, the side that is behind will squint very hard and try to find something wrong with the process in that one, too.