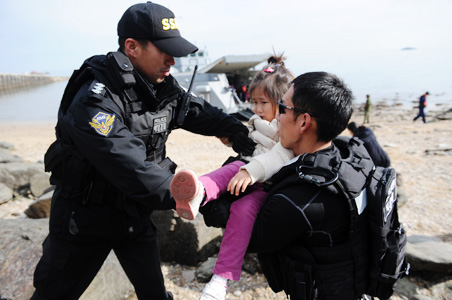 If the world gets into a totally stupid existentially threatening mess, the odds are decent that North Korea’s nuclear weapons capability will set it off. (I’m not predicting this, by the way; just sayin’ the North Korean nukes are definitely on the list of imaginable causes.)

When I think about the North Korean government (quite possibly the most repressive and craziest in the world) starting the latest chapter in the long-running drama called will-a-new-Korean-war-break-out-and-can-the-world-survive, I don’t know whether to laugh, cry or reread my old favorite Kurt Vonnegut novel, “The Sirens of Titan,” which explained the overall purpose of life on Planet Earth.

“The Sirens of Titan” involves (among other things) a war between Earth and Mars, a chrono-synclastic infundibulum (say it out loud; it feels good), and a sect called The Church of God the Utterly Indifferent. In that cult, it is prophesized that in a particular time and place, a weary Space Wanderer would appear, naked and confused, and when asked, “What happened to you?” would reply:

“I was a victim of a series of accidents, as are we all.”

In the book, the prophecy comes true, of course, confirming what we might call the truthiness of the faith.

This next part comes not from a Vonnegut novel, but from the true history of how Korea came to be divided.

The Korean peninsula, a poor, backward place for much of its history, buffeted by the might of its neighbors Russia, China and Japan, had been occupied by Imperial Japan in the late 19th century and officially annexed by Japan in 1910. (The United States secretly agreed not to oppose Japanese control of Korea, in exchange for which Japan agreed not to interfere with U.S. control of the Philippines. Japan didn’t keep its word.)

Japan’s hideous mistreatment of the Korean people took many forms, perhaps most notoriously, the use of Korean women as sex slaves for Japanese soldiers during World War II.

Soviet help
Liberating Korea was not a top-five war goal for the Allied Powers, especially during the early years of the war when the United States and their Soviet allies were focused on defeating Nazi Germany. But as Germany retreated, the Americans hoped for Soviet help in finishing off Japan. At the Yalta Conference (Feb. 1945), Soviet dictator Stalin promised President Franklin D. Roosevelt that Soviet forces would join the war against Japan three months after the end of the war in Europe. Be careful what you wish for.

Germany surrendered on May 7 and the Allies declared victory in Europe on May 8, meaning Stalin was due to join the war against Japan on Aug. 8, and he told his allies he would enter Korea (the northernmost corner of Korea borders Soviet territory) and drive the Japanese out as his first contribution to the joint effort against Japan.

That kind of help was what FDR wanted. But by July, FDR had died and the Americans were starting to think more about the post-war. That included the possibility that the U.S.-Soviet alliance might turn into something less friendly. (It did.) In that scenario, Soviet troops liberating Korea might stay and add it to the Soviet sphere of influence.

Plus, President Harry Truman learned (during the Potsdam Conference, with Stalin at the meeting) of the successful A-bomb test. That changed the calculation of what it might take to finish off Japan. Now it was Stalin who was anxious to get his troops into Korea and the Americans not.

On Aug. 6, the United States dropped the first A-bomb on Hiroshima. On Aug. 9, Stalin declared war on Japan. On Aug. 10, the second A-bomb hit Nagasaki. (The U.S. didn’t have any more bombs ready for use, but the world didn’t know that. On a happier note, no nuclear weapon has been used since that day.)

Back in Washington, the idea was floating that U.S. troops should land in the south, move north, and meet the Russians in the middle.

At the Pentagon, a colonel with the wonderful name of Charles H. (Tick) Bonesteel III (say it out loud; it’s fun) was ordered to propose a line dividing Korea into a northern portion in which the Soviets would accept the surrender of the Japanese occupation force (and presumably run things for a while) and a southern portion in which the United States would accept the Japanese surrender and administer the territory until a more permanent arrangement was worked out.

Drawing the line
This version of the events, which comes down to the short story of why Korea is divided where it is, comes from the U.S. Army’s own Center of American History treatment of the matter:

The Chief of the Policy Section, Col. Charles H. Bonesteel, had 30 minutes in which to dictate Paragraph 1 [proposing a dividing line for Korea] to a secretary, for the Joint Staff Planners and the State-War-Navy Coordinating Committee were impatiently awaiting the result of his work His thoughts, with very slight revision, were incorporated into the final directive.

Bonesteel’s prime consideration was to establish a surrender line as far north as he thought the Soviets would accept. He knew that Russian troops could reach the southern tip of Korea before American troops could arrive. He knew also that the Russians were on the verge of moving into Korea, or were already there. [It turned out, they crossed the border the next day and swarmed quickly down the peninsula.] The nearest American troops to Korea were on Okinawa, 600 miles away. [Bonesteel’s] problem therefore was to compose a surrender arrangement which, while acceptable to the Russians, would at the same time prevent them from seizing all of Korea. If they refused to confine their advance to North Korea, the United States would be unable to stop them.

Here’s the amazing part. Bonesteel had the assignment, but he didn’t have a decent map of Korea that showed, for example, the boundary lines of the Korean provinces, nor even major geographical features like rivers and mountains, that might enable him to work out a rational, relevant line on a map. Bonesteel and his partner on this mission, Lt. Co. Dean Rusk (yes, the Dean Rusk who later became secretary of state and one of the architects of the Vietnam War) found a wall map that showed the entire region but the level of detail was such that all they could tell was that the 38th parallel seemed to cut across roughly the middle of the country. They apparently noted that the Korean capital, Seoul, was south of the parallel, which seemed a good thing since the U.S. was going to occupy the south.

The higher brass in the Pentagon agreed to the Bonesteel-Rusk proposal. The only suspense was whether Stalin would accept it, since everyone from the U.S. side realized they had no way to prevent the Soviets from occupying all of Korea. Surprisingly, and scholars still struggle with why it turned out this way, Stalin not only accepted the 38th parallel as the line, but by the time he did, some of his troops had made it further south and Stalin called them back to the line.

The new dividing line, about 190 miles across the peninsula, sliced across Korea without regard for political boundaries, geographical features, waterways, or paths of commerce. The 38th Parallel cut more than 75 streams and 12 rivers, intersected many high ridges at variant angles, severed 181 small cart roads, 104 country roads, 15 provincial all-weather roads, 8 better-class highways, and 6 north-south rail lines. It was, in fact, an arbitrary separation.

South of the 38th Parallel, the American zone covered 37,000 square miles and held an estimated 21,000,000 persons. North of the line of latitude, the USSR zone totaled 48,000 square miles and had about 9,000,000 people. Of the 20 principal Korean cities, 12 lay within the American zone, including Seoul, the largest, with a population of nearly 2,000,000. The American zone included 6 of Korea’s 13 provinces in their entirety, the major part of 2 more, and a small part of another. The two areas, North and South Korea, complemented each other both agriculturally and industrially. South Korea was mainly a farming area, where fully two-thirds of the inhabitants worked the land. It possessed three times as much irrigated rice land as the northern area, and furnished food for the north. But North Korea furnished the fertilizer for the southern rice fields, and the largest nitrogenous fertilizer plant in the Far East was in Hungnam. Although North Korea also had a high level of agricultural production, it was deficient in some crops. The barrier imposed serious adverse effects on both zones.

It’s important to note that neither Bonesteel, nor Stalin nor anyone else involved in these tumultuous days, had any idea that they were drawing what would turn into a boundary between two separate Korean states and remain so with only minor adjustments for 65 years and counting (leaving aside the major events of the Korean War five years later which wiped out the boundary for a while but ended up with an agreement to put it back where it had been).

If Korea was ever to stumble naked out of this strange dreamscape and be asked: “What happened to you?” It might reply:

“I was a victim of a series of accidents, as are we all.”