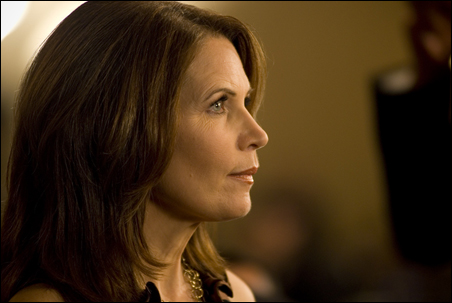 My first hour of the Minnesota Republicans’ Election Night party at the Sheraton Bloomington would have been awfully boring without Michele Bachmann.

But thanks to Bachmann, it started out weird and kept getting weirder.

As I arrived at 8 p.m., Bachmann was up on a riser, finishing an interview with the local Fox News station.  It was noisy and crowded but I believe I heard her enumerate the four messages that voters in the midterm are trying to send to Washington. They were: Extend the tax cuts for everyone; repeal the Obama health-care bill, secure the borders and avoid an energy tax.

Then things got slightly strange, at least visually. While a squadron of camera-wielding news teams hoping for their turn with her stood by helplessly, she stared — was it vacantly or purposefully — at nothing. She was waiting for the earplug in her ear to signal the start of an interview, with the Fox Business Channel.

She stood and stared for about 10 minutes, then gave the interview (I couldn’t hear it), then disappeared in a cloud of handlers. It wasn’t much, newswise, but it was all we had. Then, about half an hour later, the buzz told us that something was happening. Sure enough, Bachmann was back, and back up on the riser, and staring again, with her family and staff buffering her as best they could from a horde of not only journalists but also admirers. The buzz spread, she was about go on NBC and talk to anchor Brian Williams.

On a big screen across the room, the Repubs managed to tune in NBC, and the crowd in the room roared, waiting for Bachmann to appear. Unfortunately, before that segment, up popped Speaker Nancy Pelosi, I suppose finishing an interview that had begun earlier. What the heck, the crowd booed lustily.

Then away went Pelosi and up came Bachmann, live in one corner and also on the big screen. Sadly, I couldn’t hear from either spot. It was very brief. Then, as Bachmann went back into the between interview stare, the news spread through the gaggle that engulfed me – could it be true, Bachmann was holding to go on MSNBC with Chris Matthews.

Yes, it was really true. Bachmann would take an interview with the very guy who got her into so much trouble in 2008 for saying that she suspected Barack Obama and many members of Congress of harboring “anti-American” views and that she absolutely believed they should be investigated. That one nearly cost her her seat, but she survived (and, as since I started writing this, AP has called her race, declaring that she will survive again).

Sure enough, on the big screen across the room, up pops the tow-headed Matthews. (Crowd boos.)

I was dying to hear how this one went (no chance of that) but through the miracle of modern technology I was able to reach a colleague who tuned it in and fed it back to me over my cell. Apparently, Mathews was rude enough to ask Bachmann about the investigations of the anti-American members. She didn’t respond directly to those, and Matthews accused her of seeming “hypnotized.” (And he hadn’t even seen her staring gag.)

But while they were talking, some Bachmann supporters managed to get behind with a big sign that said, “Hey Chris, how’s the tingle going?” That was a reference to a comment Mathews made in 2008, after hearing a Obama speech, that he had a “thrill going up my leg.”

Matthews acknowledged the sign after the interview, and declined to express any embarrassment about his previous statement, which to certain audiences cost him some credibility.

But seriously, in the first two hours of an election night party, when there are hardly any votes counted, can it get any weirder and more entertaining than this.

It’s 10:30. The networks have declared that the Repubs will take control of the House. Congressional candidate Teresa Collett has conceded to Betty McCollum. John Kline and Erik Paulsen have given brief dignified victory statements. Paulsen did a little reprise of the “math guy” theme from his campaign ads:

“When the number of votes you get is more than the other guy, you win and we did.”

But these were calm affairs, overshadowed by the energy in the room when Bachmann finally took the stage, rather than the riser, to thank her supports “for believing in the greatness of the founding principles of this country.”

She herself had withstood “incessant attacks,” Bachmann said, denouncing one unconstitutional action after another by the Dem-controlled Congress and White House that refused to listen to the American people. And finally, today, “the American people have said: ‘Congress, you have to listen to us…’ You voice was heard overwhelmingly.”

With the crowd first chanting “two more years,” then switching to “USA, USA,” Bachmann said she would stand with them any day of the week, rather than stand with “big government” and “the bureaucracy.”

She quoted then from Lincoln, from John Paul Jones (like him, she said, she had “not yet begun to fight”) and from Abigail Adams, whom she identified as “one of our original tea partiers.”