What was the biggest transfer of power to the federal government in U.S. history?

If you think it’s the passage last year of the big health care bill (excuse me, I mean the cramming that bill down the throats of the American people), you’ve been listening to too many hysterics on the radio and TV.

In terms of long-term impact on taxing and spending, or even just in terms of its impact on U.S. health care, the creation of Medicare and Medicaid in the 1960s was much bigger. Of course, the 1930s New Deal, taken as a whole (which would include the creation of the original entitlement program, Social Security) would also be bigger and paved the way so many other new federal powers and federal “intrusions” into the economy that have followed.

But really, the post-Civil War amendments (numbers 13, 14 and 15), which truly were crammed down the throats of the conquered southern states (they had to ratify them to get their representatives back into Congress and to get federal occupation troops off their territory), were bigger still and broke the back of “states’ rights.”

But the biggest transfer of power ever to the U.S. national government is the one Republicans accidentally celebrated last week with the symbolic reading on the House floor. The biggest ever was the drafting (1787) and ratification (1789) of the U.S. Constitution.

Of all the half-truths and untruths that conservative Repubs have been slinging about the Constitution, the biggest is the distortion of the framers, namely the effort to portray them as a bunch of small-government states’ righters.

Those who framed the Constitution and favored its ratification believed that the United States needed a strong federal government. That’s why they are referred to the “federalists.”

As with many complex historical questions, if you are willing to focus only on evidence that suits your purposes and ignore the rest, and if you ignore historical context, you can construct almost any reality you want. Choose to notice this quote, leave out that one, and Abe Lincoln becomes a virulent racist. Put in these facts and avert your eyes from these ugly ones over here, and Benedict Arnold is an American hero.

Before 1789, the structure of the national government, its powers and its relationship to the states and the people was delineated in the Articles of Confederation, which was the real weak-national-government, strong-states, anti-tax system.

Today’s “constitutional conservatives” keep trying to enlist the federalists to lead the charge against federalism. But I daresay the main action in the period during which the Constitution was created is consistent with these statements:

From 1777 (the middle of the Revolutionary War) until 1789, the national government of the United States was called the Articles of Confederation. Under the Articles, the national government had no power to tax. There was no federal judiciary. There was no permanent executive branch such as we would recognize today, just a one-house legislature. Small and large states all had equal power. A supermajority of states was required for important laws to be passed, which made it difficult to pass any national legislation at all.

Congress lacked any power to regulate interstate commerce and really had no power over business activity or the economy more generally. Members of Congress owed their positions directly to the state legislatures, not to the people of the states. Oh, and members of Congress were term-limited.

In short, the U.S. system was a dream-come-true for those who favored (or now favor) a least-government approach and especially those who felt state governments should be strong and the national government weak.

The major players who created the replacement system that we call the Constitution — James Madison, Alexander Hamilton, Ben Franklin (to mention three of the most famous and influential of them) and George Washington (who came out of retirement to chair the Constitutional Convention and lend his enormous Revolutionary War prestige to the effort) — were united by the belief that the kind of great nation they envisioned would require a much stronger national government, one that would, as Washington wrote, have the “energy and dispatch” to oppose the states’ “thirst for power.” 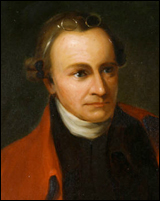 I don’t want to be guilty of the same selective perception of history as I described above. To be sure, in the 1780s there were anti-federalists who favored a weak national government and who opposed the Constitution. The most famous of them was Patrick Henry (“give me liberty or give me death”) who stayed away from the Constitutional Convention, saying he “smelled a rat,” and used his considerable influence to try to prevent Virginia from ratifying the Constitution.

And yes, to be sure, the anti-federalists were neither few nor insignificant. They represented a sturdy fear among Americans in 1787-89 about the dangers of a powerful government, based in a faraway capital. Today’s “constitutional conservatives” would find much in common with this faction.

A lost argument
But Patrick Henry lost that argument in the Virginia ratifying convention, and the anti-federalists lost the overall argument. The campaign for ratification was a close call and federalists (Madison and Hamilton remained very active here, including their anonymous authorship of the famous essays we now call the “Federalist papers,” which sought to reassure nervous states’ righters) used every trick in the book. But they succeeded in cramming their proposed Constitution down the throats of the anti-federalists.

Yes, it’s also true that as part of the compromise between the federalists and the anti-federalists, Madison promised that in the very first Congress he would propose a series of amendments specifying various limits on federal power.

And he kept that promise. And that became what we call the Bill of Rights. And it’s true that Madison and his friend and ally Thomas Jefferson (who wasn’t influential in the framing of the Constitution because he was in France at the time) later became strict constructionists and anti-federalists of a sort.

But at the time of the convention, Madison was one of the chief federalists (so much so that’s he’s considered “the father of the Constitution”).

His greatest disappointment was that he couldn’t convince his fellow framers to create a direct federal power to veto state laws. That should give you an idea of where he was on federal versus state power.

But he did accomplish his main goals: a more powerful national government that could directly tax the population, could regulated interstate commerce, had a more efficient Congress, powerful new executive and judicial branches, and a few elastic clauses that would enable federal power to do what future congresses would deem necessary and proper to carrying out their mission of forming “a more perfect union.”

Yes, it’s true, federal power has continued to grow since 1789, sometimes by amendment (as with the post-Civil War amendments) and sometimes by legislation (like the New Deal programs). There are those who believe that the creation of such programs exceeds the explicitly enumerated powers of the Congress.

As our system has evolved, the chief mechanism for such challenges has been a court case, asking the federal courts to decide whether a particular law violates the Constitution.

And to the degree that the 2010 version of the argument over constitutional limits is about the big health-care bill, there is indeed such a challenge making its way through the courts, probably heading for the Supreme Court. That should settle the question, although, ironically, the power of the Supreme Court to strike down acts of Congress is itself not explicitly enumerated in the Constitution.