The horrors of the last couple of days may have been very good for Tim Pawlenty’s presidential bid. And they were almost certainly terrible for the political future of Pawlenty’s former rival for the 2008 vice presidential novel and potential future 2012 presidential rival, Sarah Palin.

It’s pure good luck for Pawlenty that an already scheduled media blitz, tied to the publication of his campaign autobiography  “Courage to Stand,” put him on a long lineup of TV shows in the aftermath of the Arizona horror.

But the way he has handled the opportunity seems politically brilliant and could — let’s not go overboard here, but could — provide him with a way to stand out from the crowded field of potential candidates for the Repub prez nomination.

He’ll be the calm, reasonable one, the one who waits for things to settle down and waits for the evidence before shooting off his mouth, at a moment when a nation with jangled nerves might consider calmness a new kind of anti-charisma charisma.

Pawlenty, by the way, will be on the “Daily Show with Jon Stewart” tonight. Set your DVRs.

Palin, meanwhile, spent several days in seemingly stunned silence while the nation learned that she had put out a piece of campaign literature last year targeting Rep. Gabrielle Giffords for defeat, and put a symbol on a map of Giffords’ district that looks very much like a target or a view through a gunsight.

Today Palin is out with a weird, rambling, incoherent statement on her facebook page in which she expresses no regrets about anything she has ever done or said but accuses her critics of hitting her with a “blood libel.” (The blood libel, literally, is the claim by anti-semites that Jews murder Christian children because they need their blood to make matzos or for other religious observances.)

Then she made it worse by reading the statement aloud on camera in the most zombie-like performance she has ever given. To her followers, a big part of Palin’s appeal is that she seems sincere, down-to-earth, unscripted. She used to make fun of President Obama for reading too often from a teleprompter. But here she is, reading the weird platitudinous ramble from a teleprompter and doing it badly. (You can even see a reflection in her glasses of what I presume to be the teleprompter, but mostly it’s the deer-in-headlights-reading-words-someone-else-has-written look that undermines her reputation for spontaneity.)

Pawlenty, on the other, ain’t got no teleprompter, glibly faces actual questions live on camera, looks winsomely comfortable, uses self-deprecating humor as he always has, and doesn’t have a record of saying things that sound like death threats. (The best his critics seem to have on hand is a failed joke that Pawlenty made about how conservatives should emulate Tiger Woods’ ex-wife, Elin Nordegren: “We should take a page out of her playbook and take a 9-iron and smash the window out of big government.”)

OK, no one is sure whether Palin is running for president or will ever run for anything again. Views differ. She has followers who will follow her anywhere, but polls suggest that huge majorities would not vote for her for president.

Pawlenty is definitely running. He and Mitt Romney are more clearly committed than any of the dozen or so Repubs who are likely to run. For obscure technical reasons that have to do with campaign finance regulations, Pawlenty won’t give a simple yes, so he gives a convoluted standard response that goes like this (this one comes from his Tuesday interview on CNN’s “Parker Spitzer” show):

“I’m not going to be cute about it. I’m seriously considering running in 2012.”

(In other words, he is being cute about it in the sense that he won’t give a flat straight answer, but he’s not trying to fool anyone.)

Pawlenty should be rated as a mid-range candidate for the nomination. But he has a couple of obvious problems. One, he is less known than Romney, Palin, Mike Huckabee and Newt Gingrich. The book tour is largely about getting the name and face out there.

Two, although his anti-tax, small-government, socially conservative views are consistent with what Repub primary voters want to hear, they don’t distinguish him from the field. Billionaire entrepreneur Romney starts out as the presumptive front-runner among pro-business conservatives. Huckabee and/or Palin would be big with religious/social conservatives. Gingrich is the idea man and the national policy geek. The rest of the field includes several governors who will, like Pawlenty, claim state-based fiscal conservatism. How does Pawlenty break through?

It’s too soon to say how big an event the Giffords shooting will seem by next year. But at the moment, it’s huge, and has morphed into the question of whether right-wing crazy talk can or should be blamed for creating an environment in which mentally unstable individuals will start killing people.

Pawlenty’s been everywhere lately. I caught his act twice Tuesday, once on “The View” (where he offered to make Whoopi Goldberg his running-mate) and on “Parker Spitzer.” He was asked about the shooting and specifically whether hot righty rhetoric, including Palin’s, could be blamed. He said roughly the same thing both times, and he’ll say it again tonight: We don’t know why Jared Loughner did it. Responsible leaders wait for evidence before jumping to such a conclusion. Until evidence suggests there is a link, it is irresponsible to assign blame to anyone other than the shooter. But, in general, the whole country would be better off with less hot, uncivil rhetoric.

Minnesota liberals have a long list of substantive issues for which that they believe Pawlenty must be held accountable. If he gets any traction in the race for prez, the details of his record will become part of the discussion. But now, we’re talking about first impressions.

Last week, the conventional wisdom on Pawlenty was that he was unknown and short on charisma. It’s just possible that a new kind of don’t-shoot-from-the-hip, don’t-go-off-half-cocked (both gun metaphors, by the way) kind of anti-charisma charisma will sell.

From the transcript of Pawlenty on “Parker Spitzer,” here’s the raw feed of Pawlenty hot/cold answer:

PARKER: Let me just ask you about the terrible shooting that took place in Arizona. A lot of liberal groups and some people in the media have put the finger, you know, pointed blame at some of the conservatives… Radio show hosts Sarah Palin specifically. What’s your response to that?

PAWLENTY: It’s one of the things I talked about in the book. And I’m sure Governor Spitzer experienced this when he was in office. When you have a crisis, people tend to react in a knee-jerk way. You’ve got to have good information, otherwise you can’t make good decisions and leaders have to step forward in measured calm, accurate ways and convey what took place and then show a better way forward.

I had that with the bridge. People made false claims about why the bridge fell. It turned out to be something completely different when the NTSB issued their findings.

SPITZER: But don’t you think the rhetoric could be toned down?

PAWLENTY: Well, setting aside this incident, all of us could benefit from a more thoughtful discussion. But we don’t want to chill or deter people’s passion or enthusiasm for their positions. But we need to — look at Ronald Reagan. He was a great example and role model in this regard. Agree or disagree, he had strong views but he treated people thoughtfully and he treated people with decency and civility. And he was strong but he was hopeful and optimistic and positive. 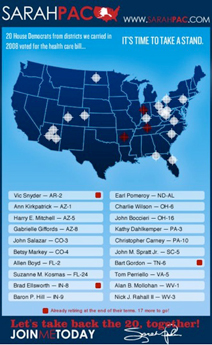 A final note
Lastly, I should note that Palin’s camp says that the symbols on the map graphic showing the districts that were targeted for Repub takeover were not gunsights or targets but surveyor’s marks used to locate precisely a spot on a map. Maybe so.

When Palin released the map, she promoted with a tweet that used one of her then-favorite slogans for conservatives: “Don’t retreat, instead RELOAD.”

Tucson tragedy: What it means for Pawlenty and Palin