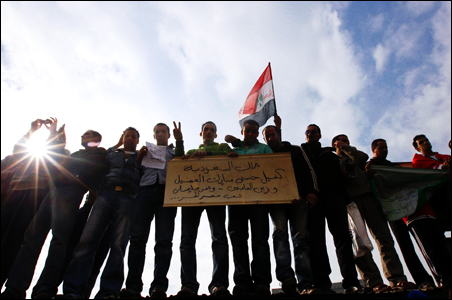 REUTERS/Yannis Behrakis
Protesters wave an Egyptian flag during a demonstration in Tahrir Square in Cairo.

There is a catch, however. Several actually, but one that Egypt has had on the books since 1958 is important: an emergency law that allows for many of these rights to be suspended when circumstances require. For example, when the emergency is invoked, the Egyptian government is temporarily empowered to arrest people without charge, detain prisoners indefinitely, haul prisoners before a special security court in which normal judicial guarantees are suspended and to limit freedom of expression and assembly on the general population.

Here’s the catch to the catch: The emergency law was invoked in 1967 during a genuine national emergency (the run-up to the Six-Day War) and has been in force ever express for a brief period in 1981, which ended when Anwar Sadat was assassinated (another genuine emergency). Nonetheless, that would be 43 years of nearly continuous emergency, which, considering that the Republic was declared 57 years ago, means that Egyptians have hardly ever enjoyed their constitutional rights, at least on paper.

The most recent extension was in May of 2010, which led to a U.S. State Department official announcing, on behalf of the U.S. government, that “We are disappointed.”

Prime Minister Ahmed Nazif told Parliament at the time of that last renewal that new language would ensure that the law would be used against only terrorism and narcotics trafficking.

In addition to providing one more way to illustrate the nature of the Mubarak regime, the “emergency law” gag also serves as a reminder that (a) we are fortunate to live in the United States, (b) that for all its foibles, our constitutional system generally works pretty well, and especially (c) that the importance of a constitutional system has less to do with the actual words in the Constitution than in the commitment that the society shares to respect it. This is among the reasons that I call our Constitution “The Myth that Binds Us.”

At times like this, my mind always goes to the Watergate tapes case. In handing over the tapes, President Nixon surely understood that he was quite likely ensuring that he would have to leave office or be removed by impeachment, perhaps even that he risked prison. So far as we know, no serious consideration was given to defying the Supreme Court.

Nixon was the commander in chief of the armed forces, boss of the FBI, the CIA, the National Security Agency and had been reelected — carrying 49 states no less — two years earlier. He had sought refuge from the requirement of handing over the tape in the doctrine of “executive privilege,” which is part of the mythic Constitution but mentioned nowhere in the text. But the Supreme Court didn’t buy it and Nixon accepted their ruling.

What would Mubarak do?