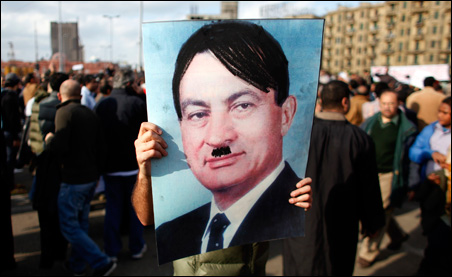 REUTERS/Goran Tomasevic
A man carries a picture depicting Egyptian President Hosni Mubarak as Adolf Hitler during a protest in Cairo on Monday.

It’s not all about us. Yes, the United States has a large stake, given the depth and complexity of its alliance with Egypt. But looking at these incredibly brave, incredibly fed up Egyptians on TV, I’m quite struck with how few of them even mention America and — fortunately, I suppose — how few of them, even though they are talking to American reporters, express the rage they could reasonably feel about the U.S. role in sustaining Hosni Mubarak all these years.

As far as I can tell (and that’s not too far, since the most important communications have happened out of public view), the Obama administration has played its hand very well since the demonstrations started. Much as one might have wished him to, Obama did not immediately throw Mubarak under the bus. That would have been reckless. Washington has other thug allies and they would notice.

But the administration, with one voice, has put its public rhetoric behind several themes: that peaceful demonstrators must not be shot; that the rights of assembly and expression are universal; and that Egypt needs to move toward real democracy, whether that means Mubarak stays or goes.

(Some interviewers get frustrated because they can’t, for example, get Secretary of State Hillary Rodham Clinton to state flatly that Mubarak should step down. But that’s kinda silly. In fact, real democracy means Mubarak goes and everyone knows it. I watched the awkward Joe Biden interview on the “NewsHour with Jim Lehrer” when the veep said he wouldn’t call Mubarak a “dictator.” The outrage over that word choice was fairly silly, and the brunt of Biden’s remarks were pro-demonstrator, pro-democracy and much tougher on Mubarak than anything the last four administrations were willing to say publicly about Mubarak.)

But let’s also get real about about the silly self-myth that the United States runs around the world trying to spread democracy. The current focus on the last 30 years of the U.S.-Mubarak relationship is reason enough to face the obvious fact. The United States has strong alliances with many thugs, dictators, autocrats, monarchs, human rights violators. In many cases it helped put those regimes into power. In others, it saved them when they were in danger, or tried to. The United States has also overthrown or participated in the overthrow of democracies in Central America, South America, Africa, Asia and the Mideast.

The United States propounds values of peace, democracy, non-interference in the affairs of other nations and respect for universal human rights. Every president so propounds.

But when those values come into conflict with what the U.S. government considers the nation’s interests — military, economic, strategic or otherwise — the propounding grows semantic. The interests almost always prevail. And we end up dancing with dictators. 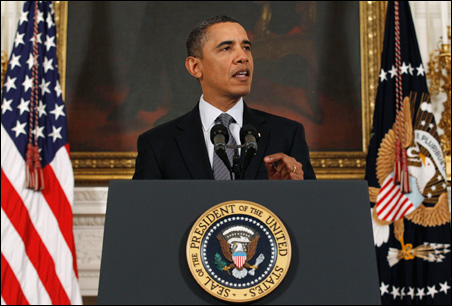 REUTERS/Jim Young
President Barack Obama spoke about the situation in Egypt at the White House on Friday.

President Obama has been in office just two years. He hasn’t started any new wars nor sponsored any CIA coups (that we know about), nor befriended any new dictators that he didn’t inherit from his predecessors. I give points for this.

The Mubarak case is a classic. Rescuing Mubarak might be impossible. Letting him fall is risky. Obama is trying to let him fall and keep alive the possibility of remaining friends with Egypt under new management. So far, he’s doing it in ways that seem consistent with the principles he laid out, ironically, in Cairo, June 4, 2009, speaking explicitly to the Muslim and Arab world. The passage makes good reading just now. Here’s the excerpt:

“The fourth issue that I will address is democracy. (Applause.)

“I know — I know there has been controversy about the promotion of democracy in recent years, and much of this controversy is connected to the war in Iraq. So let me be clear: No system of government can or should be imposed [on] one nation by any other.

“That does not lessen my commitment, however, to governments that reflect the will of the people. Each nation gives life to this principle in its own way, grounded in the traditions of its own people. America does not presume to know what is best for everyone, just as we would not presume to pick the outcome of a peaceful election. But I do have an unyielding belief that all people yearn for certain things:  the ability to speak your mind and have a say in how you are governed; confidence in the rule of law and the equal administration of justice; government that is transparent and doesn’t steal from the people; the freedom to live as you choose. These are not just American ideas; they are human rights. And that is why we will support them everywhere.

“Now, there is no straight line to realize this promise. But this much is clear: Governments that protect these rights are ultimately more stable, successful and secure. Suppressing ideas never succeeds in making them go away. America respects the right of all peaceful and law-abiding voices to be heard around the world, even if we disagree with them. And we will welcome all elected, peaceful governments — provided they govern with respect for all their people.

“This last point is important because there are some who advocate for democracy only when they’re out of power; once in power, they are ruthless in suppressing the rights of others. (Applause.) So no matter where it takes hold, government of the people and by the people sets a single standard for all who would hold power: You must maintain your power through consent, not coercion; you must respect the rights of minorities, and participate with a spirit of tolerance and compromise; you must place the interests of your people and the legitimate workings of the political process above your party. Without these ingredients, elections alone do not make true democracy.”

Obama: “Thank you.” (He then went on to topic 5, religious freedom. The full speech is here.)