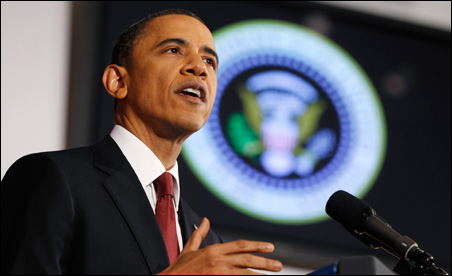 REUTERS/Larry Downing
President Barack Obama spoke about the conflict in Libya at the National Defense University on Monday.

He either said everything or he said nothing — or both, and I’m leaning toward the last.

After the speech, the AP did a fact-check that included this:

“In his pre-presidential book ‘The Audacity of Hope,’ Obama said the U.S. will lack international legitimacy if it intervenes militarily ‘without a well-articulated strategy that the public supports and the world understands.’

“He questioned: ‘Why invade Iraq and not North Korea or Burma? Why intervene in Bosnia and not Darfur?’”

Now he is the decider and the Libya operation is his first decision in favor of a war, a war of choice, his choice.

Is there “a well-articulated strategy that the public supports and the world understands.”

Let’s give a flat, unhedged “no” to that one.

I’ve read the text of the speech several times. Every so often, I think I’m on the verge of getting his explanation, but then … nope.

He said it’s best to act multilaterally. But he’ll act unilaterally if necessary. But not in this case, which is OK because he was able to assemble all the elements of multilateralism. So does that mean that if China or Russia had vetoed the U.N. resolution, he would have allowed Gaddafi to slaughter the population of Benghazi? He didn’t say.

He did say that not to act in this case would have been “a betrayal of who we are.” But on the other hand, “we must always measure our interests against the need for action.”

He mixed our “values” (like, presumably, our preference for democracy and our opposition to oppression) in with our “interests” (which turns out to mean so many things that it means nothing) and said that “when our interests and values are at stake, we have a responsibility to act.” On the other hand, “America cannot use our military wherever repression occurs.”

Right after the speech, I heard Wolf blitzer say on CNN that “I think we just heard what I would call the Obama Doctrine on the use of U.S. military force.” Really, Wolf? If so, here’s the doctrine, as best I can tease it out of the speech:

If there’s a really evil dictator who’s been in power 40 years and has even attacked Americans (although many years ago) and is about to slaughter thousands of his own people when all they have done is seek their universal human rights, and if the potential victims request American aid, and if the U.S. has unique military capabilities to prevent the slaughter and has allies willing to help it, and if the action is sanctioned by a U.N. resolution, then the Obama Doctrine calls for U.S. military action (provided that the U.S. role can be focused on the early days of the action with an opportunity to turn over command of the ongoing operations within a few days).

Otherwise, if some or most or all of those conditions are absent, the Obama Doctrine might lead to a different decision.

I’m starting to feel funny about mocking so unkindly a president who clearly was struggling with his enormous responsibilities in a situation like this. I’m worried that I (like Obama when he wrote the passage cited above from “Audacity of Hope”) have wished for a clear set of criteria that the public supports and the world understands for the use of military power.

And it may be that when you actually have the decider job, about all you can do is to try weigh all the costs and possible costs (many of which you cannot know) of action or inaction, and then weigh the likely benefits (ditto on the knowability of those) and then you decide.