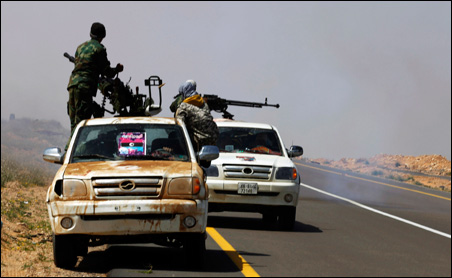 REUTERS/Finbarr O’Reilly
Rebel fighters flee on trucks under fire after they were ambushed by forces loyal to Muammar Gaddafi some 75 miles east of Sirte on Monday.

Josh Muravchik, a charter member of the neocon movement of foreign policy hawks who prominently advocated for the war in Iraq, favors the U.S. military action in Libya, except he would have liked it sooner and more of it. Like many of the neocons, Muravchik is also drumbeating for the overthrow of the Assad government in Syria.

And, as he columnized in the Daily Beast, he fears that President Obama’s “obsession” with multilateralism in the run-up to the Libyan operation has created a “trap” that will make it harder for the United States to overthrow Assad. Wrote Muravchik:

“Seemingly obsessed with negating his predecessor’s unilateralism, Obama has made our humanitarian intervention in Libya the all-time model of multilateralism. First, we waited for the Arab League to invite us to take action. Then we got the U.N. Security Council to authorize that action. And then we insisted that the air war of still-murky goals and parameters be undertaken and commanded by NATO, not by ourselves.

“This is a triumph of diplomacy. And a trap.”

The trap, according to Muravchik, is this: Gaddafi is a nut with no friends, so no one tried very hard to block Obama from getting all the permission slips signed. But having set the bar high for multilateral support, the U.S. will never get U.N., Arab League and NATO support when it comes to Syria.

I found the argument alarming and breathtaking (not in a good way). I hope the Gaddafi era ends — soon and with a minimum of bloodshed. And I would be happy to see Syria democratize. But this neocon enthusiasm for U.S. interventionism gives me the willies. Someone will always be the worst dictator in the world and the neocons will always want the United States to overthrow him (unless he is the king of Saudi Arabia or certain other exceptions).

Big picture
Being the superpower in a one-superpower world doesn’t mean the United States should overthrow the bad-guy-of-the-month. And, in the really big picture, the U.S. needs to worry about giving the impression that we claim the right (because we have the power) to decide who is fit and not fit to rule everywhere in the world and to enforce those decisions with our almost unimaginable military superiority.

In the long run, that kind of attitude is a breeding ground for anti-Americanism around the world. The rest of the world will resent our arrogance and doubt our altruism — and with good reason. 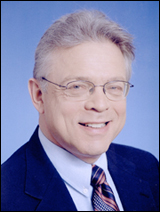 From past Strib days’ conversations with Muravchik, I remembered him as open-minded and intellectually honest and I still had his home number, so I called him over the weekend and asked whether he believes the United States has the right to blunder about the world, overthrowing regimes according to our preferences.

He assured me he does not think that. And that he thinks the United States should act multilaterally to the degree possible.

Those last four words are the rub and have been for a long while. The United States is happy to have allies and international legal authority when it takes these actions, but it is generally unwilling to submit its freedom to start wars or overthrow governments to the necessity of such legal authority.

Even Obama, who (here I agree with Muravchik) seems to attach more weight to international law and legitimacy than most presidents, has never, so far as I know, crossed the line. But — exactly the opposite of Muravchik here — I’m encouraged by the weight Obama attaches to multilateralism and respect for the world opinion.

‘Obama Doctrine’
As Obama addresses us tonight on the Libya situation, I expect he will make much of the multilateral nature of the mission and the international legal authority it gains by the adoption of the U.N. resolution.

Almost every recent president has been assigned a “doctrine” to describe when the United States might use force. Wikipedia lists a bunch of them here. When you read them back to back they start looking pretty silly and transient. And it’s impressive how big a role oil and the Mideast plays in the overall doctrinal sweep.

Colin Powell was never president, but the war-fighting doctrine that is named for him after the Kuwait War seems to be the most-cited of all the recent doctrines. Its list of eight requirements for committing the U.S. military are here, starting with the requirement that a “vital national security interest (VNSI) of the United States” is at risk.

Journalists have had a lot of fun grilling administration officials about the VNSI in Libya. Secretary of Defense Robert Gates has been admirably blunt that there is no VNSI of the United States in Libya, but then he fuzzes a bit. Here’s how he did it yesterday on “Meet the Press“:

Meet the Press Moderator David Gregory: Secretary Gates, is Libya in our vital interest as a country?

Obama will address the nation tonight on Libya. He has a lot of balls to juggle and I can almost guarantee that what he says will displease the necons. I wouldn’t be too surprised if the media, at least, tries to derive the first draft of the Obama Doctrine from what he says.