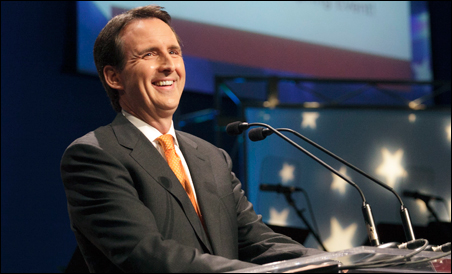 REUTERS/Brian C. Frank
If you even recognize the name Tim Pawlenty you are easily in the upper half of the country in your expertise.

Last week, Tim Pawlenty became the closest thing the Repubs have to a serious and declared candidate for president (although announcing the creation of an exploratory campaign committee is still, technically, a step short of declaring a candidacy, and all of these half-steps are more or less technical and not really all that meaningful outside the world of campaign finance laws).

Pawlenty’s half-step came at the end of a month in which he had been the subject of several high-profile magazine articles, from the right and the left, anointing him as one of the most credible and electable members of the crowded Repub pre-field.

All the pieces, almost ritually, recite the same few points:

None of these analysis points is utter rubbish. All strike me as half-truths verging on three-quarter truths. But seeing Pawlenty, who remains relatively unknown nationally, introduced with such partial truths is a good reminder that there’s always more to the story and – most of the time – we don’t know what’s in the missing portion.

What we think we know
I mean this as a preachment, mostly to myself and to whomever may be open to it, of humility about what we think we know. Our certainty about our conclusions should be moderated by the perpetual likelihood that there is more information out there.

Look at it this way. If you even recognize the name Tim Pawlenty you are easily in the upper half of the country in your expertise. If you know that he is a two-term former governor of Minnesota, you are in the info-elite. If someone tells you (as all of these recent pieces did) that Minnesota is a solid blue state in which the success of a Republican is unusual, you have now started to exceed informed and beginning to be spun, because the story is a little more complicated.

Let’s just focus for a minute on the last of three analysis points above, because it’s the easiest one.

In Ramesh Ponnuru’s National Review homage to TPaw (Headlined “Pawlenty to Like”) it comes across thus:

“He was a successful governor of a deep-blue state — Minnesota last voted for a Republican presidential candidate in 1972 — for two terms.”

Yes, Minnesota has given its electoral votes to the Dem nominee in nine straight presidential elections. And if your goal is simply to give an overly blue impression of our state, that’s the fact you would cite first. On the other hand, before last year, the Dem nominees had lost five consecutive gubernatorial elections. That last fact suggests that a Republican winning the governorship in Minnesota is not a sign of an amazing political talent.

Pawlenty, when he wants to emphasize the crazy-lefty nature of Minnesota politics, usually says that he comes from the state that elected Al Franken to the Senate. (But, of course, the same state elected Norm Coleman to the same seat on the previous round.)

Two victories
The next fact that Minnesotans mostly know but that readers of the various March pieces introducing TPaw to the nation mostly don’t know is that Tim Pawlenty, in his two winning runs, never came close to receiving 50 percent of the vote. (In 2002 it was 43 percent. In 2006 it was 46.7.)

This, of course, is because Minnesota is a three-party state (or more than three – Green Party nominee Ken Pentel received 2.4 percent of the vote in 2002). That’s not Pawlenty’s fault, not at all, but many DFLers believe that the IP and Green Party votes helped Pawlenty assemble his pluralities.

And both of those elections were hit by late shocks that changed the race. In 2002 it was the aftermath of the Wellstone crash. In 2006, everyone close to the race on both sides believes DFLer Mike Hatch would have beaten Pawlenty if he had kept his temper out of sight for a few more days. And if Hatch had managed to do so, we would not be citing Pawlenty’s 2-0 record in statewide races in blue Minnesota.

I could go on. Probably you could too. The point is not to deny or dispute Pawlenty’s political success in Minnesota. 2-0 is 2-0. Nor do I really doubt that a Pawlenty-Haley Barbour ticket would potentially put more purple states into play in 2012 than would a Barbour-Pawlenty ticket.

And the same is true of the basic claims about TPaw’s record as governor. He certainly was anti-tax. He vetoed all the taxes that came to his desk (except for the one that he signed). He did restrain the growth of state government during his tenure, compared with what would have occurred under a DFL governor (although the statistic that TPaw likes to use to illustrate this is exaggerated and misleading).

It’s just that there’s always more to the story.