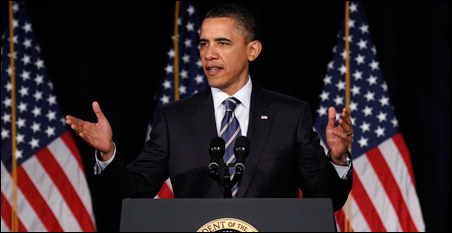 It lacked drama, humor, human interest and poetry, but the prose of President Obama’s big Wednesday deficit/debt speech was one of the best and most important of his term.

We have a choice to make about the national debt and Obama laid it out fairly clearly. And then he didn’t ask congressional Dems and Repubs to sort through the choices and split their differences. He put his thumb clearly and heavily on the scale.

Over much of his term so far, liberals have complained that Obama was too reluctant to stake out a position and fight for it, or even argue for it. His former liberal base has felt that too often he caved in to Republican negotiating tactics. Republicans seem to be clearer about what they are for, and more specifically what they are against (namely tax increases on wealthy Americans). And once Repubs announce what is not gonna happen, they seem to know how to keep it from happening.

On Wednesday, in an eerily quiet auditorium at George Washington University, before an invited audience that only once in 43 minutes interrupted his remarks with applause, Obama staked out a position, argued for it, and sounded ready to fight for it.

In fact, he gave Republicans a taste of their own medicine. He told them what is not gonna happen as long as he is president. And, knowing that he would be accused of class warfare, he talked about the rich and the poor anyway:

“In the last decade, the average income of the bottom 90 percent of all working Americans actually declined. Meanwhile, the top 1 percent saw their income rise by an average of more than a quarter of a million dollars each. That’s who needs to pay less taxes?

And later, referring to the Bush tax cuts on in those with incomes above $250,000, which Obama agreed last year to extend but which are now set to expire at the end of 2012:

“We cannot afford $1 trillion worth of tax cuts for every millionaire and billionaire in our society. We can’t afford it. And I refuse to renew them again.”

Two choices
Yes, Obama gave voice to his inner liberal. But, as is his recent wont, he tried to set up a spectrum on which his own position is in the middle. Here’s how he framed the choice:

Choice 1: We could do nothing, in the name of Keynesianism, and there are very smart economists who think it’s too soon to start cutting back on the borrow-and-spend stimulus. There are recent polls suggesting that Americans aren’t as worried about the deficit as they are about unemployment or even danger of inflation. Obama rejected the head-in-sand approach. (I’ve always kinda liked Tim Pawlenty’s line about how you can’t repeal the fiscal laws of gravity but Obama went for a more boring schoolmarmish explanation of how much interest we will have to pay to bondholders in China and elsewhere if we don’t cut down on the borrowing.)

Choice 2: That would be the Republican approach, which is to rule out any tax increases, continue to press for still more tax cuts for businesses and the wealthiest individuals in the name of job creation, and cut — in the name of deficit reduction but also, clearly, to make room for the next round of tax cuts — whatever must be cut from Medicare, Medicaid and most other social spending programs that help the middle and lower classes.

One of the coolest things about Obama’s speech is that he didn’t ignore the House Republican plan authored by Budget Chair Paul Ryan. With Ryan sitting in the audience, he went after the Ryan plan. He described it. (Ryan considers the description unfair and inaccurate. I’ll leave that to more neutral arbiters, but I feel confident that whatever unfairness or inaccuracy crept into Obama’s version of Ryan’s version of how to tackle the fiscal future it pales by comparison to the lies and quarter-truths some Republicans routinely tell about Obama’s record, most especially about the health care bill.)

Perhaps because Ryan was sitting right there, perhaps because Obama seems so drawn to that rarefied air above the fray, the prez dropped the word “radical” from his prepared text. I’ll say it was a good choice (while noting again that many high-ranking Repubs are not so cautious about word choices when describing Obama’s record).

But Obama did call the Ryan plan “pessimistic” because it suggests that “we can’t afford the America that I believe in and I think you believe in.” He did say Ryan’s “roadmap” would “end Medicare as we know it” by turning it from a guarantee to “a voucher program that leaves seniors at the mercy of the insurance industry, with a shrinking benefit to pay for rising costs.”

Hiding slightly behind a quote from former Reagan budget director David Stockman, Obama did say, of Ryan’s roadmap, that “there’s nothing ‘serious’ or ‘courageous’ about this plan. There’s nothing serious about a plan that claims to reduce the deficit by spending a trillion dollars on tax cuts for millionaires and billionaires. And I don’t think there’s anything courageous about asking for sacrifice from those who can least afford it and don’t have any clout on Capitol Hill. That’s not a vision of the America I know.”

The third choice
Then, of course, there was the third choice, the goldilocks neither-too-hot-nor-too-cold approach, the Obama choice, which he euphemistically called a “balanced” approach. In this case, that’s code for “it has some tax increases in it,” although Obama won’t put the words “tax” next to the word “increase” or “hike” or “raise.” He prefers to calls his revenue enhancements spending cuts, as in: “The fourth step in our approach is to reduce spending in the tax code, so-called tax expenditures.”

But I don’t care. He’s not fooling anyone nor seriously trying to. The main point is that Obama has decided to stand and fight on the need to get more tax dollars from rich people and corporations, and he is prepared to say that the only alternative to that idea is to let the deficit devour the future or to take health care away from the poor and the elderly. He’s basically right about that and is willing to make 2012 a referendum on it. And if he can’t win that argument, God bless us Tiny Tim.

The full text of the speech is here.

The video is here.

And, in the interest of brevity, I’ll save a post about the official Repub reaction for later today.