Three things about the shutdown scenarios and the constitutional problem.

Thing one: Monday’s filing by Attorney General Lori Swanson’s office took into court the issue of what will happen to “core functions” of state government on July 1 if the budget impasse hasn’t been broken, although it provided no details on what would close and what would stay open.

Thing two: The filing also didn’t shed much new light on the constitutional problem that I highlighted two weeks ago. But that argument will be before the courts too, raised by a non-profit conservative group and possibly also by some legislators, according to the attorney who is working on that side of the case.

Thing three: Gov. Mark Dayton expects to make public on Wednesday his shutdown-plan legal filing, but it’s too soon to say whether he will be seeking a “hard” or a “soft” shutdown and/or how he will treat the constitutional issue.

The constitutional problem to which I allude is this: Article XI, Section 1 of the Minnesota Constitution, rather clearly:

“No money shall be paid out of the treasury of this state except in pursuance of an appropriation by law.”

No budget deal by July 1 means no appropriations on the books for anything other than agriculture (for some reason, that bill was passed and signed, while all other appropriation bills were vetoed). So if Article XI, Section 1 means what it says, the state can’t spend any money.

Back to thing one
The Swanson filing closely follows the pattern set in 2005, when her boss and mentor Mike Hatch was attorney general. On June 15, 2005, Hatch petitioned the Ramsey County District Court to rule that the core functions of the executive branch must be performed even if then-DFL-controlled state Senate and then-Repub Gov. Tim Pawlenty couldn’t work out a budget deal by the constitutional deadline of July. 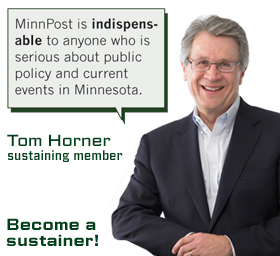 Like Hatch in 2005, Swanson’s brief relied on three arguments to get around Article XI, Section 1, specifically:

• That Minnesotans have state and federal constitutional rights that cannot be guaranteed if the state can’t spend any money. For example, no money means no way to operate the state prisons properly. But the U.S. Constitution forbids “cruel and unusual punishments (like locking prisoners in their cells and not feeding them).

• That the “Supremacy Clause” of the U.S. Constitution means that the state can’t suddenly stop participating in various joint state/federal programs. (Medicaid would be a large example, which operates with a lot of federal and state money mixed together).

Swanson expanded slightly on the Hatch 2005 brief. For example, the AG brief invokes the principle that in interpreting the Constitution, it should be presumed that the framers of the Minnesota Constitution did “not intend a result that is absurd, impossible of execution or unreasonable.” In assigning the power of the purse to the Legislature (as all American constitutions do), the framers “undoubtedly never envisioned that would or could prevent the Executive Branch from carrying out its constitutional responsibilities.”

Monday’s AG brief also went further than Hatch went in 2005 in spelling out the parade of horrible that would ensue if the state could literally not spend any money in a shutdown scenario.

For example, the brief noted:

There are 1,288 mentally ill patients under state care who would get no care; there are about 9,000 prison inmates who would have to be released because without state spending they could not be incarcerated under conditions that would meet the “no cruel and unusual punishments” standard, plus another 20,000 convicted felons who are out of prison but under various forms of supervised release, who would no longer be supervised. The 616 sex offenders who are civilly committed because they are deemed highly likely to reoffend would have to be released. The 754 residents of the state homes for military veterans would be abandoned. The Minnesota Department of Transportation would be unable to respond to highway emergencies. An estimated 600,000 Minnesota seniors, low-income families, pregnant women and small children would lose various benefits that they are now receiving.

It isn’t really a constitutional argument, but it does seem unthinkable that the courts would allow all of those state functions to go unfunded for an indefinite period while Dayton and the Repubs who control the Legislature continued to argue about the right balance of taxes and spending.

Swanson’s brief asked that the court continue the core functions until July 30 to give the political branches an extra month to reach a final deal. State agencies would be ordered to submit a list of their core functions, to be paid for by the commissioner of management and budget under the supervision of a retired judge who would be appointed by the court as a “special master.” This is generally what happened during the two-week shutdown of July 2005.

Back to thing two
In 2005, no one seriously asked the court to take Article XI, Section 1 seriously, at least not until after the budget impasse had been resolved. Later, a group of legislators did ask the courts to rule that the core functions approach violates the Constitution.

But, without deciding the merits, the courts ruled that the argument was no longer timely because the shutdown was over. Minneapolis attorney Erick Kaardal, who handled that lawsuit for a group of legislators that included members of both houses and both parties, vowed that if the same situation arose again, he would make the argument in a timelier fashion.

Yesterday, Kaardal told me that he has one client, the non-profit Minnesota Voters Alliance, which wanted to make the constitutional argument on behalf of taxpayers.

Several of the legislators who were plaintiffs in the 2005 case are still in the Legislature, including such top leaders as Speaker Kurt Zellers and Majority Leader Matt Dean. As of yesterday, Kaardal wasn’t sure which of them might be willing to put their names on a new lawsuit to defend the Legislature’s power over the purse, but he believed he would have some legislative clients and that he would be able to get the argument filed well before the shutdown deadline of July 1.

“The Minnesota Constitution requires the Legislature and the Governor to compromise and pass a balanced budget. The idea that powers should be separated into three branches, and that each branch should serve as a check on the other branches, is fundamental to our system of government. For this reason, article 11, section 1 of the Minnesota Constitution states: ‘No money shall be paid out of the treasury of this state except in pursuance of an appropriation by law.’

“It is the core function of the Legislature and the Governor to jointly enact appropriations into law. These appropriations together make up the state budget. Until the Legislature and the Governor compromise and pass a budget into law, no money, whether ordered by a court or not, should be paid out of the state treasury. For this reason, the petition today asks the court to perform an unconstitutional function.”

When I spoke to him yesterday, Winkler expressed these views but said he was not yet actively pursuing a lawsuit to make that argument in court.

Back to Thing Three
In 2005, even though they were members of opposite parties who were preparing to run against one another for governor, Hatch and Pawlenty took a joint position that the core functions should be funded by the courts. On the day that Hatch filed his brief (making the same three arguments that Swanson made yesterday), Pawlenty filed a similar request and laid out, in a court filing, the particular functions that he wanted to see continue.

Swanson and Dayton, being fellow DFLers, might be expected to collaborate more easily than Pawlenty and Hatch did. But, at least as of yesterday, Dayton had not field a brief agreeing with the core functions arguments, nor had he yet submitted a list of state functions that the court should fund in case of a shutdown.

Two weeks ago, I put up a speculative political/legal analysis of the shutdown scenario in which I said that “the tea leaves, surprisingly, point to the Gov. Mark Dayton/DFL side as the one angling for a ‘hard’ shutdown, if there must be a shutdown.”

Dayton’s expected Wednesday filing will be interesting both as to how hard a shutdown he is advocating and how he treats the constitutional argument.

It’s possible — although no one expects this — that Dayton and the legislative Repubs will strike a deal before the courts can consider any of these questions. But if not, this may be the year the Minnesota courts will decide the meaning of Article XI, Section 1 in a shutdown scenario.