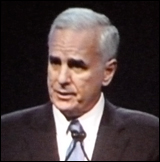 Pardon the breathless quality of the previous post. It was a bulletin based on the release just moments earlier of Gov. Mark Dayton’s court filings this morning in the shutdown case. Starting over, here’s a more thorough and calmer view of the brief.

1. Dayton is taking the Constitutional argument (that I’ve been writing about for the last couple of weeks) seriously.

The Minnesota Constitution (Art. 11, Sec. 1) says no money can be spent from the state treasury without an appropriation.

In the 2005 shutdown, Gov. Tim Pawlenty, Attorney General  Mike Hatch and Ramsey District Judge Gregg Johnson worked their way around that language using a series of arguments, most broadly, that the Legislature could not shut down the core functions of the excutive branch by refusing to fund them. So most of the state government stayed open during the brief 2005 “shutdown.”

Attorney General Lori Swanson, in her Monday brief, employed the same legal arguments and seemed prepared to ask the court to authorize core functions to remain open after July 1, if there is still no state budget. Swanson’s proposal was that each state agency identify what it would need to keep essential services flowing and submit a bill to the commissioner of management and budget. The commissioner would fund the agencies, but the whole arrangement would be under the supervision of a special master, appointed by the courts. She suggested retired Supreme Court Justice James Gilbert for that role.

Dayton’s brief offers a substantially different view. It takes the language about no spending without appropriations, adds in Article III of the state Constitution which says that no branch can exercise the powers of another branch, and without calling much attention to it, tells the court that it lacks any constitutional power to order spending without appropriations. Says the brief:

“The Minnesota Constitution specifically bars any branch of the state government from exercising powers assigned to a different branch. For the court to take over the role of appropriating state funds, it would have to exercise the budgetary powers specifically invested in the Legislature — through its power to appropriate — and, to some degree, in the governor, through his power to veto appropriation bills.”

“With the exception of the judicial department’s inherent power to protect itself from unreasonable and intrusive assertions of authority by other departments… the Minnesota Constitution does not grant to the courts the power of the purse.”

II. Dayton is asking the court to appoint a mediator to help him and the Legislature reach a deal.

The shutdown would be horrible. The continuation of state government spending without appropriations is constitutionally questionable. So the best solution would be a budget deal between the two branches that are supposed to make such a deal — the governor and the Legislature. Says the brief:

But to help make that happen, and to save the court from having to sail into the constitutionally awkward role of approving spending without appropriations, he asks the court to appoint a mediator. He specifically nominates former Justice Gilbert (the same guy whom Swanson has suggested as special master in her brief) or former Chief Justice Kathleen Blatz.

The brief specifies that both of the former justices have agreed to serve if asked. Gilbert, since his retirement from the bench, has run a professional mediation business. As a political matter, it might be worth mentioning that both Blatz and Gilbert had Republican ties in their pre-judicial careers. Both were Arne Carlson appointees.

This could be viewed as politically clever, since Dayton wants the public to view him as the guy who is ready to compromise and to reinforce the opposite view of the Repubs. Presumably the very idea of mediation implies movement toward a middle position, which Dayton must hope would put pressure on the Repubs to get off their not-a-penny-of-new-taxes position.

Dayton has previously suggested that the parties might benefit from mediation and the Repubs have declined. Methinks it will be harder for them to decline if the courts order it.

And the mediation idea might be catnip for the courts. In general, judges love mediated settlements that excuse the courts from having to pick winners and losers, especially in a constitutionally awkward situation like this.

And, just to get in a last bit of I’m-the-reasonable-one positioning, the last paragraph of the Dayton brief’s mediator section reads:

“The Governor commits to be present at the mediation and to devote his full time and attention to reaching an agreement. The Governor wants a balanced compromise, not a government shutdown.”

III. And Dayton is asking that the court do nothing else at this time.

Swanson on Monday asked the court to approve a special master and endorse a continuation-of-core-services program. Today’s brief, written by Dayton’s special counsel David Lillehaug, asks the court to hold off on any such order, theoretically to allow mediation time to work.

But, if the court agrees not to consider a shutdown plan, the next two weeks will put even more pressure on the parties to compromise. They will not have the comfort of a standby plan to keep most state functions going in case they can’t make a deal by July 1, and they will have to consider the possibility that ultimately the courts will agree with Dayton that it can’t intervene to keep the government open.

IV: But if it comes to that, Dayton is suggesting a harder shutdown.

Although Dayton is telling the court that the judges have no power to approve unappropriated spending, his brief argues that he, as governor, does have power to do some spending during a shutdown. But he takes a narrower view of what state functions can continue:

There’s a lot of similarity between these categories and the ones used in 2005 and those cited by Swanson in her Monday brief. Dayton takes a narrower view of them and specifically says that Swanson’s view of what services would continue during a shutdown “exceeds what the Governor considers to be allowed by the Minnesota Constitution.”

One chief difference between the Dayton brief and the Swanson brief is that Dayton rejects the argument — which was used both in 2005 and by Swanson on Monday — that the budget impasse amounts to an unconstitutional effort by the Legislature to shut down the executive branch.

This argument flows from the 1986 case of Mattson v. Kiedrowski. State Treasurer Bob Mattson (back when that was an elected state constitutional office) angered the Legislature by moving to Florida while continuing to collect his salary as state treasurer. The Legislature stripped the treasurer’s office of most of its funding and transferred most of its duties to the Department of Finance. The Supreme Court ruled that this was an unconstitutional attack by the Legislative branch on an elected constitutional office within the executive branch. How can you have a balance of power across branches if one branch can shut the other one down?

In 2005 and again on Monday, the attorney general argued that when the Legislature doesn’t fund the executive branch agencies, it is committing a Mattson-like violation of separation of powers. Dayton’s brief rejects the Mattson argument, thus:

“As of the date of this response, the governor is not yet prepared to conclude that the legislative majority’s use of the power of the purse — by its failure to pass appropriations bills that will be signed or that have the support of two-thirds of each house — has abridged inherent functions of the governor in a fashion akin to Mattson, much less requires the sweeping relief requested by the Attorney General.”

I’m not sure, but I think the big deal here is that what might be considered “core functions” of the executive branch and might be continued during the shutdown under the Mattson language, would not be continued under the Dayton argument. So the functions that would continue would be limited to those necessary to prevent emergencies and those required by the federal Constitution.

The full brief is here. How Dayton believes state agencies and functions should be treated under a shutdown scenario is summarized here.

Dayton asks for a mediator to reach budget deal