Before I forget, I have to pretty much take back the main thrust of the piece I put up early Thursday morning about the Minnesota State Senate brief. The Senate’s legal position is not to call for the shutdown of practically everything. The Senate is not really calling for anything in particular to stay open or closed in case of a shutdown. More on that later. 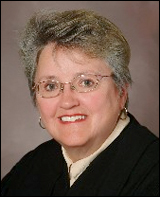 But first, other than the fact that Ramsey District Court Chief Judge Kathleen Gearin rejected Gov. Mark Dayton’s request for court-ordered mediation to resolve the budget impasse, the main takeaway from a long day in court Thursday was that Judge Gearin really, really, really wants to impress on everyone, most especially the guv and the legislators, that this is going to be a hard, tragic, painful shutdown. She also wants everyone to know that, although she may well order some state functions to remain open, it is not the job of the court to indemnify us all against the pain, danger, loss, suffering and inconvenience that will occur in July if the Dayton and the Legislature don’t reach a budget agreement.

She found many ways to express her feeling that that the circumstances have placed her in a horrible dilemma. Here are some of the ways she expressed this feeling Thursday (all of the following are quotes or paraphrases from Gearin):

“We are in a horrible dilemma.”

At the end of the morning session of the court, she told the attorneys representing the governor, the state House and the state Senate to use the lunch hour to contact their clients and tell them to get back to the bargaining table and do something constructive. After lunch they all said they had done so.

Gearin appreciated that but kept hectoring the attorneys to hector their clients. “The people want you to keep talking,” she said, meaning not that the lawyers should keep talking but that the governor and the legislators should. “The clock is ticking” toward the expiration of the current budget, she reminded them.  And Gearin wants to make sure they know that if a shutdown occurs, it will be grim, grisly, gruesome and gross.

She implied — and of course this absolutely not anything you could take to the bank — that she may agree with Attorney General Lori Swanson’s request that the court appoint a special master to oversee some kind of a bare-bones state government, but that if she does the special master will be severely constrained as to which functions can be funded. “If there is a special master,” she warned, “he will have far more restricted boundaries” than the special master of 2005.

“I’m not happy about this,” she said, referring again to the human suffering that a hard shutdown will engender. “But we have to respect our Constitution.”

Lots of people are going to be asking the court or the special master to protect them from various forms of shutdown harm, she warned, but “it is not the court’s role to make everything better. There’s not a legal solution to all of the problems” created by the failure of the other two branches to fulfill their obligation to enact a budget.

Now on to my modified takeback
My early Thursday morning post, headlined  “Minnesota Senate makes the constitutional argument for shutting down pretty much everything,” was based — entirely — on a straightforward reading of the legal papers that Senate Counsel Thomas Bottern filed with Gearin’s court on Wednesday. If you didn’t read it yesterday, you can read it here. It’s brief and seemed clear to me.

It cited three different provisions of the Minnesota Constitution, all of which suggested that the key provision — stating that no money can leave the state treasury except according to an appropriation by the Legislature — means what it says and no one from the other branches of government can usurp the Legislature’s power over the public purse.

The Senate brief went on to state flatly that although the governor has asserted that he has inherent powers to spend money on critical services during a potential shutdown, the Senate does not agree that such powers meet the constitutional requirement for an appropriation before spending state money.

The Senate brief went on to note that the petition by Swanson for a court-appointed special master to oversee judicially supervised spending during a shutdown likewise does not fulfill the constitutional requirement.

In my Thursday post, I said that Bottern’s brief made a strong, simple and radical assertion of what I’ve been calling the constitutional argument.

Apparently, I was wrong or else the Senate changed its position overnight and now claims that the brief says something different. On Thursday, before Gearin and in an interview with me afterward, Bottern said that the Senate takes no position on the governor’s plans for a possible shutdown nor on the governor’s claim that he has inherent powers to engage is certain limited categories of emergency spending. He likewise said that the Senate takes no position on Swanson’s petition for a court-appointed special master and no position on whether the judiciary has the constitutional power to order any spending of funds that have not been appropriated.

When I suggested that Bottern’s previous filing seemed to take positions on those issues, he told me that “a lot of people have read things into the filing that weren’t there.” He said the only reason for the filing was to make the point that the Senate should be part of the conversation and that the Senate reserves the right to take, in future, a position on some of the legal/constitutional issues on which it currently takes no position.

The House, by the way, represented by former Chief Justice Eric Magnuson, also officially takes no position at this time on whether the governor or the judiciary has any constitutional power to spend unappropriated funds.