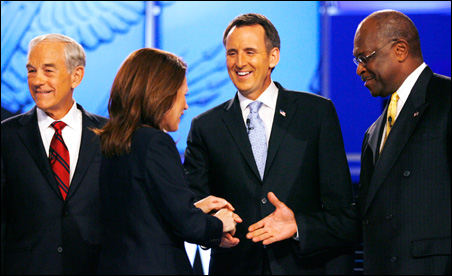 That was the worst presidential debate I’ve ever watched. The format was horrible. The candidates can’t debate any issues because they don’t really disagree on anything, which is testimony to the suffocating power of current Republican orthodoxy. The “This or that?” feature was beyond insipid. And John King, who is quite a solid journalist, was a dreadful moderator.

After announcing that there would be no bells, whistles or flashing lights to keep the candidates’ answers within the absurdly short recommended time limits, King instead decided to just start muttering and clearing his throat into his microphone to hint to the candidates that they should stop talking, a hint that all of them cheerfully ignored. King muttered all night, audibly, but barely. When he wasn’t muttering, King was talking. Although he talks very fast, King sometimes spent 30 seconds asking a question that the candidate was supposed to (but seldom did) answer in 30 seconds.

The punditocracy is pretty close to unanimous about who won (Mitt Romney, because no one attacked him so his front-runnerness was unchanged, Michele Bachmann, because she didn’t act crazy) and who lost (Tim Pawlenty, because he didn’t attack Romney and looked timid when he was invited to do so) and Herman Cain (because he didn’t live up to the hype about what a show-stealer he was). 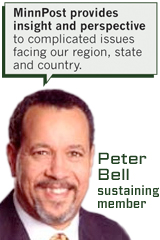 The answer, by almost every one of the seven candidates to almost every question, was pretty much this: President Obama has failed. Everything he has done has been wrong. (Rep. Ron Paul was actually asked whether Obama has done anything right on the economy and he said he couldn’t think of anything. Paul was also one of the pundit-designated losers.)

The solution to almost every problem is for the government to do less, for every tax to be cut or eliminated (former Sen. Rick Santorum wants the capital gains tax cut in half; Cain wants it cut to zero); for federal functions to devolve to the states (Romney even seemed to endorse doing away with federal disaster relief programs for states hit by tornados, floods and such).

Speaking of disasters, CNN tried to humanize the event with a feature called “This or that?” in which the candidate was supposed to make a no-wiggle choice between two pop culture options: Newt Gingrich chose “American Idol” over “Dancing with the Stars.” Cain (who is a former pizza magnate) likes deep-dish over thin crust. Bachmann couldn’t choose between Elvis and Johnny Cash but divulged that she has “Christmas with Elvis” on her Ipod.

So now you know.

A full transcript of the debate is here.

Why the GOP debate was so dreadful