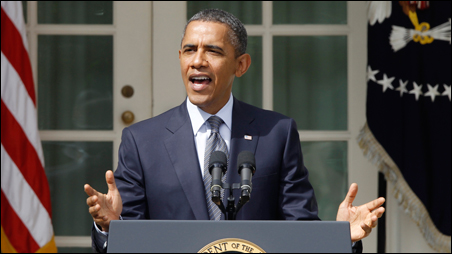 1. For substance freaks, it’s the conclusion of a total proposal that Obama has made in three stages. The total package includes:

The $450 billion “American Jobs Act” that Obama unveiled in his Joint Session of Congress speech of Sept. 8, and Monday he repeated his refrain from that speech: “They should pass it right away.”

Stage Two was revealed the following Monday. It consisted of several ideas for changing tax deductions and the way hedge fund managers are taxed to collect more revenue as an offset for the new spending in the jobs bill. In Washington-speak, we’re supposed to call those provisions his “pay-fors.”

And now, Stage Three, laid out in the Rose Garden yesterday, is another set of spending cuts (in Washington-speak, we’re supposed to call these “reforms”) and tax hikes (also often “reforms”).

The three parts supposedly produce a $3 trillion net decrease in the future size of the national debt. And that’s on top of a $1 trillion debt reduction package that was already adopted at the end of the hideous debt-ceiling crisis negotiations.

2. For deficit hawks, among whom I number myself, it’s important to note that none of this will make the national debt go down. It just won’t go up as fast, and the difference is a total of $4 trillion of debt “reduction.”

Still, notwithstanding various Republican mantras (“cut, cap and balance,” for example, or Michele Bachmann’s “never raise the debt ceiling again”), a plan to reduce the projected growth of the debt by $4 trillion will have to pass as bona fide fiscal conservatism today.

3. For those who cling to notion that the president’s job includes proposing legislation that Congress might actually pass and the job of Congress is to pass bills that the president might actually sign, it’s important to note that yesterday’s “proposal,” even  more so than Stages One and Two, is not a real proposal in the sense that it – or anything like it — has any chance of becoming law, at least during the current Congress.

This is very sad. The next election is more than a year away. The economy is in the toilet. Most of the country now subscribes to some version of deficit/debt hawkery. (In fact, as Andrew Sullivan pointed out moments after the speech, a huge majority of Americans favor a big plan that would include tax hikes on the wealthy to tackle the deficit.)

I still like Tim Pawlenty’s phrase that the laws of fiscal gravity cannot be repealed indefinitely. But the partisan political paralysis is such that nothing can be done to stimulate spending nor to reduce the deficit for more than a year. It’s pitiful.

I want to explicitly repudiate the old journalistically-safe notion that both sides are equally to blame for this situation. I don’t think so. I blame the current Republican Party for changing the concept of compromise to something that means roughly the opposite of what it used to mean, and of adopting a policy of rule or ruin. It appears to have worked, if you measure success on the ruination side by Obama’s current approval ratings.

4. For political-horserace lovers, it’s important to note that now Obama is adopting a version of the Republican definition of “compromise.” He’s given up on the adult-in-the-room approach, which wasn’t leading to much progress on the things he cared about and was making him look ineffectual. Especially with yesterday’s speech, Obama has shifted into campaign mode. He can’t seriously think that the tax-the-rich proposals he laid out yesterday will pass in this Congress. How much more clearly can the Repubs tell him that they won’t tax the rich and that they have more than enough power in the picture to keep that from happening?

So Obama is laying down the argument that he will use for the next 12 months to ask for a second term and to hope that the public will send more Dems to Congress who would pass a package like this one.

5. For those who are interested in the merits of the argument itself, Obama laid them out yesterday quite clearly, although his phrases also dripped with the political needle and with the pseudoscience of partisan word choices. He said roughly this:

We need to keep trying to do something to stimulate the economy. So pass the jobs bill (right away) and keep hope alive. It would be a lot easier to go all Keynesian if the government wasn’t, at the same time, $14 trillion in debt. The debt issue is serious. Our kids’ futures really are at risk if we don’t address it. There are three ways to address it. Cut spending. Raise taxes. Stimulate the economy.

There are potential negative consequences with all three, but there is no alternative to some combination. I favor fair and reasonable amounts of all three. That’s why I refer to my approach three times in the speech as a “balanced” plan or approach. Also, the focus groups really liked that word “balanced” much better than they liked “tax increases” or “tax hikes,” so I never employed either of those phrases, although you can bet the Republicans will.

Much as the Repubs wish it were otherwise, there is really no cuts-only way to get our fiscal house in order. That kind of approach wouldn’t be “balanced.” We’ll keep trying to squeeze that infamous waste, fraud and abuse out of the spending side, but unfortunately the big spending items — military spending, interest payments on the debt and entitlement programs like Medicaid, Medicare and Social Security – account for the vast majority of the budget.

The Republicans know this but are seldom straight about it. The cuts that would have to occur would fall on many of those least able to absorb them. I’m not willing to go along with that. In fact, just to make clear that I’m not going to cave in to the Republicans, I will explicitly threaten to veto any bill that doesn’t call on wealthy individuals and corporation to pay more taxes. That only fair. It’s so fair that I will use forms of the word “fair” 11 times in this one short speech. That will include six references to “fair share,” meaning what I ask rich people to pay. There will also be one “fairer,” one “fairness,” two “unfairnesses.” Republicans have a hard time when the argument is about fairness.

They prefer to argue about a “freedom,” by which they mean, among other things, the freedom of rich people to pay less than their “fair share” of the tax burden.

OK, enough snideness from me

6. For those with a willingness to face realities, one of the most effective devices Obama has employed in both of his two big speeches is the theme of making unpleasant choices. If the public can face up to this, it will be a big deal. Of course everyone would like to keep all of their government benefits and of course everyone (except, apparently, Obama and Warren Buffett) would like to pay less in taxes. But something has to give.

This passage, if people would focus on it, would be a killer argument (and now this is not my snotty satirical paraphrase, this is from Obama’s speech):

“It comes down to this: We have to prioritize. Both parties agree that we need to reduce the deficit by the same amount — by $4 trillion. So what choices are we going to make to reach that goal?  Either we ask the wealthiest Americans to pay their fair share in taxes, or we’re going to have to ask seniors to pay more for Medicare. We can’t afford to do both.

“Either we gut education and medical research, or we’ve got to reform the tax code so that the most profitable corporations have to give up tax loopholes that other companies don’t get. We can’t afford to do both.

“This is not class warfare. It’s math. The money is going to have to come from someplace. And if we’re not willing to ask those who’ve done extraordinarily well to help America close the deficit and we are trying to reach that same target of $4 trillion, then the logic, the math says everybody else has to do a whole lot more: We’ve got to put the entire burden on the middle class and the poor. We’ve got to scale back on the investments that have always helped our economy grow. We’ve got to settle for second-rate roads and second-rate bridges and second-rate airports, and schools that are crumbling.