It’s hard to say it much more clearly than this bar chart does: 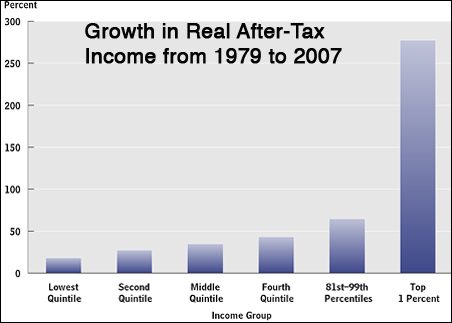 The rich just keep getting richer, especially compared with the unrich.

The Congressional Budget Office is a nonpartisan operation with about as much credibility on matters like this as anyone can have in a world where if someone doesn’t like your conclusions, they will accuse you of bias. CBO decided to assess the changes in income distrubtion in our great nation during the period 1987-2007 because both endpoints occur at times when the U.S. economy was about to suffer a recession.

You should note that all of the data are based on a measure of income after taxes and after the effect of whatever government transfer programs were in place, which were presumably intended to mitigate somewhat the gap between the richness of the rich and the poorness of the poor.

Here are the first few bullet items from the CBO report:

From 1979 to 2007, real (inflation-adjusted) average household income, measured after government transfers and federal taxes, grew by 62 percent. During that period, the evolution of the nation’s economy and the tax and spending policies of the federal government and state and local governments had varying effects on households at different points in the income distribution: Income after transfers and federal taxes (denoted as after-tax income in this study) for households at the higher end of the income scale rose much more rapidly than income for households in the middle and at the lower end of the income scale. In particular:

• For the 1 percent of the population with the highest income, average real after-tax household income grew by 275 percent between 1979 and 2007 (see Summary Figure 1).

• For the 60 percent of the population in the middle of the income scale (the 21st through 80th percentiles), the growth in average real after-tax household income was just under 40 percent.

• For the 20 percent of the population with the lowest income, average real after-tax household income was about 18 percent higher in 2007 than it had been in 1979.

As a result of that uneven income growth, the distribution of after-tax household income in the United States was substantially more unequal in 2007 than in 1979: