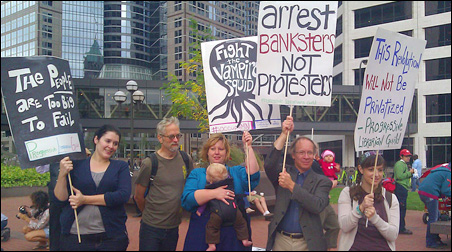 MinnPost photo by Terry Gydesen
“Fight the vampire squid” and other signs from OccupyMN demonstrators.

One of the demonstrators at the OccupyMN protest (protest? happening? event? Sit-in? sleepover?) on Friday carried a small hand-made sign that read “Where is our Ferdinand Pecora?”

Despite being a history nerd myself, I’m embarrassed to confess, Pecora’s name was unfamiliar to me. So I bit, and much to the sign carrier’s delight, I asked him who was Ferdinand Pecora?”

Turns out Pecora  was chief counsel to the Senate Banking Committee in 1933 when the committee held hearings into the role of various big Wall Street institutions as well as some then-prominent multimillionaires in the stock market crash of 1929 and other major events that ushered in the Great Depression. It would never happen nowadays when all publicity generated by Congress must accrue to the benefits of the elected members. But in 1933, Pecora was so relentless in his inquiries that the investigation came to be known as the Pecora commission and Pecora himself was featured on the cover of Time.

“Pecora’s investigation unearthed evidence of irregular practices in the financial markets that benefited the rich at the expense of ordinary investors,” says the Wikipedia article, and the commission’s work help lead to the enactment of the the Glass–Steagall Act, the Securities Act of 1933 and the Securities Exchange Act of 1934.

The protesters (demonstrators? educators?) carried a lot of signs, pretty much every one of them hand-made and while not all of them contained a jumping off point to history lessons or insights into the world of high finance, quite a few actually did.

Another thing the signage mostly had in common with itself was that it reeked of anything but Marketing 101.

Another of my favorites read:

This, the sign-holder told me, referred to a way of trying to hostilely take over a publicly traded company by offering a better price to those who sell early, thus trying to create a stampede of nervous share-sellers who are afraid that that if they don’t take the offer they will be bought out against their will at a lower price. The sign carrier told me he feels that this stratagem is – well — duplicitous at best and, until I hear an argument to the contrary, I’m prepared to go along with him. But the sign is not catchy.

One inscrutable looking young man held a sign that read:

“This is a tribute to the Best sign in the world”

An earth-motherish looking young lady next to him held a sign that read:

I asked the young man whether his sign referred to the young woman’s sign next door. He said not really, although he liked her sign fine. I asked him what was the best sign in the world. He said he wasn’t sure, but his sign was a tribute to it. I asked the young lady who prefers love to money whether she was sitting next to the young man in hopes that people might at least think his sign referred to her sign. She said not really, but she wouldn’t mind if anyone happened to think so.

Some signs and what they mean
A lot of much trickier and more tenacious investigative reporters than your humble ink-stained wretch have failed to unearth the concrete secret agenda that is driving the Occupationist Movement, so during my very pleasant couple of hours wandering among the occupationists (what a fall we’re having, eh?), I contented myself with taking down what their signs said and occasionally asking them about what they meant. Here are some of the signs:

“The winds of change are blowing”

“Blame Reagan and Bush; Not Obama”

“No slaves; No masters”

“Be Warned: The Nature of your oppression is the aesthetic of our anger”

“Corporate Greed is Killing this country and its future”

“Health Care is a Right”

“Corporate America: Join me or face your doom!”

“Money is not Evil; Buying and Selling Congress to protect Wall Street Is”

“Can I please get a bailout to pay for college”

“You’ve Got to change the world and use this chance to be heard; your time is now” (This, the sign holder told me, is a lyric from a song called “Butterflies and Hurricanes” by a group called Muse.)

“We ARE the government”

“Jesus: Please rescue the other 99 sheep”

“If they are saying ‘Let them eat cake,’ maybe we should say ‘Off with their heads.’”

“’The number is negligible and they are stupid’ Dwight D. Eisenhower”

One more lesson
OK, I’ll just squeeze one more history lesson off that last one.

President Eisenhower received a letter from one of his brothers indicating that many conservatives (I gather including the brother) were complaining that Eisenhower’s policies did not represent much of a change from those of the previous administrations. (And bear in mind that Eisenhower, a moderate Republican, came to office after a combined five consecutive terms — longest Dem streak ever, by far — of Democrats Franklin D. Roosevelt and Harry Truman, which terms represented significant expansions in the reach of the federal government and breakthroughs in the growth of the welfare state.)

Eisenhower replied (his brother’s letter and his reply are in the public archives) as follows:

“Now it is true that I believe this country is following a dangerous trend when it permits too great a degree of centralization of governmental functions. I oppose this — in some instances the fight is a rather desperate one. But to attain any success it is quite clear that the Federal government cannot avoid or escape responsibilities which the mass of the people firmly believe should be undertaken by it.

“The political processes of our country are such that if a rule of reason is not applied in this effort, we will lose everything — even to a possible and drastic change in the Constitution. This is what I mean by my constant insistence upon ‘moderation’ in government.

“Should any political party attempt to abolish Social Security, unemployment insurance, and eliminate labor laws and farm programs, you would not hear of that party again in our political history. There is a tiny splinter group, of course, that believes you can do these things. Among them are H. L. Hunt (you possibly know his background), a few other Texas oil millionaires, and an occasional politician or business man from other areas. Their number is negligible and they are stupid.”