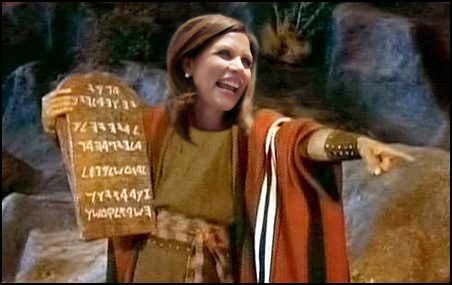 MinnPost photo illustration by Corey Anderson
Rep. Michele Bachmann: “We should not covet what belongs to our neighbor.”

Cuz the Bible tells her so.

Yes, it’s true. I missed it at the time, but Bachmann said recently that Obama’s approach to taxing the rich, or is it Obamacare, or is it — well, pretty much everything — violates not only the Tenth Amendment to the U.S. Constitution (that’s an argument she and other Tenthers have been developing for some years now) but also the Tenth Commandment that God gave to Moses.

OK, I’ll confess. When I first read the 10th Commandment reference in a recent Bachmannian remark, I couldn’t immediately come up with the commandment. On the very slight chance that you find yourself in a similar embarrassment, No. 10 is a commandment against coveting. More fully (it varies a bit from one translation and tradition to another):

And here is how, at an early November appearance at the Family Research Council, Bachmann invoked the Tenth Commandment as a general refutation of Obamaism:

BACHMANN: President Obama believes in cultivating power unto himself and centralizing power unto himself. He’s been willing to engage during his presidency in a massive redistribution of wealth and in the politics of an Occupy Wall Street envy to achieve his purposes. And the president’s economic policies, most notable of which is Obamacare, represent the most ambitious social economic engineering project in the history of the United States. It is in fact a great leap beyond the New Deal and the Great Society. Contrast that with the Tenth Amendment — I’m sorry — the Tenth Commandment, which teaches that we should not covet what belongs to our neighbor. That’s a principle for good government that’s worked historically in the United States.

If we could cross-examine the gentlelady from Minnesota a bit about this, it would be nice to know with more precision all the ways that Obamaism derives from covetousness. But she has already supplied some hints. The reference to Occupy Wall Street envy helps quite a bit. All this talk about the wealthiest 1 percent having too much, with a thinly veiled wished to extract a bit of it via taxes and use it to provide certain kinds of assistance to the less affluent, really, it fairly reeks of covetousness when you look at it right.

The Obamacare reference is a tad confusing, but we can make it work. All those people who lack health insurance look at those who have good insurance, and how do they feel? Well, covetous. When you get right down to it, about 80 or 90 percent of the things that separate the left from the right come down to covetousness.

Now, I can’t tell from the quote whether Bachmann is goofing around when she brings up the Tenth Amendment, then switches to the Tenth Commandment as if it was a slip of the tongue. But it doesn’t really matter because she’s got both barrels loaded with two different kinds of tentherism.

The Founding Fathers and Our Father Who Art in Heaven agree that Obama and his minions have figured out how to be both unconstitutional and unholy on just about everything just about all the time.