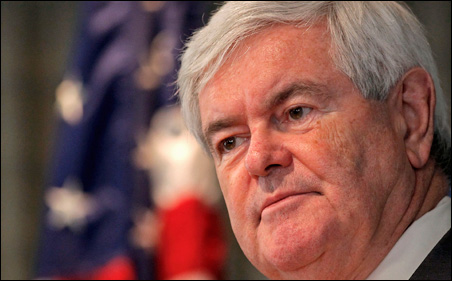 REUTERS/Adam Hunger
Newt Gingrich has been hinting and more than hinting that he favors the privatization of Social Security.

Newt Gingrich wants to convert the traditional Social Security system to a privatized system based on the Chilean model. And he has some so-far inexplicable idea to finance the transition with the $2.7 trillion in the Social Security Trust Fund.

I’ve been asking the Gingrich campaign for several days how he would tap into the trust fund without imposing a significant and almost immediate cut in the benefits of current Social Security recipients. His team hasn’t answered that question, at least not to me, and I doubt there is an answer that doesn’t rely fairly heavily on pixie dust.

I just talked to Michael Tanner of the Cato Institute, one of the long-time guiding lights of the movement to privatize Social Security. I read him the Gingrich quote about the Trust Fund. His reply: “Utterly ridiculous.”

But Gingrich — who has talked about this stuff before, but that was back when no one was paying attention because he was trailing so badly in the polls — is going to make a Social Security speech in New Hampshire today, so maybe he will clear up the mystery or at least be asked about it.

Gingrich has been hinting and more than hinting that he favors the privatization of Social Security (although those who favor it have all but stopped using the word “privatization.”) In his current “21st Century Contract with America” on his campaign website, Gingrich says:

“We must consider a voluntary option for younger Americans to put a portion of their Social Security contributions into personal Social Security savings accounts. Other countries, such as Chile, have found that this model creates vast savings while giving beneficiaries more control over when and how they plan to retire.”

The basic idea
There’s code and smoke there, but the basic idea is to convert Social Security from a pay-as-you-go, guaranteed-benefit system to a system of individual retirement accounts in which workers invest in stocks, bonds and mutual funds during their working lives and use the proceeds of those investments during retirement.

Chile, which Gingrich cites, has such a system. But one big difference is that Chile didn’t have to convert from a pay-as-you-go system. Leaving aside all the arguments about which system is better, one big barrier to the private-accounts idea in the United States is that if young workers start putting money into their own accounts for their future retirements, you won’t have the money flowing into the system to pay current retirees.

Two weeks ago, at a little-noticed one-on-one debate between Gingrich and Herman Cain in Texas, Gingrich solved the problem with a wave of his hand, thus:

Gingrich: “It is a fraud and a lie the way that Congress deals with Social Security. The American people have put money into a trust fund. It is not hidden. It is there. But every politician in Washington wants to find a gimmick to balance the budget off the backs of working Americans.

“If you take it off budget, you could solve Social Security. You take what’s in that fund, and you model it on what’s in Chile, you find with a few modest cuts in spending you get to a stable retirement program.”

This is the statement caused my jaw to drop and that Michael Tanner, who has been advocating for Social Security privatization for decades, labeled as “utterly ridiculous.”

Simply put, any money that the government takes out of the Social Security Trust Fund to finance the transition to individual investment accounts for younger workers would equal a cut in the scheduled or promised Social Security benefits to those already at or near retirement.

If, as Gingrich said in Texas, “you take what’s in that [Social Security Trust] Fund, and you model it on what’s in Chile,” you would be imposing an immediate cut in the benefits paid to those already on Social Security — a cut that would grow over the next 25 years to between 25 percent and 33 percent of the current promised benefits to those already retired who would have no private account.

Unless, of course, Gingrich believes the same money can be given to old people and young people at the same time, which is how it appears.

I hope he will shed further light on this today at his Social Security-themed talk at St. Anselm College.

Reagan-O’Neill deal
There’s a lot more that could be said here if you don’t understand the scheme that Ronald Reagan and Tip O’Neill cooked up in 1983 to extend the solvency of Social Security. They put in place a gradual increase in FICA taxes (worth trillions over the life of the plan), a gradual increase in the age of full retirement benefits (saving trillions in the distant future) and created a couple of decades when FICA would bring in tens of billions every year more than was needed to pay current Social Security benefits.

The “surplus” was to be “saved” for the distant future (which is just now arriving) when current FICA collections would no longer be enough to pay all promised benefits. These “savings” were placed in the Social Security Trust Fund in the form of U.S. government bonds. The current value of those bonds is about $2.7 trillion.

It’s also true, as Gingrich said in Texas, that this plan enabled the non-Social Security parts of the government to conceal a big part of the deficit every year, because it could cover that portion over with money it was borrowing from the Social Security Trust Fund. Understandably, many people saw this owe-money-to-ourselves as a somewhat fraudulent scheme. I agree with Gingrich that borrowing the trust fund and using it to make the deficit and look smaller is deceptive and wrong.

Personally, I don’t see “fraud,” because the whole deal was done in plain public view. But I do see trouble ahead because the general Treasury has no obvious way other than borrowing to get that $2.7 trillion. The plan would look a whole lot better if the government had not in the meantime run the regular debt up over $10 trillion.

Without explaining too much about his thinking, Gingrich takes the position that the trust fund is real, and then he makes his strange leap: It’s real, and we can take it and use it to pay for the transition to a privatized Social Security system.

That might be true if the non-Social Security portion of the government had $2.7 trillion lying around and if it hadn’t already promised to use the $2.7 trillion (that it doesn’t have lying around) to keep paying promised benefits to seniors.

Lastly, even if the whole scheme plays out as it was originally planned and the non-Social Security portion of the government finds or borrows the trillions necessary to redeem the trust fund bonds, the trust fund is currently scheduled to be exhausted in about 2036. At that point — although alarmists often say that Social Security would be bankrupt – the FICA collections would be enough to pay between two-thirds and three-fourths of promised benefits.

I trust that Mr. Gingrich will make all this more clear later today.