The United States maintains a military establishment far far  far in excess of anything that could reasonably be called necessary to defend the country from any real threat to “national security” as that term would be defined by any other more normal country.

The current moment, with the “threat” to cut military spending (unless the Supercommittee can agree on a different way to make a small reduction in the projected future deficit), is producing a steady stream of ludicrous statements. For example, Defense Secretary Leon Panetta calls the threatened sequestration “devastating” and warns that the cuts “will make us unable to protect against a range of threats.”

That’s rubbish. Or at least it’s rubbish if the concept of “threats” to “national security” means to the United States anything like what it has meant to nations throughout history.

These crazy, over-the-top (and yet virtually indisputable) statements come from my reading of one of those books that forces a person to take off the blinders. 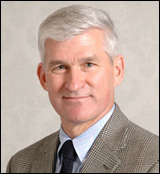 Bacevich, a retired colonel in the U.S. Army now professing on history and international relations at Boston University, traces what he calls (in the book’s very subtitle) “America’s path to permanent war” since the end of World War II. Staying on the path requires us to subscribe to a set of “Washington rules” that stand reality (as far as who is safe and who militarily dominates and threatens whom) on its head so that we can listen without derision to statements like the relatively mild ones from Panetta that I quoted just above.

Much of the book is a historical tracing, from World War II to the present, of the evolution of the Washington Rules (which are rules of how to think and how to talk as much as rules of how to act). But just to lift a few summary statements from the introduction and the first chapter, Bacevich writes that the first component of the Rules is that history has summoned the United States, and the United State alone, “to lead, save, liberate and ultimately transform the world.”

The means of this transformation “emphasize activism over example, hard power over soft, and coercion (often styled ‘negotiating from a position of strength’) over suasion. Above all… the credo obliges the United States to maintain military capabilities staggeringly in excess of those required for self-defense.”

During the Cold War, Bacevich writes, “a people who had long seen standing armies as a threat to liberty, now came to believe that the preservation of liberty required them to lavish resources on the armed forces.”

Our side, of course, won the Cold War but, curiously, “once the Soviet threat disappeared, mere primacy no longer sufficed. With barely a whisper of national debate, unambiguous and perpetual global military supremacy emerged as the essential predicate to global leadership.”

To maintain the consensus behind these rules, “certain views are privileged, while others are declared disreputable.” But “the rules themselves have lost whatever utility they may once have possessed, with their implications becoming increasingly pernicious and their costs increasingly unaffordable.”

One of the dangers of acquiring such overweening military power, Bacevich writes, is that “reliance on military might creates excuses for the United States to avoid serious engagement; Confidence in American arms has made it unnecessary to attend to what others might think or to consider how their aspirations might differ from our own.”

Bacevich identifies what he calls the “catechism of American statecraft,” to which “mainstream Republicans and mainstream Democrats are equally devoted,” which includes these tenets:

1. The world must be organized.

2. Only the United States possesses the capacity to prescribe and enforce such a global order….Leadership, in this sense, implies that Washington demonstrate a voracious appetite for taking on new obligations, never acknowledging that limits exist on how much Americans can afford.

3. America’s writ includes the charge of articulating the principles that should define the international order. Those principles are necessarily American principles, which possess universal validity.

4. Finally, a few rogues and recalcitrants aside, everyone understands and accepts this reality. Despite pro forma grumbling, the world wants the United States to lead.

“When it comes to projecting power, the United States exempts itself from norms with which it expects to comply.” For example, the role of world policeman requires “that the United States should maintain a far-flung network of bases and other arrangements to facilitate intervention abroad emerges as an essential predicate.” 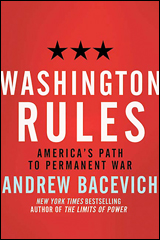 The United States maintains 300,000 troops abroad at 761 sites in 39 foreign countries. Who else could aspire to such an arrangement without being perceived by Washington as an existential threat to world peace?

And, “precisely because American purposes express the collective interests of humankind, Washington expects others to view U.S. military power, the Pentagon’s global footprint, and an American penchant for intervention not as a matter of concern but as a source of comfort and reassurance.”

OK, enough for now. I highly recommend the book (which is out in paperback). And I can’t help but feel that even quoting from it at such length and with such approbation might be enough to get me on a list somewhere for closer watching.

The Washington rules, it seems to me, can remain a consensus only so long as they are not discussed too openly or too clearly and as long as they are drowned out by the usual chorus of alarmism over the threat to our nation and the world if the budgetary crisis should require the United States to close a base or skip a weapons upgrade.

For the book’s motto, Bacevich chose this from “Ash Wednesday” by T.S. Eliot:

“Suffer us not to mock ourselves with falsehood.”

‘Washington Rules’ and our path to permanent war