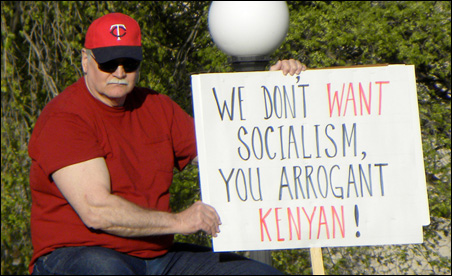 Photo by Fibonacci Blue
A protester attending a 2010 Tea Party rally at the Minnesota State Capitol.

U.S. politics is haunted by race. The possibility that racial prejudice is — or might be — operating on our political thinking never seems very far below the surface. So I was struck by Theda Skocpol’s Nov. 10 presentation at the U of M of her conclusions about the Tea Party in a soon-to-be-published book on the topic.

Skocpol said — based on extensive interviews with Tea Party members and attendance at Tea Party meetings — that Tea Partiers are generally not racists.

At the Skocpol presentation, by chance, I sat next to a newly-arrived U of M political scientist whose current research also investigates the impact of race bias in the thinking of Tea Party sympathizers.. Prof Howard Lavine told me that his research points to the possibility that Skocpol’s they’re-not-racists conclusion is an oversimplification.

Lavine found it utterly believable that the Tea Partiers do not consider themselves racially prejudiced and that those Skocpol interviewed could talk about their views without making racist statements. He also agrees with Skocpol’s they-are-not-racists statement insofar as he considers the term “racist” to be a an overbroad and useless term that does little other than inflame and cut off conversation.

On the other hand, Lavine said, Skocpol’s statement was too strong and ultimately unpersuasive.

“If you just say ‘they’re not racists,’ most people will think you mean that race has nothing to do with it. And that’s just not true.”

“There is consistent and strong evidence of a correlation between racial negativity and Tea Party identification,” Lavine said. “It’s a fairly strong correlation and it’s been demonstrated across a number of independent surveys” and other academic research projects, including Lavine’s current research.

Summarizing all of that research, Lavine said: “On average, people who identify with the Tea Party hold more negative racial beliefs than other Americans, including other conservatives.”

‘White backlash’
The Tea Party movement has become the gathering place for that portion of U.S. conservatism that, back in Nixon days, used to be described as “white backlash,” Lavine said.

Lavine’s recent research is cleverly designed, complicated and potentially controversial. It relies on surveys that did not ask directly about race, but explored racial attitudes via visual cues to survey respondents.

Lavine says you don’t find out about the role race may be playing in someone’s politics by waiting to hear explicitly racist statements. Not only do most people not talk openly about race-related motives, in many cases they are not aware of how their race-feelings affect their political thoughts and actions.

For example, in his current research (some of which was presented at last year’s conference of the Midwest Political Science Association and some of which is on its way to being presented at this year’s Midwest conference) Lavine and his colleagues designed an online survey and got responses from a sample of about 800 citizens, including many who expressed sympathy for the Tea Party and many who did not. The survey asked about programs designed to help people who can’t keep up with their mortgage payments stay in their homes.

(I would remind you that the event that in some sense sparked off the Tea Party movement was an outburst by CNBC correspondent Rick Santelli about the injustice of bailing out those who took out a mortgage to put an extra bathroom in their house and now can’t afford to pay their bills.)

Unsurprisingly, Tea Partiers were more likely to oppose a program to help the struggling mortgagees and to say that the idea of such a program made them angry. Presumably, there are no surprises in any of those results, given the ideology of the Tea Party movement. Race was not mentioned in any of the questions.

At the beginning of the section on the mortgage assistance, a picture was included of a man, presumably a struggling homeowner, and a house with a foreclosure sign in the yard. Half of the sample saw a white man in the yard; half saw a black man. That’s curve No. 1.

The second curve was the way the survey suggested those men came to be standing in their yards next to a foreclosure sign. Half the sample was told: “As we now know, many people took out large loans and mortgages during the housing bubble that they couldn’t afford and they are likely to lose their homes unless the government intercedes.”

The other half was told: “As we now know, the severe economic recession beginning in 2008 led many people to lose their jobs or face reduced hours. They are likely to lose their homes unless the government intercedes.”

At the beginning of the section on the mortgage assistance in the online survey a picture was included of a man and a house with a foreclosure sign in the yard. Half of the sample saw a photo a white man in the yard; half saw a photo of a black man.

What did Lavine and his team find after throwing the two curves?

Among Tea Party respondents who heard the introductory sentence blaming the bad economy for the plight of the underwater mortgage debtors, Tea Party members and sympathizers did not respond differently to questions about the program based on the race of the homeowner in the picture they were shown. They generally didn’t like the programs, but they didn’t dislike them any more or less whether they saw a picture of a white or black homeowner.

But when the respondents heard the introductory sentence that suggested that the underwater homeowners had brought their problems upon themselves by borrowing more than they could afford, a significant disparity showed up based on the race of the picture.

Among the TP sympathizers in the sample, the size of the differential in anger and opposition and blaming of the homeowners based on no factor other a difference in the skin color of the homeowner in the photo was statistically significant, Lavine said. Chances are that the respondents were unaware that they were reacting in any way to the picture. But they were.

On the anger scale (the respondents were asked to rate on a seven-point scale how angry they were that such people might get mortgage assistance) the Tea Partiers who saw a black homeowner in the picture were 15 percent angrier than those who saw a white homeowner. That’s a statistically significant difference.

The question asked in the survey was: “On a scale of 1-7, how much are the individuals in danger of foreclosure to blame for their situation?” A response of 1 means the homeowner is not at all to blame. A response of 7 means the homeowner is almost entirely to blame. The two bars on the left reflect the “blame” score given by all respondents who identified with the Tea Party. The two bars on the right reflect responses from non-Tea Partiers. In each pair, the blue bar reflects the average “blame” score given by respondents who saw a picture of a black man at the beginning of the discussion of distressed homeowners. The red bar reflects the average score of those who saw a white man in the picture.

Deserving-vs.-undeserving
But it is curious that the gap is insignificant among the Tea Party sympathizers who were given the other description of the cause of the problem faced by defaulting homeowners — the version that suggested that the homeowners may have fallen behind on their payments because they were laid off in a bad economy.

Lavine said that political scientists have long explored this deserving-vs.-undeserving theme and its impact on attitudes toward government programs to help the poor. The research — including his survey experiment — has found that attitudes about the deserving and undeserving poor are entangled with racial stereotypes.

Look what happened in his experiment, he said. People were cued by the language to think about the program as one to bail out the undeserving, and they generally didn’t like the idea. But the subgroup that saw a black man’s picture was substantially angrier, more opposed to the assistance and more inclined to assign the blame for the problem to the homeowner himself.

After learning about Lavine’s research, I contacted Prof. Skocpol and told her about my follow-up piece. She confirmed that other surveys have also concluded that Tea Partiers are more likely than other conservatives to hold harsh stereotypes about minorities (although Tea Partiers also have relatively pessimistic views about people of all races).

But her book relied mostly on the interviews she and her co-author conducted, which she said gave the Tea Partiers a chance to explain their beliefs.

“Remember, right-wing media spends a lot of airtime suggesting that minorities got extra help in improper ways,” she wrote me.  “So it might be that sense about how a policy worked — based on slanted, inaccurate media coverage — rather than pure racial animus.”

She added: “’Racism’ is such a global and loaded word, and not appropriate to apply to an entire social protest effort, in my view, unless the evidence is massive and unequivocal, which it certainly is not for Tea Partiers.  I am not sure what is to be gained by going global in such characterizations.”