For most of Minnesota’s history, state budgets have been made the old fashioned way, with appropriations agreed to by the Legislature and the governor. We have had plenty of times when this required a compromise across party lines and when the parties pushed the process to the limit. But it got done and, until recently, the question never seriously arose of what would happen if the two branches that are supposed to do the budgeting couldn’t agree.

But now we have entered the era of no compromise.

In 2005 (with DFLers controlling the Legislature but a Republican governor) they couldn’t find a compromise until after a Ramsey District Court judge agreed – with little in the state Constitution on which to base this new judicial power – to take over as budgeter of last resort. A case challenging the idea that the court had such power made it as far as the Minnesota Court of Appeals, which dismissed the matter because by then a budget deal made it “moot.” The Appeals Court did urge the Legislature to put in place a standby bill, specifying what should be funded in such emergencies. The Legislature didn’t do it. 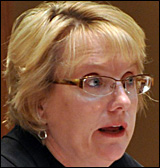 In 2011 (now with a Repub-controlled Legislature and a DFL guv, but the basic philosophical disagreement across party lines still in place), we reached the shutdown point again and, once again, a Ramsey District Judge agreed to step in. A similar legal challenge was filed (by the same attorney, Erick Kaardal, of Minneapolis).

Elements of “judicial modesty” and deference to the other branches makes the courts reluctant to decide a big constitutional question if they can avoid it. And, once again, the budget deal had been settled so the court had the option of punting. But the “mootness” doctrine has some exceptions and one of them suggests that if you have a problem that is likely to keep arising, but keeps disappearing before the court has a chance to decide it, the court has permission to overcome its modesty.

Justice Alan Page, the only dissenter from yesterday’s decision to punt, argued that it is fundamental to the court’s role to “say what the law is.”

Personally, I was sympathetic to this impulse. Not as a matter of legal philosophy, but as a practical matter, if we are going to have these frequent shutdowns or near shutdowns, the whole state should know what the rules are.

But the potential consequences of such a ruling are serious. If — as seems quite likely given the clarity of the Constitutional provisions on appropriations and who is empowered to make them — the Supreme Court were to rule that the judiciary lacks constitutional authority to take over as budgeter of last resort, then the next shutdown crisis would occur on the edge of a cliff. If the executive and legislative branches couldn’t work out a budget or a lights-on bill before the deadline, the state might face a sudden cataclysmic cutoff of even the most truly essential of services.

It’s possible and reasonable and even a bit hopeful to believe that in such a circumstance, the two more political branches would simply understand that failure to compromise is simply not an option. But there are no guarantees in the era of no compromise.

So the court, invoking the doctrine of judicial modesty and respect for the Constitution, has declined, for this round at least, to say what should happen, constitutionally, if the other branches fail to do their job.