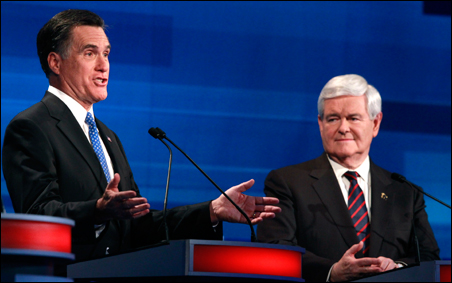 The five remaining Repub candidates debated in South Carolina (and on Fox, cohosted with the Wall Street Journal) last night. I’m impressed with how little attention it’s getting, other than the fact that Mitt Romney made a half-baked non-commitment commitment to release his tax returns in the general vicinity of April. (His non-promise ended with a hilarious last comment of “time will tell.” And one supposes it will.)

Naturally his reluctance to release tax returns whets the opposition appetite to know what he is hiding.

Gingrich
Newt Gingrich got the biggest crowd reactions, especially for going back over his proposal to relax child labor laws so young blacks can get a taste of working and getting paid. Personally, I don’t think it’s the worst idea I’ve heard, but it seems clear that Gingrich uses it as some kind of dog whistle.

In this case, the inchoate dog seems to be the resentment in righty circles against what they perceive as liberals’ perpetual desire to give away government money without requiring any effort from the recipients. “Only the elites despise earning money,” said Gingrich, to roars of approval from the studio audience. Huh?

Gingrich also repeated an incredibly-too-good-to-be-true proposal to keep Social Security going for those who want the current guaranteed benefit (not clear how he pays for it in the future when current projections show the system will not be able to afford full benefits). But for those who are willing to go the private accounts model, he wants to give them a guarantee that if their account doesn’t perform well, the government will make up the difference. Wow. I’ll take that deal.

Gingrich did not repeat his earlier pixie dust plan to finance this with money from the Social Security Trust Fund. He now claims he will make cuts in programs elsewhere in the budget to free up the funds. But he was denounced by Rick Santorum for what Santorum called the “fiscal insanity” of the financing non-financing non-mechanism. Santorum was right.

Santorum
Santorum got in Romney’s face about the attack ads. One ad by the pro-Romney super PAC that has done most of his dirty work criticizes him for supposedly wanting to let felons vote. Santorum supports a restoration of voting rights for felons who have completed their sentences and probation. Romney says that those who commit violent crimes should never get their voting rights back. Santorum says that Massachusetts has a more liberal position on former felon voting and why hadn’t Romney tried to change it when he was governor? Too many Democrats in Massachusetts, Romney explained.

Romney
Romney expressed regret over the ridiculous super PAC phenomenon that enables friends of the candidates to run ads for which the candidate then doesn’t have to take accountability. He says he wants to do away with the new system. In its place, in Romney’s thinking, should be a system allowing wealthy individuals and corporations to give unlimited amounts directly to the candidates.

Paul
Ron Paul had his worst debate ever. His answers about whether he does or doesn’t think the United States was legally/morally justified in killing Osama bin Laden were disastrously meandering and incoherent. He continues to make sense, to me, in suggesting that Americans ought to occasionally ask themselves how we would feel if some other country did to us what we do to other countries. But this crowd wasn’t listening to that. He also caused some consternation by taking the word “defense” seriously, which I appreciated. He was accused of wanting to cut “defense” spending. He said no, he only wants to cut “war” spending. Foreign bases, the wars in Iraq and Afghanistan, the drone flights over Pakistan, and the coming war with Iran are not about “defending” America.

Perry
Rick Perry had his best debate performance by far. But it is too late for him to become relevant to the race? I would guess the answer is yes, but it might be safer to say…