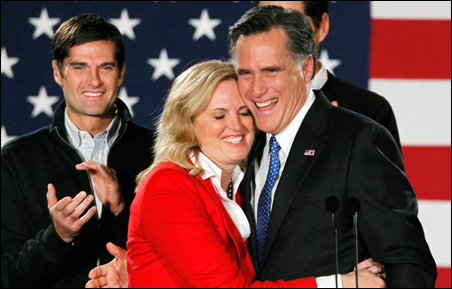 Well that was pretty funny, watching a lead, ranging from under 100 votes to under 10, flip back and forth all night, while CNN and Fox tried to fill the hours with political handicappers dancing on the head of a pin.

The chief controversy was whether to view it as a good or bad showing by Mitt Romney.

The good-for-Romney camp focused on the fact that until a month ago, Romney had planned to concede Iowa to the evangelicals and start his real march to the nomination in New Hampshire. Therefore, coming in late and winning/tying for first place exceeded expectations (at least the expectations Team Romney had intentionally tried to lower by earlier downplaying Iowa).

The bad-for-Romneyites emphasized that Romney’s support continues to bump up against a fairly low ceiling, which emphasizes the lack of enthusiasm that evangelicals and hard-line conservatives have for him. But even the pundits who were deep into Romney badness (I’m thinking of James Carville) expect Romney to end up as the nominee.

Yogi Berra and Neils Bohr make joint appearance
Personally, I’m developing a pretty bad attitude about how much of “reporting/analyzing” is about trying to predict the future. The predictions are almost always wrong, but the predictors seem to suffer no loss of credibility. Yogi Berra supposedly said that “it’s hard to make predictions, especially about the future” (although the provenance of the quote is oft-disputed, and when I just tried to look it up I found a guy arguing that the one who actually said it was the physicist Neils Bohr, although the quote is also oft attributed to Albert Einstein and Mark Twain).

Sorry, lost my train of thought there for a minute. I’ll get back to Iowa in the next paragraph, but I have to mention my favorite Berra-ism. Yogi supposedly said (or was it Twain?): “Always go to other people’s funerals. Otherwise, they won’t go to yours.”

Speaking of funerals (political/presidential funerals) Rick Perry said last night he would reassess before deciding whether to go forward although this morning he is talking as if he is still in. Michele Bachmann surprised the pundits last night by talking as if she was staying in the race but announced this morning that she’s out.

Newt Gingrich, the most recent of the 22 non-Romney frontrunners, is staying in, for now. I watched his remarks to the troops last night and thought he was reasonably gracious, especially considering the TV-ad mugging he had just endured by several of his opponents and their Superpacs. (Keep repeating until you almost start to believe it: The candidates have no control over — and bear no responsibility for — the nastygrams that their best political friends and supporters are airing on their behalf.)

But the official analysts all heard Gingrich saying that he would proceed to New Hampshire only to exact vengeance on Romney.

Ron Paul finished a strong third and will definitely go on. The hot angle on the Paul story seems to be the question of whether he will end up getting on the ballot as the Libertarian nominee (and, if so, whether he might turn into Barack Obama’s new best friend).

The last shall be first?
Anyway, I’ve managed to get this far without mentioning the name that should have been mentioned first.

Rick Santorum’s showing was astonishing, impressive and, although I don’t know of anyone who expects him to become the nominee, has entered Iowa caucus lore. Lots of candidates have come from seemingly nowhere in the polls to make a strong Iowa showing. Just last cycle, Mike Huckabee did it. But he built to it gradually. Santorum went from pretty-much-last to pretty-much-first in about a week.

It is possible, and probably correct, to view Santorum as simply the latest Anybody-But-Romney-Of-The-Week who managed to take his turn at a propitious moment.

I have another theory, based especially on what happened in Iowa in 2004 when the top-polling candidates, Howard Dean and Dick Gephardt, starting attacking each other with TV ads. (They ended up finishing third and fourth behind John Kerry and John Edwards, who ran no attack ads.)

In a big field, when the nastygrams start airing, the person who is neither the attacker nor the attackee tends to benefit. My theory is that this phenomenon benefitted Santorum substantially.

Gingrich was asked on the Laura Ingraham radio show whether he could imagine forming a stop-Romney coalition with Santorum. Somewhat surprisingly, his answer begain with the word “absolutely.” How would they help each other while running against each other? Only thing I could figure is that Gingrich would do the Romney-attacking and hope that Santorum got the benefit.

The next round of polling will tell us, within a few nanoseconds one suspects, whether Santorum will get a substantial “Iowa bounce” and become relevant in New Hampshire. A logical case can be made that most of the former Perry and Bachmann supporters will turn to Santorum (and those two did receive the support of a combined 15 percent of Iowa caucus-goers).

Just to set the baseline, Suffolk University has started a daily tracking poll. Today’s release, obviously based on interviews before last night’s impressive showing by Santorum:

The most notable change from the previous day was movement from Paul and Huntsman to undecided. Hmm.

I’ve become a supporter, in principle, of ranked choice voting. It would have been fascinating to see that system played out last night in Iowa or next week in New Hampshire.