Curiouser and curiouser go the candidates through the super PAC looking glass.

Now both U.S. Senate candidates in Massachusetts say they want “independent” “outside” groups to stay out of their race, let the candidates raise their own funds and air their own TV spots for which they themselves can be held responsible.

So far, sounds kinda familiar. In the presidential race, most of the candidates claim to be upset that their Super PAC allies (to whom they are not allowed to speak directly but instead speak to by announcing publicly what they at least claim to wish their allies would do) are running nasty and inaccurate ads about their opponents.

But, generally (we’re talking mostly about Mitt Romney and Newt Gingrich here, and yes, Gingrich can credibly claim that his side is retaliating for what Romney’s side did to Gingrich in Iowa) it’s hard to believe they mean what they say. After all, the Super PACs are run by their former top political operatives and funded by their own strongest and wealthiest supporters, including many corporations whose identities have yet to be meaningfully disclosed. Romney said in last night’s debate that wishes his political alter egos (or should I say alter ids) would remove inaccurate statements from the ads attacking his opponents but “That’s something that’s completely out of the control of candidates.” 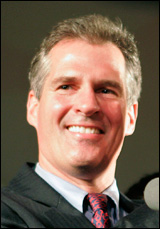 Now back to the Massachusetts Senate race, one of the marquee contests of 2012. The incumbent Republican, Sen. Scott Brown, rocked the political world by winning the special election after Ted Kennedy’s death, costing the Dems their filibuster-proof Senate majority. The likely Dem nominee to challenge Brown is Harvard Prof. Elizabeth Warren, whose enthusiastic attitude toward the creation of the new Consumer Financial Protection Bureau was so alarming to Repubs that they preempted President Obama’s plans to name her as the agency’s first director. This Senate election shapes up as a serious grudge match and is one of the relatively few prospects for a Dem pickup in 2012.

OK, so here’s the deal: Warren and Brown both say they want the outside groups to stay out of their race. But everybody says that and mostly it’s just for show.

So far, sounds kinda familiar. In the presidential race, most of the candidates claim to be upset that their super PAC allies (to whom they are not allowed to speak directly but instead speak to by announcing publicly what they at least claim to wish their allies would do) are running nasty and inaccurate ads about their opponents. 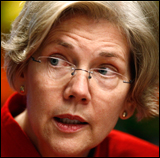 But maybe this version of the shadowplay might turn out something more than gum-flapping because, as reported by Politico:

“Warren said Monday that the campaigns could agree on a common response if third-party groups become active on the airwaves and ignore their demands. ‘That’s certainly within our control,’ she said.

“The back-and-forth started Friday, when Warren responded to Brown in a letter saying she wanted to create an ‘enforceable’ pact to seek an end to radio, TV and online advertisements by outside groups, saying there should be ‘consequences’ for the campaign that does not honor the agreement. The two spoke later that day, and their campaign managers are talking Tuesday about setting a time for a future meeting.

“Asked Monday if she could lay out consequences for not adhering to any agreement, Warren would only say that she wants ‘something that actually means something. No more politics as usual.'”

I won’t try to guess what kind of enforcement mechanism might be devised. And I still suspect that one or both of the Massachusetts candidates is bluffing. But if they came up with a mechanism that works, it could set a precedent for those who want to more than just pretend that they don’t want their best friends to flood the airwaves with attack ads on their opponents for which the candidates can claim they are not responsible.