Apparently, the U.S. Treasury Department has put together a slideshow that it calls “The U.S. Economy in Charts.” (They really need to do some work in the catchy names department.)

Derek Thompson of The Atlantic Monthly has put the whole thing up. Of course, it comes from a Treasury Department, whose boss is preparing to face the nation and ask for a second term and whose stewardship of the economy will be Issue Number One, so it needs to be viewed with appropriate doses of salt.

But if you like President Obama and are tired of hearing the Repub version of how Obamism has destroyed the economy, you’ll find a lot of talking points (at least if you’re talking to a numbers geek).

Here are the first two charts: 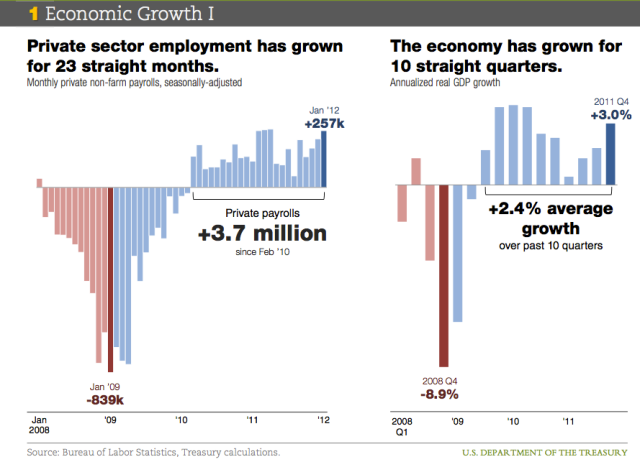 If you want more, take a look at the whole thing on Thompson’s blog. (Or don’t. It’s still really a somewhat free country.)