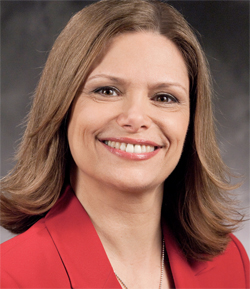 Tarryl Clark, the former state Senator from St. Cloud now seeking the DFL nomination for Congress in the northern Minnesota 8th District (to challenge first-term incumbent Repub Rep. Chip Cravaack) surprised no one by announcing Thursday that she will no longer seek the DFL endorsement in the race, will not abide by the endorsement process and will go directly to the primary against the endorsee.

Except she didn’t quite say that because — despite sending out an 11-paragraph long email  to supporters on the topic — she never mentioned the words “abide,” “endorsement” nor “convention.”

In an interview yesterday, Clark said that her decision had nothing to do with the possibility that she might not win the endorsement. In fact, she expressed confidence to me that if she had stayed in the endorsement contest, she would have been endorsed.

To be blunt, this is simply not credible. I asked Clark if she was aware of any case of a candidate who dropped out of an endorsement contest even though they believed they were in position to get endorsed. She replied: “I’m not focused on what other people have done. I’m focused on the lives of the people in the 8th District.”

On the night of the Feb. 7 precinct caucuses (the first step in the selection of delegates to the congressional district convention at which the endorsement would be awarded), a straw poll was taken. It came out:

That’s a really distant third for Clark in the endorsement campaign.

Nolan has pledged to abide by the endorsement. Anderson said he would abide if everyone in the race committed to abide, but Clark’s decision now means that Anderson will decide later whether he might also run in a primary.

Clark signaled early on that she would not abide by saying that she would abide as long as it was a fair process. Experienced observers of the long-running Minnesota political game of who-will-abide understood the code.

There is a slight extra awkwardness to the non-abidement (no, that’s not a word) of Clark, because in addition to her state Senate term, and her unsuccessful 2010 race for Congress against Michele Bachmann in 6th District, Clark also previously served as associate chair of the DFL Party (2003-5).  In that capacity, she toed the party line on endorsements, which is that DFLers are supposed to go through the endorsement and abide by it. She sought the endorsement, pledged to abide by the endorsement and received it, in all of her previous races. She benefitted from the usual delegate bias against non-abiders in 2010 when she entered the race as the only abider against two non-abiding candidates.

DFL Party Chair Ken Martin issued the obligatory press release yesterday expressing “disappoint[ment] to hear that Tarryl Clark will not be abiding by the DFL endorsement,” which, Martin noted, will “force a primary election” and “risks wasting valuable DFL resources and drawing the focus away from the real goal of defeating Chip Cravaack.” (In such cases, the party usually helps the endorsee defeat the challenger and the chair always rebukes the non-abider for postponing the day when the party can unite against the Republican.)

Nolan also issued a statement of “disappointment” over the news.

Personally, while I understand how it looks to party chairs, I grew up in another state that lacks the Minnesota obsession with abiding by endorsements. I hold no religious views on the subject. The law and the rules permit candidates to challenge the endorsee, which is what primaries are for. In her statement (Headlined: “The People will Decide”) Clark mentioned revered DFL names (former Gov. Rudy Perpich, current Gov. Mark Dayton and long-time 8th District Congressman James Oberstar) who at various points in their careers challenged an endorsee in a primary (although, as I mentioned, she managed to do it without mentioning the endorsement process.)

In our brief interview Thursday, I asked Clark whether it was fair to conclude that she was going directly to the primary because she didn’t believe she could win the endorsement.

Answer: “ No, absolutely not. I think it’s extremely important with what’s at stake, with what’s happening in Washington, with what people like Congressman Cravaack and [Wisconsin Republican Congressman Paul]  Ryan [author of the House Republican budget proposal] are trying to do, to our families, our communities, our seniors, that we reach out to as many people as possible. This is about reaching out broader, not narrower,” in other words, to campaign to the broader primary electorate. She mentioned that about 3,000 people went to caucuses last month while 70,000 voted in the primary in 2010. She mentioned miners who work 12-hour shifts and old people who can’t drive at night as examples of people who have a hard time participating in the evening caucuses. She mentioned the Koch Brothers and the Tea Party as the kind of forces that the DFL is up against; she accused the Repubs (including Cravaack) of shifting the conversation away from how to create jobs and onto divisive, emotional social issues like contraception; she made the case that her life experience and fund-raising ability make her the best DFLer to take on Cravaack.

Look, this isn’t my first rodeo. I’ve heard talking points strung together many times. I just wish Clark had acknowledged that she was dropping out of the endorsement contest because it was clear that she wouldn’t be endorsed and switching to a primary campaign because she still believes she can win a primary.

Clark’s email announcing her decision doesn’t seem to be online as a press release or anything, so if you want to see whether you agree with my treatment of her circumlocutions, a link to the full text is just below under “information and documentation.”

Update and correction: When I wrote the original version of this post, I hadn’t spoken to candidate Jeff Anderson and I mischaracterized his position on the endorsement process. My bad. I’ve spoken to him now and fixed the error. I’ll post a bit more soon on the complexities of his current stance, since Clark’s announcement, on whether he will continue to abide by the endorsement process.