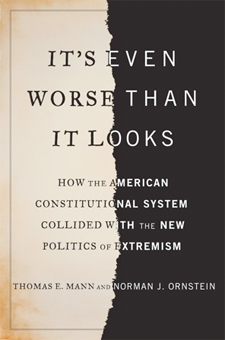 As they wrote their current book about political dysfunction in Washington, titled “It’s Even Worse than It Looks,” political scientists Tom Mann and Norm Ornstein worked out a sentence that they knew was going to, among other things, shake up their carefully built reputation for nonpartisan political analysis and scholarship. Here’s the sentence:

“The Republican Party has become an insurgent outlier, ideologically extreme, contemptuous of the inherited social and economic policy regime, scornful of compromise, unpersuaded by conventional understandings of facts, evidence and science and dismissive of the legitimacy of its political opposition.”

Ornstein (a born and raised Minnesota boy) and Mann discussed the book before a packed audience Monday at the U of M’s Humphrey School of Public Affairs. Mann read out the sentence and said he and Ornstein made sure they had backup for every syllable of it.

The book has taken off beyond most political science volumes written by academics and, one might say after Monday’s session, liberated the authors from the burden of worrying whether some particular word they uttered might cost them their nonpartisan credibility.

In fact, they said Monday, the blame for the current dysfunction is not all on one side. But most of it is, and the new reality that what might be called Gingrichian Republicanism has ushered into Washington has to be acknowledged and confronted. 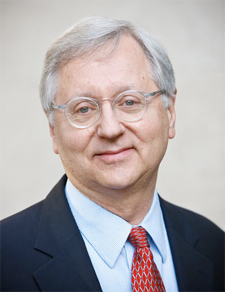 Mann said Newt Gingrich’s breakthrough — developed during his successful 1980s-era campaign to break the hold of Democrats on the House of Representatives — was to adopt rhetoric that separated the two parties into polar opposites that had more than differences of opinion over policy but represented, in Mann’s words, a choice between “good and evil, right and wrong, Americans and others.”

When you have Republicans filibustering to delay votes on matters that — when they finally do come to a vote — pass unanimously or nearly unanimously, you know that the issue is something more than a disagreement over the bill or the nomination, Ornstein said.

“The level of divide has become tribal, not partisan,” he said. You look at the issues that have come up and positions that prominent figures in politics have taken over a decade and then suddenly abandon those positions and call them horrible things, that shows that’s it not so much about ideology.

“I’ve watched people who, until a few years ago said that a health care mandate was the way to go. [The same people] now say a mandate is obviously, totally unconstitutional and it’s socialist besides. That tells you that it’s not just about ideology. It’s who is promoting an idea, rather than what the ideas are.” 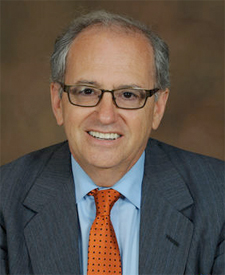 Translation: If President Obama is for something, Republicans have to be against it, even if it might take them a while to think of some more substantive-sounding reasons to be against it.

Former Vice President Walter Mondale was also on the panel yesterday, although he didn’t give a full presentation as the two authors did. When Mondale was asked about the attitude in his old club, the Senate, toward the filibuster, he said when he talks to Democrats about the need to change the rule, they tell him they are worried that the Republicans might capture control of the Senate and then the Democrats will be the ones who need the filibuster to block action.

Ornstein, who is a buddy of Al Franken’s, actually started the event with some stand-up comedy. If you’ve read this far, you deserve to see the jokes:

• “Mitt Romney is deep into his vice presidential search. His spokesman said he would choose an incredibly boring white guy. Joe Biden said, ‘Why not? It worked for Obama.’ “

• “But he’s got a lot of options. A couple of weeks ago, he was in Las Vegas with Newt Gingrich and Donald Trump, or as someone called it, ‘The Hangover, Part 3.’ “

• “Donald Trump, by the way, had his 70th birthday while he was in Las Vegas. And the first thing he did when he got up was demand to see his own birth certificate.”

• “Gingrich would actually be the best running mate for a balanced ticket. You’d have a Mormon and a polygamist.”

• “Actually there’s another balance that’s been mentioned. We have a survey of middle-aged guys. The vast majority think they look like Mitt Romney. They actually look like Newt Gingrich.”

And Ornstein closed his remark with tragicomedy, saying that he and Mann had collaborated on a previous book about Congress called “The Broken Branch.” Their new book is called “It’s Even Worse Than You Think.” Ornstein said: “We don’t want to have to come back in a few years and write a third book that would have to be called ‘Run for Your Lives.’ ”