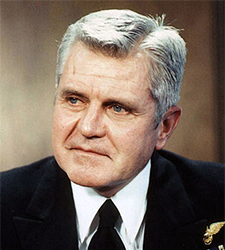 As a quadrennial curtain raiser for the vice presidential debate, I’ve started a small tradition of paying tribute to Adm. James Stockdale. He is an American hero and also a symbol of something that should bother us about our political culture.

Stockdale was a Navy pilot during the Vietnam War. Shot down over North Vietnam, he was captured, beaten and held prisoner for seven years, during which he was routinely tortured but also managed to engage in enough resistance efforts that he was eventually isolated by the Vietnamese from the main POW population. Other POWs, including Sen. John McCain, have said that Stockdale was a hero to whom the other prisoners looked for leadership and inspiration. He was awarded the Medal of Honor. After the war, Stockdale wrote about the philosophy of the Greek stoics, served as president of two colleges, and recovered his health.

Just in case you haven’t been able to place where you heard about Stockdale before, he was Ross Perot’s running-mate on the 1992 independent ticket. Originally, Stockdale agreed only to be a place-holder on the ticket and Perot promised to replace him before the election, but for various reasons that never happened and Stockdale appeared opposite Republican Dan Quayle and Democrat Al Gore in the 1992 vice presidential debate 20 years ago this week.

White-haired, suffering from hearing-loss from his captivity, untrained in dark arts of televised celebrity and the even darker arts of political sound-bite-ology, Stockdale sometimes seemed dazed and confused during the debate, which became symbolized  by what he chose as his opening line of his opening statement, the rhetorical question: “Who am I? Why am I here?”

Stockdale died in 2005. He did not become vice president. An institute at the Naval Academy that is named for Stockdale is a center for “ethical leadership.” Those who know his story think of him with respect, admiration and gratitude. But, unfortunately, most Americans who remember anything about Adm. Stockdale remember him as a confused white-haired hard-of-hearing old joke, who mysteriously showed up in a veep debate and seemingly didn’t know who he was or why he was there.

The ruination of a great man’s legacy is one thing that should bother us about our political culture in the age of televised debates.

“Who am I? Why am I here” entered the sorry history of famous utterances during debates, torn out of context and remembered because they were supposedly dumb (Gerald Ford’s “There is no Soviet domination of Eastern Europe”) or wickedly clever put-downs (Lloyd Bentsen to Dan Quayle: “Senator, you’re no Jack Kennedy”) or for no particular reason unless you were there and saw how handsome the guy looked in his suit and how regular-guyishly he wagged his head (Ronald Reagan to President Jimmy Carter, “There you go again”).

Then there are the non-utterances, like when George H.W. Bush was caught on camera looking at his watch while a member of the audience was asking a question. Seriously, did we really want to vote against a guy for president because he looked at his watch? The watch-glance was on my list of dumbest great moments in debate history. But my main point is that pretty much all the great moments are substanceless and ridiculous and told us nothing we should have weighed seriously in deciding our votes.

I strongly favor the young tradition of presidential candidates debating, especially if the chief alternative source of information is a 30-second ad. I wish (but don’t particularly hope) that someone could devise a format or find a moderator who could extract more meaningful statements. But when we have an audience that is mostly judging the candidates or their appearance, their body language, their rehearsed zinger or even their worst slip of the tongue, it’s hard to get hopes too high.

Adm. Stockdale and other dumbest great moments in debate history