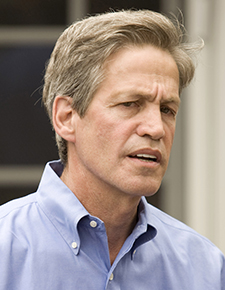 Minnesota’s own Norm Coleman has been telling selected pro-choice groups in Ohio that a Romney presidency would not lead to the reversal of Roe v. Wade.

Here’s the quote, from former Sen. Coleman (now head of a pro-Romney SuperPAC, as reported by TPM and others):

Hmmm. Romney, who ran as a supporter of abortion rights and his Massachusetts campaigns then switched his basic position after he set his sights on the Republican presidential nomination, says this on his campaign website under “Values:”

Mitt believes that life begins at conception and wishes that the laws of our nation reflected that view. But while the nation remains so divided, he believes that the right next step is for the Supreme Court to overturn Roe v. Wade – a case of blatant judicial activism that took a decision that should be left to the people and placed it in the hands of unelected judges. With Roe overturned, states will be empowered through the democratic process to determine their own abortion laws and not have them dictated by judicial mandate.

Roe was originally adopted by a 7-2 U.S. Supreme Court majority in 1973. The scope of the pregnant woman’s right to decide whether to have an abortion has been scaled back by subsequent rulings, but the fundamental finding that a woman has that choice in the early stages of a pregnancy was most recently upheld by a 5-4 majority. If one of the five who voted to sustain it was to retire in the next four years and was replaced by a fifth vote to overturn the fundamental ruling in Roe, the issue would be returned to the states and states that voted to do so could ban abortion entirely, which was the situation in most states before Roe. And this is what Romney says he wants to do.

Of the five remaining votes to sustain Roe, three are justices in their 70s, Ruth Bader Ginsburg, Stephen Breyer and Anthony Kennedy. Although Ginsburg has had cancer, it is likely that she and Breyer would prefer to retire under a Democratic president. Kennedy, 76, was a Reagan appointee, sides with the other Republican appointees on many issues, has been on the court 24 years and is the second most senior member. It would be the purest guesswork to speculate on when he plans to retire or whether he is determined to retire under a Republican president.

But if Kennedy is waiting for a Republican president, and Romney becomes president, and if Romney is sincere in his current position that Roe should be overturned, then the election of Romney could very likely bring about the reversal of the fundamental ruling in Roe.

So what could Norm Coleman mean when he says that Roe is “not going to be reversed”? He apparently didn’t explain in Ohio yesterday, and the best guess is that he can’t explain.

There is one fig leaf available to someone in Coleman/Romney’s predicament. By tradition, justices do not commit themselves to rule in particular ways in advance of their nomination or confirmation. Perhaps this is the loophole available for Coleman to explain away his statement. But under the current norms of Supreme Court appointments, which rely heavily on an analysis of a nominee’s likelihood for voting for or against Roe, a president is expected to go to great lengths to nominate justices who agree with his party’s position on Roe. Romney, in fact, has already gone further than used to be fashionable in taking a position on how the Supreme Court should rule.