The framers constructed (so it is said) an exquisite balance of branches, separate and co-equal. There’s quite a bit of mythic (rather than actual black-and-white) Constitution around those concepts, especially the fairly ludicrous suggestion that the Framers intended the judicial branch to be equal to the other two.

Nonetheless, when we have survived a political crisis (the Watergate crisis, in which President Richard Nixon obeyed a court order to hand over the tapes, the Bush v. Gore crisis, in which someone had to decide who had won the election and Al Gore agreed, as Nixon had done, that the Supreme Court had the final word) we go through a ritual of declaring that the Framers’ system still works.

Over the years, I’ve grown leery of “the system works” triumphalism. (Would it have worked in the Watergate case if a security guard hadn’t come upon the Watergate burglars? Would it have worked if the case had been assigned to a less brave and honest judge than the late John Sirica? And what would have happened if Nixon had refused to abide by the ruling? He was, after all, the sitting commander in chief at the time.)

The-system-works triumphalism is less common nowadays, with many Americans losing trust in elements of the system and frustrated that it doesn’t seem to be working to address (or to address correctly) whichever national social and economic problems they think most urgently need addressing.

Today’s installment of Imperfect Union focuses on the U.S. Supreme Court, one of many major institutions whose approval, respect and standing with the public is at record lows. (At least that’s true since the dawn of approval rating polling. We don’t know much about the percentage of Americans who thought the Supremes did a good job on the hideous Dred Scott decision of 1857 or willfully blind Plessy v. Ferguson in 1896, which ruled that requiring blacks to sit on a separate rail car could be reconciled with a constitutional requirement of  “equal protection.”)

Is the Supreme Court working the way we want it to? If not, what has changed? Is it fulfilling the role assigned to it by the Framers of the Constitution? Has it become too powerful, too political, too what?

In a modern democratic system, is it OK to have the least democratic branch overrule the elected branches? Can nine judges, unelected but chosen through an increasingly politicized and ideological process, really divine the one true meaning of words and phrases in the Constitution that the long-dead framers and ratifiers never discussed or contemplated?

We consider our system (much more than the Framers did) to be a democracy, fundamentally committed to the idea of majority rule.

But the power of our elected branches to pass laws is also, in some hard to define way, balanced against a commitment to protect the fundamental rights of minorities, even against the democratic legitimacy of the majority. In our mythic system at least, those rights are embedded in the Constitution, in which the most fundamental of those rights are sheltered from majority rule unless the majority can amass the colossal supermajority necessary to amend the Constitution.

A June New York Times/CBS poll found that just 13 percent  of respondents said that Supreme Court justices decide their cases based purely on legal analysis, while 76 percent said they let their personal political views influence their decisions. That seems very bad and dangerous to the myth that binds us. But you wouldn’t want to overreact to a question taken on a poll when we, the people, are in such a deeply cruddy mood. . And, on the other hand, how many of you reading this article disagree that politics influences the Supreme court’s rulings?

The 5-4 ruling to uphold the constitutionality of most aspects of the Affordable Care Act (aka Obamacare) was a big blow against the court’s reputation – and especially the reputation of Chief Justice John Roberts – among Republicans, who had previously held a more favorable view (than Democrats did) of the court.

Of course, it’s easy to assume that this reaction was mostly just understandable Republican disappointment that they did not get the result they wanted and expected – especially given the perception that the court has become more partisan and ideological over recent years (exactly how many years is open to partisan and ideological disagreement.) And, of course, it’s pretty likely that if Roberts had voted with the other four conservative Republican appointees to overturn – on what would have been a novel theory of the limits of Congress’ powers under the interstate commerce clause – the signature achievement of a liberal Democratic president and which passed all other hurdles our system requires for a new law, some of the underlying myths/problems/vulnerabilities/grey areas of our constitutional system of government would have been laid open on the table for fresh discussion.

Let’s start over with a few very blunt statements:

There’s no way the Framers set up three “coequal branches” of government. Article I, setting up the Congress, is 10 times longer than Article III, setting up the judiciary. The Supreme Court is not given any powers other than to decide cases. The Framers did not bother to pick a number of justices for the Supreme Court. They did not establish even a minimum age for justices, as they did for the president (35), senators (30) or House members (25). The Framers left it up to Congress to fill in the rest of the federal judiciary, but the Framers did think it was important federal judges not be susceptible to political intimidation, so they established that judges – unlike any other office-holders – would have lifetime appointments, removable only by impeachment for bad behavior.

No explicit power to strike down laws

Even more to the point, the Constitution does not give the Supreme Court the power to strike down laws. Read the very short Article III. It doesn’t come close. You could, if you were of a mind to, infer that such a power is implicit, but you have to squint pretty hard. (The argument suggests that when Article III says “The judicial power of the United States, shall be vested in one Supreme Court,” the power to strike down laws was understood to be part of the “judicial power.”  You can find statements at the time implying that the Framers had something like that in mind. Alexander Hamilton said it pretty bluntly in Federalist Paper #78.  Many historians believe that knowledgeable participants assumed that something like the power of judicial review – including the power of the judiciary to nullify statutes that violated the Constitution – existed.) 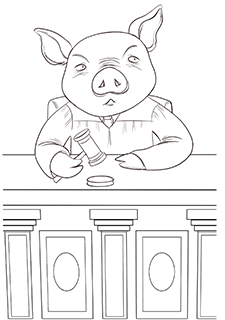 Madison’s notes on the constitutional convention quote only a few of the Framers expressing an opinion on the idea giving the judiciary such a power. More of them favored it than opposed it, but the majority said nothing about it and apparently no one suggested that such a power ought to be expressly granted. There is no record of any vote at the convention on such a matter.

Americans in general are fairly sentimental about the judicial supremacy, although most of them were taught in a junior high civics class that such a power is clearly based in the Constitution. And you could make a case that, whether intended or not, the power has done more good than harm over the centuries, although the preponderance of evidence is hardly clear on that point.

But just to be quite clear, especially for those who believe that the power of the federal government is limited to those powers explicitly granted and enumerated in the Constitution: The Constitution contains no statement that a statute passed by Congress and signed by the president can be invalidated, abolished or modified by the Supreme Court. If the Framers had such a power clearly in mind, those who believe in “enumerated powers” must dearly wish they had said so in the document. Except they don’t bother dearly wishing it. They just go ahead and pretend it’s there, when it isn’t.

This supreme judicial power, which most Americans assume is in the Constitution, was first used – one might say it was established or discovered by the Supreme Court — in the landmark case of  Marbury vs. Madison in 1803. There is something surreal about the court “discovering” in the Constitution an unwritten power that made itself the supreme decider on all matters constitutional.

It becomes even more surreal – one might even say creepy – once you learn the facts of that case, which I would say was a stinkpot of hardball politics, partisanship, questionable logic and conflicts of interest.

I realize that I just maligned one of the most beloved of all court rulings in the history of the world. But I’m prepared to back it up, if you come back to this space tomorrow.

Some constitutional myths about the Supreme Court