New Year’s Day, in case you missed it, was the 150th anniversary of the effective date of the Emancipation Proclamation, issued by President Abraham Lincoln on Jan. 1, 1863.

There is a revisionist version of Lincoln’s role and motives that tend to rob him of much of the moral credit for his role in the emancipation of millions of humans held as chattel. I seem to remember when I used to subscribe to a version of it. In my dotage, I now view almost all of the facts leading up to that day and beyond as redounding to Lincoln’s credit, although they paint a picture more complex than the storybook version of one tall, wise president committing a brave and compassionate act.

Lincoln had, for years, denounced slavery as a moral wrong. But, as a practical politician, he had never endorsed abolition as a government policy. If he had, he wouldn’t have become president. In fact, one of the reasons Lincoln won the Republican nomination in 1860 is that his chief rival for the nomination, William Seward, was viewed as holding such radical anti-slavery views that he would be unelectable.

Lincoln asserted that the government lacked the constitutional power to abolish slavery. And he was probably right. The Constitution was riddled with provisions designed to protect the property rights of slaveholders and subtle enforcement mechanisms built into the political structure to reassure the southern states that they didn’t have to worry about abolition.

Lincoln’s main push, in the years leading up to his election in 1860 (similar to Seward’s), was to prevent the further spread of slavery into new states. In Lincoln’s famous “House Divided” speech of 1858, he expressed the hope that by preventing the spread of slavery into new states as the nation expanded westward, the institution would be placed onto a path toward what he called “ultimate extinction.”

The secession of southern states started after Lincoln’s election in 1860, but before he took office. The actions were clearly, at least in part, a reaction by the seceding states to the election of a president who hoped to place slavery on a path to extinction.

Preserve the Union or abolish slavery?

During the early days of the secession crisis, Lincoln even agreed that, if it would reassure the South, he would support a constitutional amendment to make explicit that the national government had no power to interfere with slavery in the states where it was established. That’s one of those facts I referred to above that makes you wonder about Lincoln’s courage or his wisdom or his priorities. That constitutional amendment idea didn’t fly, but it did establish a policy that Lincoln followed from the beginning of the Civil War, which was that the paramount goal was to preserve the Union, not to abolish slavery.

It looks to me as if Lincoln was very open to seizing an opportunity to free the slaves, as long as it was consistent with his uppermost goal of preserving the Union, and the intermediate goal of keeping a majority of the North united behind his policy.

In August of 1862, the crusading New York editor Horace Greeley publicly called on Lincoln to be more aggressive about the abolitionist agenda, Lincoln replied, in a public letter addressed to Greeley, thus:

Although Greeley didn’t know it at the time of this exchange, Lincoln had already drafted the Emancipation Proclamation, but was waiting for the Union Army to win a convincing military victory so that he could issue it without an air of desperation.

That victory occurred at the Battle of Antietam, Sept. 17, 1862. Five days later (and exactly 100 days before New Year’s Day), Lincoln published not the proclamation itself, but the document known as the “preliminary” Emancipation Proclamation. That document announced that, effective 100 days later, the slaves would be free (permanently) in any states still in rebellion.

This can be, and perhaps should be, taken as further evidence that Lincoln’s top priority was to save the Union. Any slave state willing to rejoin the Union would be allowed to keep its slaves. In fact, none of the secessionist states took Lincoln up on the “offer,” so on Jan. 1, 1863, Lincoln followed through with the final proclamation. It applied to 10 states, which were explicitly named in the document.

That meant that the emancipation did not apply to the four border slave states that had remained in the Union (Delaware, Maryland, Kentucky, Missouri) nor the one state that seceded but had already re-entered the Union (Tennessee). This again would fit that theory that Lincoln’s motives were about the war, not the slaves. The slave states that were not in rebellion would not be “punished” by the loss of their slaves, only those that had seceded. 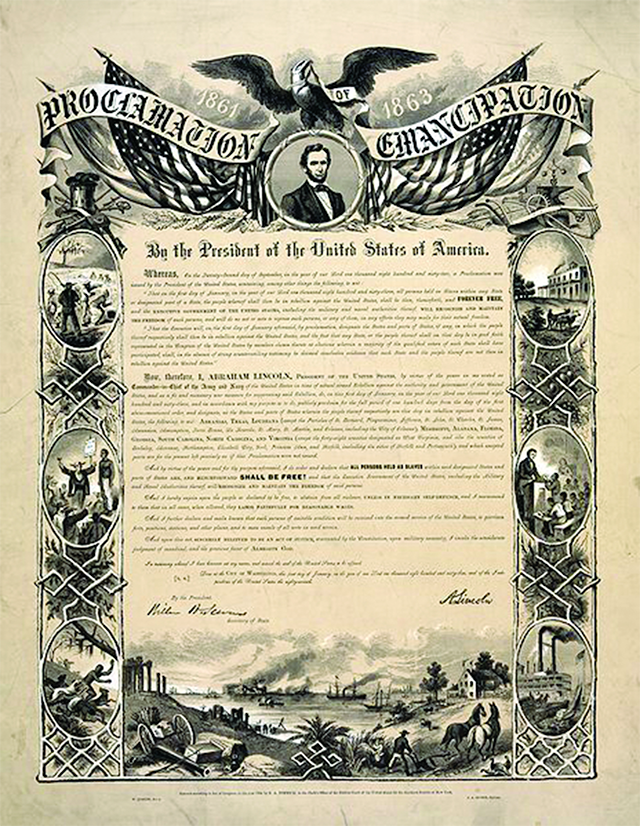 It’s often said (and was said even by Seward at the time) that the proclamation didn’t free any slaves at all. But that is false both technically and in a much more important sense.

Technically, small but significant numbers of slaves, estimated by slavery historian Eric Foner at 50,000-70,000, were in states covered by the proclamation but in areas occupied and controlled by Union forces. Union officers systematically read the proclamation to those slaves, informing them that they were free, permanently, to go where they pleased. But at first, that was only 2 or 3 percent of the slaves in the United States.

The more important short-term impact of the proclamation was that, as the Union forces captured more and more territory in 1863 and 1864, the emancipation spread until it eventually applied to most of the slaves in the South. The exception would have been slaves in the states that had remained loyal to the Union, and these were border states in which slavery was much less widespread. Three of those states took action on their own to end slavery within their borders.

Technically, the Emancipation Proclamation was taken by Lincoln as a military measure under his commander-in-chief powers. Congress did not vote on it. And without doubt, the proclamation did benefit the military effort. Some freed slaves helped the Union forces and, as the South lost its slaves, the economies of the southern states were undermined.

But Lincoln’s long-standing record as a voice against slavery makes it ultimately unconvincing that he was acting only as a commander-in-chief, trying to win a war. Taken by itself, his response to Horace Greeley seems to declare bluntly that the Emancipation Proclamation was a war measure and little else. But bear in mind that Lincoln, running for reelection in 1864, advocated for a constitutional amendment to abolish slavery once and for all, in every state. And, as those who have seen the recent film version of this tale know, he devoted many of the last days of his life to muscling and cajoling that amendment through the Congress.

It requires a two-thirds vote of both houses of Congress and ratification by three-fourths of the states to amend the Constitution. Do the math. The United States consisted of 32 states, 15 of which had legal slavery. Even if you were to assume that the 17 non-slave states were prepared to use the mechanism of a constitutional amendment to abolish slavery (which was not the case before the Civil War), the math is nowhere near adding up to a constitutional amendment, nor even to a two-thirds majority in the Senate to refer such an amendment to the states. It was really the secessions that changed the math and paved the way for the 13th Amendment.

I do occasionally wonder if the southern states has simply decided to stay in the Union and use their numbers in the Senate and in the ratification process to block any effort to abolish slavery, how much longer the institution might have lasted. Lincoln’s original idea of preventing the spread of slavery into new states might have put the institution onto the path of ultimate extinction, but it might have taken many more decades. In fact, even in the modern 50-state nation, 15 states are enough to block the ratification of a Constitutional amendment.

But somehow or other, Abraham Lincoln had his hand on the tiller, and he sailed about as fast as possible toward the extinction of slavery. And he gave his life before it was finally realized.  The 13th Amendment was approved by Congress in January of 1865, with a two-thirds majority of the House, shrunken by the absence of the Confederate states. Lincoln was assassinated in April. The ratification continued until December when – ironically – ratification by Georgia provided the three-fourths ratification necessary to permanently end at least de jure slavery in the United States.

Reconsidering the Emancipation Proclamation: What were Lincoln’s motives?