I’m a month or so late in seeing this, but if you have the time I highly commend this book review from the January-February issue of Atlantic about the Cuban Missile Crisis. It will not only revise some of what you think you know about the crisis, but also serves as a reminder of how hard it is to bravely follow your thoughts and questions where they lead instead of always tacking back to the safety of groupthink.

Although the 50th anniversary of the missile crisis was last fall, it hasn’t exactly been in the news much. Still, the Cuban Missile Crisis of October 1962 is very likely the closest we (and by “we” I mean the world) have ever been to a straight-on war between nuclear superpowers. Maybe we all know just enough about it to be dangerous.

The Atlantic piece and the book it reviews are based on the complete transcript of the deliberations of the special ExComm (executive committee) of top Kennedy administration officials that met during the famed “13 Days” of the crisis.

It turns out that a huge portion of the received version of the story that we were all raised on is a lie. Bobby Kennedy’s book, titled “13 Days,” was the main source for the lies, but there are many more sources. Even the recent treatment of the crisis in the great Robert Caro series on LBJ follows the conventional mythology and ducks the really hard questions.

The new book is titled “The Cuban Missile Crisis in American Memory; Myths versus Reality.” Its author, Sheldon M. Stern, worked as a historian at the Kennedy Library in Boston from 1977 to 2000, and was the first person who was not an ExComm member to have access to the full set of tapes made of the ExComm meetings. He had read, and accepted, the fundamental accuracy of “13 Days” before he listened to the tapes and discovered falsehood after omission after distortion.

The biggest distortion was the role of RFK himself. The received version, which relies on RFK’s own book and on the testimony of Kennedy loyalists, generally portrays RFK as a cool-headed voice of reason. Stern found that the tapes revealed Bobby Kennedy as “confrontational and hawkish from day one through day thirteen — and even beyond into the November post-crisis.”

(In this piece, for the History News Network, Stern summarizes nine strong, clear contradictions between the “13 Days” version and the evidence of the tapes.)

The Atlantic book review that got me started on this post, written by the magazine’s national editor Benjamin Schwartz, takes a somewhat different tack. Schwartz seizes the occasion to work through elements of the heroic version of the tale that clearly have bothered him for years. He challenges fundamental elements of the tale, starting with the argument that it was worth risking a nuclear confrontation to keep those missiles out of Cuba in the first place.

For example, the United States had nuclear missiles positioned in Turkey, close to the Soviet Union. The Soviets weren’t happy about that and Schwartz surmises that this fact absolutely contributed to Nikita Khrushchev’s decision to put Soviet missiles in Cuba.

The Soviets had ICBM’s on their own territory that could reach the United States (just as we did, only we had more and better missiles) and missiles on submarines that could rise up out of the ocean and nuke us from close range (just as we did) so the fact that missiles in Cuba could reach the U.S. quickly was of no real consequence. The Soviets weren’t violating any international laws by installing missiles on the territory of a willing ally (any more than the Turks were in allowing our missiles) but the U.S. decision to blockade Cuba actually was an illegal act of war.

The tapes indicate clearly that JFK, RFK and the ExComm generally realized that the Cuban missiles would not have significantly altered the real military balance of power which greatly favored the United States and would have continued to do so.

Maybe this comes across as a summary compiled by a self-hating American of the notoriously subversive media elite. But, on the tapes, the Kennedy brothers and their advisers make all the same points. From the Schwartz review:

“A missile is a missile,” Secretary of Defense Robert McNamara asserted. “It makes no great difference whether you are killed by a missile from the Soviet Union or Cuba.” On that first day of the ExComm meetings, Bundy asked directly, “What is the strategic impact on the position of the United States of MRBMs in Cuba? How gravely does this change the strategic balance?” McNamara answered, “Not at all”—a verdict that Bundy then said he fully supported. The following day, Special Counsel Theodore Sorensen summarized the views of the ExComm in a memorandum to Kennedy. “It is generally agreed,” he noted, “that these missiles, even when fully operational, do not significantly alter the balance of power — i.e., they do not significantly increase the potential megatonnage capable of being unleashed on American soil, even after a surprise American nuclear strike.”

So what exactly was it about the Cuban/Soviet that might be worth starting World III over? 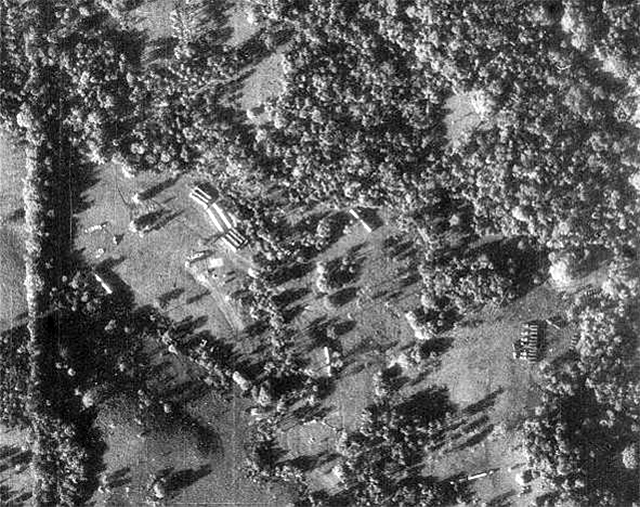 Courtesy of the CIAA U-2 reconnaissance photo showing evidence of missile assembly in Cuba. Shown are missile transporters and missile-ready tents where fueling and maintenance took place.

The Republicans would surely make hay if the Soviets seemed to be stealing some advantage of JFK’s watch. Schwartz quotes Defense Secretary Robert McNamara who, in his retirement, emphasized that JFK felt allowing the missiles would be politically unacceptable.

On the tapes, JFK said that he had recently said publicly that the United States would not permit the Soviets to put missiles in Cuba, although he added: “I should have said … we don’t care.” Schwartz adds in his own voice: “Washington’s self-regard for its credibility was almost certainly the main reason it risked nuclear war over a negligible threat to national security.”

The always popular presidential belief that the U.S. needs to show resolve and toughness in order to deter future provocations. And here Schwartz really unburdens his chest challenging what he calls the playground logic:

Thank goodness Khrushchev decided this wasn’t worth blowing up the world over. But as I torture myself with all these misgivings about the way the Kennedy brothers and their genius friends handled the crisis, I realize that I’ve known most of these facts and arguments for years. It’s just that they are usually narrated by someone who is on board with the Camelot myth and is able to make them sound heroic and wise.

I was 9 years old when John F. Kennedy was elected, and a Bostonian, and with parents who were FDR-worshipping Democrats, and he looked so good on TV. I continue to be impressed with the power of wanting one’s team to be heroic, and able to believe that they are, even when the facts point in a different direction.