By a huge margin, the United States incarcerates a larger portion of its population than other developed nations. The comparative numbers are staggering, so before I get to the main argument made by Yale political scientist Vesla Weaver Tuesday at the Humphrey School, here are a few of the comparative numbers from the International Center for Prison Studies. Listed next to the nations below is the number of number of people in prison in each country per 100,000 population:

The U.S. incarceration rate declined over the last three years, but before that it increased for 35 consecutive years, Weaver said. In addition to those who are currently locked up, 16 million ex-felons are out of prison in the United States. Thirty percent of young males have been arrested by the age of 23, Weaver said.

The U.S. prisoner and ex-prisoner population is overwhelmingly disproportionately African-American. And the prisoners (Weaver likes to describe those who are or have been incarcerated as “custodial citizens”) are overwhelmingly drawn from predominantly black inner-city neighborhoods. That’s not much of a surprise, but Weaver offered one striking statistical illustration.

In the absence of a more thorough study, none of the above proves that racism per se is the explanatory factor, although many laws and policy decisions contribute to the racial breakdown of the prison population. But in her talk Tuesday, Weaver focused more on the impact of this situation on the functioning of democracy in America.

At the most obvious and direct level, the U.S. practice of canceling the voting rights of felons, coupled with the unusually high level of incarceration, removes a large (and disproportionately black) number of  citizens from the rolls of potential voters. The numbers are big enough to affect the outcome of many close elections. 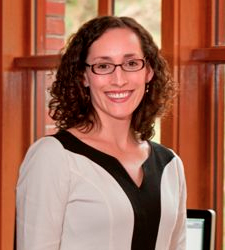 (I asked Weaver after her talk whether the U.S. practice of depriving ex-prisoners of their voting rights for long periods after they leave prison was common around the world. No, she said. In fact, many countries allow convicted felons to vote from prison while serving their sentences, in the belief that this reduces the long-term impact of the inmates’ removal from and alienation from society. But she said it is extremely rare, outside the United States, for ex-felons to be deprived of their votes after release from prison.)

But the explicit suspension of voting rights was only the tip of Weaver’s larger argument, which is the subject of her forthcoming book “Policing Citizenship: America’s Antidemocratic Institutions and the New Civic Underclass,” which relies heavily on interviews that Weaver and her co-author Amy Lerman conducted in the high-crime/high-police-presence neighborhoods.

Not just among those who are arrested but among their families, friends and neighbors, the heavy police presence in those neighborhoods causes residents to see the police as the embodiment of the government and creates a fear of and hostility toward the whole idea of government in ways that undermines any aspiration they might otherwise feel to participate as citizens. It creates a common desire among young black men in such neighborhoods to keep their heads down, not be noticed and stay off the grid in the belief that getting noticed leads to getting at least hassled if not arrested.

Part of the theory behind a heavy police presence in high-crime neighborhoods — the zero-tolerance-for-crime approach, the focus on cleaning up graffiti and fixing broken windows — was to give the law-abiding citizens of those neighborhoods confidence in the police and a willingness to engage with the government in ways that might even help them break out of the cycle of poverty.

“The stability of democracy depends on the losers, or least powerful, to still believe they can enter the contest, to still abide by the same system rather than seek to subvert it,” Weaver said. But her interviews convinced her that the opposite is occurring.

How a heavy police presence in high-crime neighborhoods hurts democracy