Perhaps adopting the word “scandal,” as I did in the headline on this post, is getting ahead of ourselves. Three separate stories, which some are prepared to treat as scandals, have Washington buzzing and spinning. They are:

All three represent things worth talking about, explaining what went wrong and investigating. One can imagine a healthy political culture in which this could occur constructively.

Given the state of our hyper-partisanized finger-pointing political culture, it’s natural that many on the right will exaggerate the gravity of each of them and many on the left will dismiss them as the latest instance of Obama Derangement Syndrome.

You will hear sadder-but-wiser Washington pundits talking about “second term syndrome,” which they treat as an iron law that a president unfortunate enough to be reelected cannot avoid having the second term clobbered by scandal (Nixon/Watergate; Reagan/Iran-Contra; Clinton/Monica Lewinsky).

Some on the left are convinced that there is no way to stop the Republican-controlled House from turning some combination of the three into a full-fledged impeachment crisis. In a piece for the Daily Beast headlined “The Coming Attempt to Impeach Obama,” Michael Tomasky writes that, of course impeaching Obama would be utter madness, but, he argues, “utter madness is what today’s Republicans do.”

That seems a little strong to me and I don’t think we are headed for serious impeachment talk. But, Constitution maven that I pretend to be, I would point out that impeachment requires only a majority vote in the House, and Republicans have a majority. And it is up to the House majority to decide what constitutes an impeachably high crime or misdemeanor. On the other hand, removal of the president (which has never happened) requires a two-thirds vote in the Senate. Even if the Repubs pick up the six Senate seats they need to take over control of the Senate in 2015, they would be nowhere near the two-thirds needed to convict. On the third hand, or whatever hand I’m up to, if the Repubs really want to shut down the government, an impeachment process will pretty much do it.

In the matter of Benghazi, we are a thousand miles away from evidence that President Obama said or did anything that could be ginned up into an impeachable offense. Congressman Darrell Issa (R-CA), who is leading the charge on that one, did a good job on “Meet the Press” on Sunday repeating on every possible occasion the three areas about which he believes further inquiry is justified, namely:

Again, in a healthier political environment it should be possible to try to learn the right lessons, especially on the first two questions, to decrease the chance of future deaths. But on the first two, there is little chance that any mistakes were the result of malfeasance in the sense of ill motives.

On the “talking points,” certainly the editing that occurred seems suspicious. The basic Repub assumption — that someone was trying to hush up any references to terrorists because that would undermine the Obama we-have-decimated-Al-Qaida narrative in the middle of the 2012 campaign — is perhaps credible but, so far, not backed up by a scintilla of evidence.

In his column in Tuesday’s New York Times, David Brooks produces an impressive narrative of the evolution of the talking points, suggesting that a key factor was inter-agency blame-shifting between the CIA and the State Department.

But either way, bear in mind, we are talking only about a document prepared to get an administration spokesperson through appearances on the Sunday talk shows. If it is a crime to be less than totally forthcoming on a TV talk show, I fear the entire political class is in trouble. 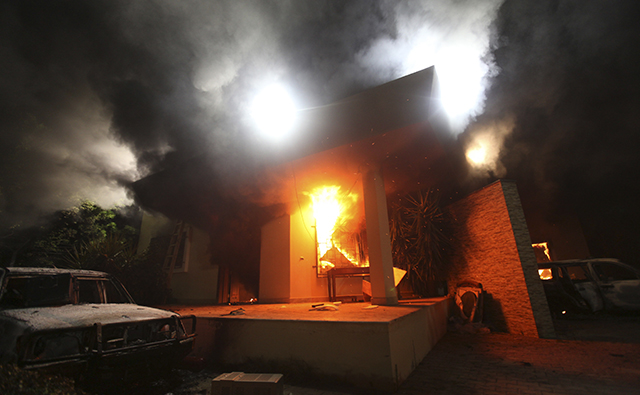 REUTERS/Esam Al-FetoriThe U.S. Consulate in Benghazi in flames on Sept. 11, 2012.

Yes, if it turns out that President Obama issued an order to Susan Rice to lie to the American public to help him get re-elected, that would be a scandal. But even then, I doubt it would be a seriously impeachable offense.

Eleanor Clift dug up Watergate figure John Dean for his impression of the gravity of the Benghazi scandal:

The former White House counsel dismissed the flap over Benghazi as “loose charges” in search of a scandal, and the battle over the talking points “a CYA [cover your ass] operation between two different agencies,” with the State Department and the CIA seeking to shift blame for the security lapses that led to the deaths of four Americans.

“’When you have a good scandal, one that has legs, you know what the underlying problem is,’” Dean said. Benghazi fails that test.

President Obama, by the way, keeps asserting that within three days of the Benghazi, incident he “acknowledged that this was an act of terrorism.” That is designed to mock the idea of any big, false, administration effort to deny that fact.

WashPost fact-checker Glenn Kessler keeps reminding folks that that’s a substantial exaggeration of what Obama actually said. I admire Kessler’s tenacity in the pursuit of factual accuracy. And Obama should drop that particular defense (which he also used to great effect in one of the presidential debates) or he runs at least a slight risk of getting into what-the-meaning-of-the-word-is-is territory (although, unlike President Bill Clinton’s “is-is” moment, Obama wasn’t speaking under oath).

This is the worst of the three “scandals” in term of actual wrongdoing. The IRS should absolutely not be using partisan/ideological screens for deciding whose applications for tax-exempt status to investigate.

Several things should be noted that somewhat reduce the outrageousness of what occurred:

So far as we know, none of the organizations were denied the status for which they applied, but many of them had their applications held up for many months and even years.

The seriousness of this one keeps creeping up. Early reporting suggested that the objectionable policy was limited to a small number of relatively low-level officials in the Cincinnati regional IRS office. On Tuesday, Washington reporters learned that at least knowledge of the problem had reached as high as the IRS acting national director, but it’s not yet known what role any of the higher ups played once they knew about the problem.

President Obama condemned the practice as soon as he found out about it (so far as we know) and made clear that after a fair, thorough investigation, those responsible would face consequences. A definitive report on the problem by the inspector general of the IRS was anxiously awaited until yesterday, when reporters learned that the report was completed. But reporters who received a copy said that it was so heavily redacted that, for example, there was no way to figure how the offending policy was adopted in the first place.

Attorney General Eric Holder said yesterday that he would investigate whether the abuse of IRS discretion might rise to the level of criminality and the FBI has opened such an investigation.

For scandal-hype purposes, the simple Tea-Party-groups-harrassed-by-IRS-under-Dem-administration version of the story led John Stewart to satirically declare:

Congratulations, President Barack Obama. Conspiracy theorists, who generally can survive in an anaerobic environment just had an algae bloom dropped on their [bleep]ing heads.

This third and most recent of the three potential scandals is the least developed so far. Here’s what we think we know.

Without notifying the Associated Press at the time, the Justice Department subpoenaed and acquired the records for several phone numbers connected to the AP. Last week, Justice notified the AP that it had done so. The inquiry did not extend to what was said on the calls, only who called whom.

The Justice Department has confirmed that the inquiry is about leaks of classified information. Attorney General  Holder said Tuesday that the leak was one of the gravest he has seen in his long career as a federal prosecutor, and that it placed American lives at risk.

The government has not officially confirmed this, but given the timing of the calls in question, it appears likely that the investigation related to a May 7, 2012, AP report about a classified operation in Yemen that successfully foiled a plot to blow up an airliner. The AP’s attorney says that the news service had actually held the story, at the government’s request, in order to reduce any potential damage to national security concerns.

He also said that the government should at least have notified the AP before executing the search so the AP could have appealed to a court and a judge could have made the determination about whether the national security interests were sufficient to overrule the First Amendment press-freedom considerations.

As a journalist, I share the AP’s concern about efforts to monitor contacts between journalists and confidential sources.

According to the Bloomberg news organization’s coverage:

Under [Attorney General Eric] Holder, the Justice Department has prosecuted more government officials for alleged leaks under the World War I-era Espionage Act than all his predecessors combined. The Obama administration has brought indictments against five government workers for leaking information.

Several congressional leaders of both parties have denounced the subpoenas. Some Republicans have tied it to the “talking points” and the IRS/Tea Party stories on the basis that in all three cases the White House has said that President Obama was unaware of the incidents.

Writing for the American Prospect, Paul Waldman joined those who predict that impeachment talk will take over:

Republicans will begin calling for President Obama’s impeachment; first it’ll be a few nutbar Tea Partiers, then it will spread to some of the seemingly more sane ones, and finally the desire for impeachment will be nearly universal on the right. John Boehner will know in his heart that it’s a terrible idea, but he may be confronted with a rebellion: schedule an impeachment vote, or face a leadership vote. Boehner’s choice could be between impeachment and seeing Eric Cantor take his job (whereupon there’d be an impeachment vote anyway).

Waldman then compared the latest incidents to Watergate, Iran/Contra and Clinton’s sex scandal:

Those were real scandals… Maybe this time around we’ll discover something no one has even contemplated—say, that Hillary Clinton discovered a low-level State Department functionary who was about to blow the whistle on her secret romance with a Mexican drug lord, whereupon she killed him with her bare hands. But probably not.