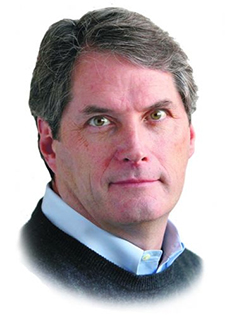 Businessman Mike Sweeney, currently serving as chairman of the Star Tribune, says it’s the best gig he’s ever had. He says that covering government in a one-party state presents special challenges to a newspaper. He asserts that the paper is living down its old “Red Star” reputation. And he completely rejects the popular canard that the paper’s economic interest in the new Vikings stadium influences its coverage.

In an interview with Larry Jacobs at the Humphrey School Tuesday, Sweeney also said surprisingly nice things about MinnPost’s place in the local journalism scene. (The quote was “contributes to a deeper and richer understanding” of our community.)

Oh, and Sweeney said that when the current ownership wants to sell the paper – a time that is in the foreseeable future – if the only willing buyers are the Koch brothers, then such a sale could happen.

Sweeney , who is also CEO of Steinway Musical Instruments (yes, the Steinway Piano people) claims (and I believed him) that overseeing the Strib on behalf of its accidental owners is “the best business experience I’ve had.” (The owners are accidental because they acquired control when the last group of intentional owners walked away, owing the accidental owners a few hundred million.)

Compared to the bankrupt operation he took over, the Strib is a “relatively healthy company,” Sweeney said. Revenue from circulation is up, he said, which may have been a nice way of saying that overall revenue has still not bottomed out.

The old model, when newspapers were virtual monopolies and cash cows, is permanently “cracked,” Sweeney said, and it ain’t coming back. “This guy ‘Craig’ started his ‘list,’” Sweeney said as a shorthand summary of the many contributions that the Internet has made to the cracking of that model.

The Cowles family, which sold the Strib for about $1.4 billion in 1997, may not have timed the sale at the last moment before the value of newspapers started to decline, Sweeney said, “but if they missed the top, they missed it by about a week.”

Unless he’s a brilliant actor (maybe), the political role of the newspaper seems to be a kick for him. He wrote a controversial op-ed piece (and part of the controversy was simply that he, the newspaper’s chairman, signed it) expressing concern that the DFL had overreached  in the just-completed session, but he also started by blaming Minnesota Republicans for going so far right in the previous session that they “deprived our great state of a two-party system.”

Sweeney presents himself as a raging moderate. He also suggests that he has little influence over the newsroom (“the fastest way to prove how irrelevant I am would be for me to make a suggestion.”)

So, on that Koch brothers thing. The question arose on a question from the audience, undoubtedly inspired by some recent suggestions that the Kochs might experiment with buying newspapers.

“The time is coming when Wayzata Investment Partners [the partnership that owns the biggest share of the Strib] will want to sell. I spent time on it today,” he said. The owners are certainly interested in what price their property will fetch, but they are also mindful that to a city like Minneapolis, a newspaper like the Strib is a “community asset.”

“We also have a special role in the community,” Sweeney said. He said “community asset” more than once. I assume that’s supposed to imply that owners would allow certain non-financial considerations to enter their thinking.

His attempt to imply what he wasn’t willing to say caused Jacobs to tell him that he was leaving the possibility of a Koch purchase “up in the air.” So Sweeney tried to leave it at this: When the owners are ready to sell, if the only offer they get comes from the Koch Brothers, “it could happen.”

You can take that how you choose. My best guess is that that’s something of a warning to other potential buyers not to put the current accidental owners in that position.