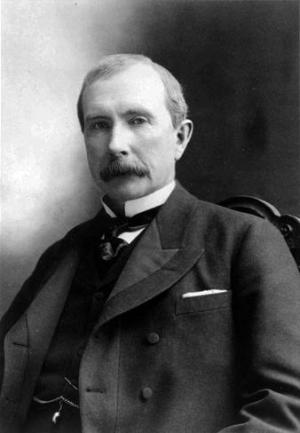 Wikimedia Commons
People try to keep up with Jones, not the Rockefeller family

Answering the question in the headline is way above my pay grade. For the moment, I raise it mostly to suggest that you check out this piece in the Blog Cabin by my righty friend Peder DeFor, who suggests that the current high concentration of wealth and income doesn’t trouble him as much as they do me, Robert Reich, a former secretary of labor, and most lefties.

(An aside: I’ve known Peder for years, first as a commenter on my old Strib blog, and now as a friend in a category of friend I value highly because we are able to civilly discuss issues across the left-right divide. If you don’t have any friends like that, I recommend acquiring some. It’s easier to talk with people that agree with you, but you don’t learn as much.)

A common view on the right is that the left seethes with the politics of envy. Calling it the “politics of envy” is a pejorative, suggesting that, like a certain kind of Bolshevik, the left cares more about making the rich less rich than about making life better for the poor and the middle class. Peder doesn’t make this claim, but it’s implicit in these passages, which captures the essence of his argument:

“That isn’t how wealth works. For instance, even as wealth inequality has been growing, the average house size has too. The middle class of today owns more house, better cars and is able to afford more entertainment than they could have a generation ago. In real terms, each generation is wealthier than the previous one. If you want to visualize wealth as some kind of divided pie, then you have to understand that the pie is growing larger and larger…”

“It wouldn’t bother me if the top 1% had 90% of the wealth if the rest of us could still live well. This is the heart of how the right understands wealth distribution. We think that people will try to keep up with Jones, but not the Rockefeller family. As long as we still have sustainable paths for average people to create the lives they want, the overall American dream is fine.”

Peder concedes that some level of wealth concentration would be problem, but he doesn’t know what the level is. I concede that not every dollar in the Koch Brothers’ or George Soros’ net worth is a dollar that might otherwise relieve the hunger of a poor American. There is some magic to wealth creation that is beyond a zero-sum game. And we both concede that we don’t know the ideal level of wealth distribution. I even concede some truth to Peder’s point that, depending on how you measure it, a middle-class American of today is better off than his middle-class ancestors.

Of course, at a less cosmic level, the perpetual left-right argument is about whether there are things a government can do to both help people that need help and stimulate economic growth and what these things are.

Not to be snotty, but I must mention two things about the first graphic that Peder posted: